Nearly 200 derelict vessels to be removed

Contractors including salvagers, marine surveyors, project managers, recyclers and others are putting on their thinking caps, trying to figure out the best way to dispose of some 200 derelict vessels …

END_OF_DOCUMENT_TOKEN_TO_BE_REPLACED 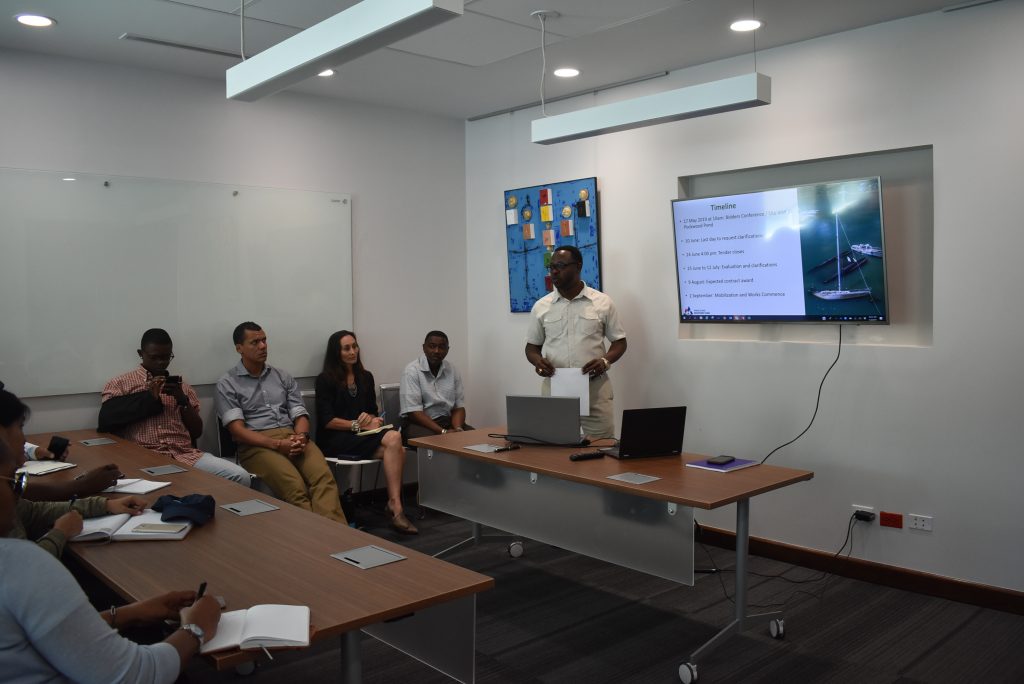 Contractors interested in bidding for the derelict vessel removal project introduce themselves at a bidders’ meeting on Friday at the Recovery and Development Agency headquarters. (Photo: CLAIRE SHEFCHIK)

Contractors including salvagers, marine surveyors, project managers, recyclers and others are putting on their thinking caps, trying to figure out the best way to dispose of some 200 derelict vessels that still litter the territory after Hurricane Irma and represent one of the Recovery and Development Agency’s biggest projects yet.

However, there’s one problem, RDA lead planner Saskie Laing explained at Friday’s tendering meeting at RDA headquarters: fibreglass. Though the material is a major component of boats, the Virgin Islands currently doesn’t have the capacity to dispose of it locally.

“As you’re all aware, this is not a clean waste stream,” Ms. Laing told the approximately 50 people who attended the meeting. “We’re left with fibre- glass hulls, and that’s something we’ll be looking for solutions with.”

The RDA has already researched various options, including utilising the fibreglass as a fuel source in the process of making cement.
“There is potential in the [United States] for that capability,” Ms. Laing said.

And although fibreglass is sometimes incorporated into concrete, she explained that the fibreglass used in boats contains wood, which may degrade, making it undesirable for use in concrete over time.

“So that’s an option we haven’t explored,” she said. Another option is incineration to generate electricity, though as Ms. Laing noted that the Pockwood Pond incinerator is currently nonfunctional after a recent fire.

Ultimately, the solution will be up to the business or businesses that win the contract.

“We’ve considered lots of options to put it out to you as the experts to come up with innovative solutions to deal with this in an environmentally sustainable way,” she said, “and we’re looking forward to exploring those options.”

So far, companies involved in boat disposal have largely been removing the fibreglass and exporting it to dump sites abroad. The RDA, however, is hoping a local solution can be found.

RDA officials explained the layout of the waste staging site, which will contain separate areas for fibreglass storage and silos for other waste streams.
Non-fibreglass waste — such as metals, glass and plastic — will be sent to different areas, either for incineration, recycling or landfilling.

As much as possible, the RDA prefers that these activities take place in the territory.

The removal project includes 181 vessels identified as derelict, plus an additional 23 that have been identified for auction, for a total of 204.

“If those vessels are not sold, they will be incorporated into the derelict boats disposal packages,” Ms. Laing explained. “Essentially we’re talking about a three-step process. We’re moving the vessels from their current locations across the territory under the water. We are then moving them to a staging site where they will be systematically processed into their waste streams. And then the third component is the actual disposal or recycling of those waste streams.”

Two more work packages consist of the staging and processing and the actual disposal, for a total of nine packages.

“There are a small number of vessels that may be sold; some may be removed by their owners,” Ms. Laing added. “There is some flex in the numbers.”

The sheer number of vessels makes the boat removal project the biggest job yet performed by the RDA. Government estimated soon after the storm that about 80 percent of boat stock was damaged or destroyed, and though many vessels have gradually been salvaged, repaired or shipped out of the territory, partially submerged wrecks are still a common sight.

In October 2018, Raman Bala, receiver of wrecks and acting director of the Virgin Islands Shipping Registry, announced that boats would be removed in accordance with the Disaster Management (Amendment) Act of 2018. In August, notices were affixed to about 300 vessels around the territory that appeared to be abandoned.

The list of boats was published in the Gazette to help ensure their owners had a chance to claim them. Of some 300 vessels initially identified, about 120 have already been removed by other means.

Challenging as the project is, RDA CEO Paul Bayly called it “a really important project for the BVI.”

“It’s really fundamental we do a good job with this,” he said. “We are really interested in environmentally appropriate solutions for this. There’s a lot of money going to be spent here; we want to keep as much of this money on island as possible.”

He encouraged attendees to network with each other and even to team up.
John Primo, the RDA’s head of procurement, added, “Part of this tender is we are encouraging local contractors to form joint ventures if possible.”

The process is far from over. Next week, potential bidders will tour the staging site in Pockwood Pond before submitting their bids on Aug. 9.

Work is set to begin by September.

“This is our timeline,” Mr. Primo said. “It may change depending on how things go.”

As contractors asked questions, it soon became clear that the multistage process was outside what most of them have accomplished before.

According to Anthony McMaster, permanent secretary at the Ministry of Communication and Works who is currently working with the RDA, the agency plans to engage Nanny Cay, where workers will stage a demonstration by breaking down a boat and dis- posing of it on a smaller scale.

“You can actually visit the site and see the process, because we are supposed to be using a process similar to the one that we outlined here,” he said.

Joceran Gichuke, head of technical planning at the RDA, said contractors will be assessed in eight categories using standards developed by the Caribbean Development Bank and the World Bank, with “work process” accounting for 25 percent of the total. The results are then evaluated in combination with the tender price to make a decision.

“We are seeking environmentally sustainable, efficient and cost-effective proposals for the use and disposal of the waste streams,” she said. “The waste streams must be disposed of in a transparent and accountable way. We need to trace it from the shoreline all the way to its final use or its disposal site, and we are striving to achieve high environmental standards and utilise local capacity or build local capacity.”