As the Virgin Islands received negative test results for a possible case of the COVID-19 coronavirus in the territory, the Caribbean Public Health Agency reported that the first cases in …

END_OF_DOCUMENT_TOKEN_TO_BE_REPLACED 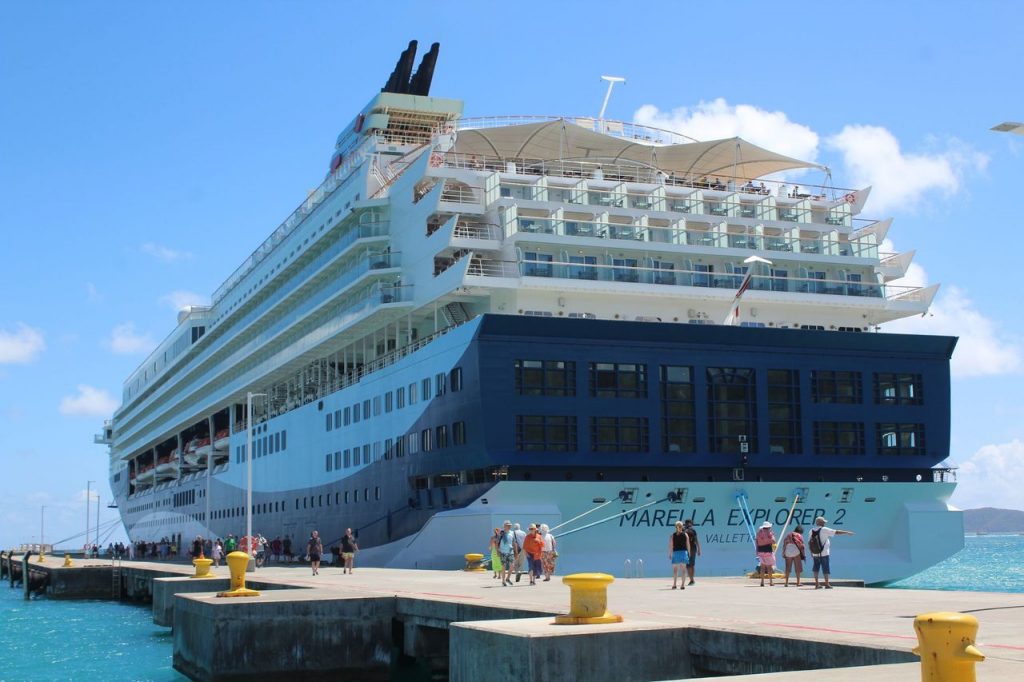 In February 2020, a cruise ship was turned away from Tortola after officials learned that passengers aboard the ship were ill and not yet tested for the coronavirus. (File photo: ZARRIN TASNIM AHMED)

As the Virgin Islands received negative test results for a possible case of the COVID-19 coronavirus in the territory, the Caribbean Public Health Agency reported that the first cases in the Caribbean were confirmed in St. Barts and the Dominican Republic on Sunday. Brazil, Ecuador and Mexico also have confirmed cases within their borders, according to CARPHA, and two confirmed cases in French St. Martin were reported by regional news outlets.

No deaths have been reported in the Caribbean as a result of the virus.

In the VI, the National Emergency Operations Centre is now operating at Level One following the identification of a possible case. On Wednesday afternoon, the results of the test came back negative.  When the affected resident was placed under quarantine, however, rumours spread quickly across social media last week before the government made an official statement.

Premier Andrew Fahie and Health and Social Development Minister Carvin Malone held an emergency press conference around 3 p.m. last Thursday to reassure residents that no case had been confirmed, and to explain that measures are being taken to ensure the safety of residents.

Mr. Fahie said a person from the VI who travelled from abroad between Feb. 21 and 23 had shown symptoms of the virus and was quarantined at their home.

“They have been questioned and visited,” Mr. Malone added. “Samples have been sent to Trinidad. And it’s a two-to-three-more-days turnaround. Officials told me they were just informed on [Feb. 26], and I was informed [last Thursday] morning.”

After Beacon press time yesterday afternoon, officials circulated a press release stating that three residents were tested by CARPHA and all the results were negative, including the belonger who was placed under quarantine.

As of Tuesday, a government press release stated that there still were no confirmed cases of the virus in the territory. Further questions were raised by a situation report published Monday by CARPHA, which states that the CARPHA laboratory ran four tests on a single patient from the VI before Friday, and those tests had all come out negative.

CARPHA officials directed all inquiries to the VI Ministry of Health and Social Development, which did not respond to requests for comment before press time.

CARPHA also ran tests on suspected cases in countries including Trinidad and Tobago, Jamaica, St. Lucia, Bermuda, and St. Vincent and the Grenadines. All of those tests, the report states, came out negative. On Monday night, the United States VI Department of Health reported that there were three suspected cases in that territory as well.

Testing in the VI

BVI Health Services Authority CEO Dr. Ronald Georges, who was also at the press conference last Thursday, said the government is attempting to get testing capabilities within the territory.

“We have ordered test kits. There are some additional requirements that we have to do to be certified, and we’re hoping to have that completed within about a week or so,” Dr. Georges said.

Officials did not name the person who is under quarantine. At the urging of the press, however, Mr. Malone said the person came through the airport on the night of Feb. 22 with five other passengers, but did not say where they were travelling from. The government has the manifest, which includes foreigners, he added.

Officials stated during the press conference that they were in the process of tracking those passengers.

“We have that under control and we will continue to monitor that,” he said.

In case there is an outbreak of coronavirus in the territory, Dr. Georges said mild cases may be quarantined at home, but severe cases would have to go to the hospital under isolation.

Officials denied that they called the press conference because of the WhatsApp messages circulating about the suspected case.

“Rumour travels much quicker than facts,” the premier said. “It didn’t force us out to just respond to the WhatsApp. We’ve come now to clarify what was out there that it doesn’t put people in unnecessary panic and cause our economy to freefall.”

Mr. Malone said it would be “irresponsible” to say that the press conference was held in response to the messages.

“There is no attempt to hide any of the information,” Mr. Malone told media. “I called you.”

Mr. Malone posted a video on his Facebook page on Monday night addressing residents about the status of the virus, what precautions to take against it, and what government is doing to prevent the spread.

“As of March 1, the World Health Organization has increased its assessment of the risk of spread and the impact of the disease to very high at the global level,” Mr. Malone said.

He also mentioned his remote attendance at the eighth emergency meeting of the Caribbean Community on Sunday in Barbados. There, leaders agreed to establish a regional protocol for minimum standards for dealing with the virus.

Along with heads of government and ministers of health of CARICOM, the meeting was attended by representatives of the Pan American Health Organisation, the CARPHA, the Caribbean Disaster Emergency Management Agency, the CARICOM Implementation Agency for Crime and Security, and the cruise ship industry.

In the VI on Tuesday, Governor Gus Jaspert released a statement informing residents that the National Emergency Operations Centre is now operating at Level One. This means that the health sector will partner with the Department of Disaster Management and other NEOC structures to share information, activate plans, identify resources, and intensify readiness efforts in order to adequately be prepared to deal with the virus, he explained.

“Residents should not fear this announcement, but should be reassured that government is taking the risk of a new virus arriving on our shores very seriously,” he wrote.

The government will allocate “initial funding” of $3 million to “assist with preparedness and response efforts,” according to Mr. Malone.

On Feb. 26, government also turned away a cruise ship with passengers traveling from Italy, which has been hit hard by the virus.

“In light of the public and health safety actions being taken in Italy in reaction to COVID-19, including the quarantine of select cities and cancellation of its own carnival activities, a decision was made to err on the side of caution,” a government press release stated.

The statement noted that three passengers aboard the Costa Favolosa tested positive for influenza virus, but that the ship did not have the testing capabilities to determine whether any passengers had coronavirus.

It is unclear if anyone aboard the ship was quarantined — though Mr. Fahie said the government “was convinced” that they were — or if those who showed symptoms have been tested for the virus yet.

As of Tuesday, WHO General-Director Dr. Tedros Adhanom Ghebreyesus reported that there have been 90,893 confirmed cases of the coronavirus in 65 countries, resulting in 3,110 deaths. Globally, he said, 3.4 percent of all reported cases have resulted in fatalities.