NEOC will finally get new building

About eight years after plans were initially drawn up for a new Department of Disaster Management building, the agency is now able to move ahead with the design and construction …

END_OF_DOCUMENT_TOKEN_TO_BE_REPLACED 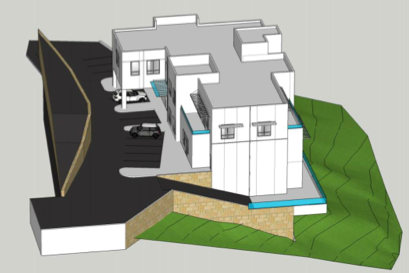 A rendering shows what the National Emergency Operations Centre building is expected to look like after it’s completed. (Photo: PROVIDED)

About eight years after plans were initially drawn up for a new Department of Disaster Management building, the agency is now able to move ahead with the design and construction of a state-of-the-art facility.

For several years, Director Sharleen DaBreo warned legislators that the DDM’s McNamara headquarters — which has long served as the territory’s National Emergency Operations Centre — couldn’t withstand a major storm and desperately needed the funding for a rebuild.

When Hurricane Irma hit last September, the DDM building was destroyed, forcing those inside to flee during the eye of the storm.

But now, as Ms. DaBreo put it at a community meeting last week, there is a renewed sense of opportunity to build a better facility.

“We’ve had to wait a little while to get to where we are,” she admitted.

Government has procured a loan through the Caribbean Development Bank to fund the construction of the building, which will cost about $4 to $5 million, officials have said.

The Puerto Rico-based company Virella Crespo & Associates has been working this month to review construction drawings for the project and plans to finish the overall design plan by late December.

“We are looking forward to continuing to work with Virella Crespo. They have been a partner with us for many, many years and are very reliable,” Ms. DaBreo said.

A tendering process for the construction itself is scheduled to begin in the first quarter of 2019. Officials anticipate that construction work will then start in April or May, and take about 16 to 18 months.

At last week’s community meeting, DDM employees and engineers from Virella Crespo gave residents more details about various design elements that will be featured in the new NEOC building.

The structure will also be designed to withstand wind speeds of 220 miles per hour, will include fire-rated stairs and fire suppression systems, and will be handicap accessible.

The ultimate goal of the architectural design is to use scarce resources more efficiently and to “adjust to and cope better” with future hazards and climate change, according to Virella Crespo.

DDM first received approval from Cabinet to design a new NEOC in 2010.

Though Cabinet approved the project, legislators never allocated the funding to start construction. Ms. DaBreo advocated for the new building for years, including at a Standing Finance Committee sitting in 2016.

“She explained that one of the things that she wants the [House of Assembly] members to truly understand is that if there were to be a major event occurring in the region and the facility itself is unable to allow for a distribution of a warning or alert, the BVI is going to lose a number of people,” the 2016 SFC report summarised, adding, “She noted that it would create a significant challenge to get the message out if they are in a structure that does not have the ability to stand up.”

Last year, DDM faced some of the same challenges when it lost its building.

“The structure is gone,” Ms. DaBreo told the Beacon in October. “It really hampered our ability to continue to operate, but we did.”

The NEOC temporarily relocated to Peebles Hospital, and then to the Ritter House on Wickhams Cay II. More recently, DDM has been operating out of a space in Simms Mini Mall.

Though the new facility has been a long time coming, officials are optimistic.

“I think it’s an exciting time,” Carolyn Stoutt-Igwe, acting permanent secretary in the Deputy Governor’s Office, said at the community meeting. “It’s a pity it couldn’t come a little bit earlier, but we are really looking forward to the commencement of the project.”

“This is our building, and we’re going to make it right,” she said.