With respect to elections, Governor Gus Jaspert’s job is done — for now. He has signed the writs appointing Thursday, Feb. 14 as Nomination Day and Monday, Feb. 25 as …

END_OF_DOCUMENT_TOKEN_TO_BE_REPLACED 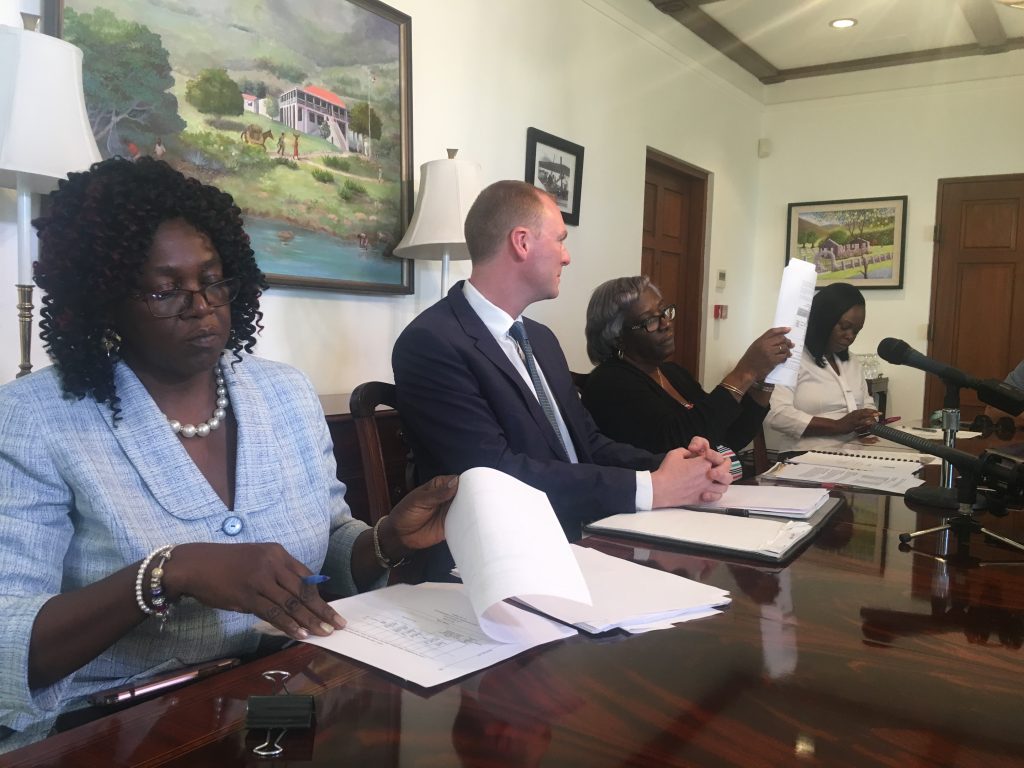 With respect to elections, Governor Gus Jaspert’s job is done — for now.
He has signed the writs appointing Thursday, Feb. 14 as Nomination Day and Monday, Feb. 25 as Polling Day. Now, like most residents, he waits for the results to roll in.

But with new parties, new regulations, new voting equipment and new rules, this election day is set to be markedly different from previous years.

During a joint press conference on Monday at Government House, the governor and Supervisor of Elections Juliette Penn confirmed that this year marks the first election in the territory where machines will be used to scan ballots, which means there will be no more hand-counting. Paper ballots will still be used, though there will be only a single ballot for both district and at-large candidates, she said.

Ms. Penn acknowledged hearing a few concerns about the new equipment, which includes DS200 tabulators and e- poll books to keep track of the voter rolls.

However, voters have “nothing to fear from the new machines,” she said. “I can assure the public that it’s nothing to worry about because we’re in the process right now of training our officers.”

Those training sessions are taking place until Election Day, she said, and she and her office have been striving to educate voters ever since they tested the new equipment at September’s mock election.

And just as the mock election took place in the Multi-purpose Sports Complex, Ms. Penn said that the complex will serve as the epicentre for this year’s results, with the public invited to observe as the counts come in.
However, unlike during the nail-biting vigils of previous years, the new voting equipment will likely return results within a few hours.

“All the counting of votes will be done at the centre,” she said, including both at-large and district races, with each district using thumb drives to transfer the results. “You won’t have that night-into-morning process.”

At least one independent candidate and four political parties — the National Democratic Party, the Virgin Islands Party, the Progressive VI Movement and Progressives United — are currently vying for office. But more contenders could come forward before Nomination Day. On that day, Feb. 14, nominations will take place from 10 a.m. to 1 p.m., and then again from 2-4 p.m. The final list of candidates will be revealed at the end of the day.

This year, because of the increase in the number of parties, political parties will be allowed three agents to monitor their interests at polling stations, according to Carolyn Stoutt-Igwe, the permanent secretary in the Deputy Governor’s Office. Only two can be in the station at the same time, however.
Independent candidates will continue to be allowed two, with only one in each polling station at a time.

A preliminary list of voters has already been issued, she said. After making corrections, that list will be finalised today. Already 14,821 people are registered to vote for the 2019 elections, an increase from 13,589 in 2015.

Although the governor acknowledged that tensions tend to run high during an election period, he declined to comment on the behaviour of specific candidates or campaigns, instead pointing back to the recent approval in the House of Assembly of an election code of conduct.

The code, he said, is “very clear about the expectations of campaigning….That’s what we should be looking at in terms of
correct conduct during the election period.”

A draft of the new code of conduct — a measure that has been advocated for locally since at least 2007 — was released last November, and a final version was included in the recently passed Elections (Amendment) Act, 2019.
Several prohibited actions were outlined in the draft, including a ban on candidates making “unrealistic promises.”

However, Ms. Stoutt-Igwe said that the promises clause was removed from the final code “because it was felt that it could be subjective.”

Though the amended Elections Act states that candidates must abide by the code, the law doesn’t explain how the code’s rules should be enforced or mention penalties for infractions. Ms. Stoutt-Igwe said Monday that no one has been specifically assigned to monitor compliance, and the code is largely meant to serve as a guideline for parties to self-police their members.

Although voters will be required to present photo identification at polling places for the first time this year, Ms. Penn explained that she recognises that not everyone will be able to comply.

“There are measures in place to allow you to vote,” she said. “No one will be disenfranchised because they do not have a voter ID card.”

She added that advance polling is set to take place from 9 a.m. to 2p.m. on Feb.21, and those eligible to vote include the elderly, illiterate, ill, prison inmates, police officers, election workers and those will be travelling on Election Day.

“With the cooperation of all of you,” she said, “we hope that we will have a very successful and fair and free set of elections.”