As the territory responds to a human pandemic on land, another catastrophe is brewing underwater. The highly infectious stony coral tissue loss disease, which has been spreading south from Florida …

END_OF_DOCUMENT_TOKEN_TO_BE_REPLACED 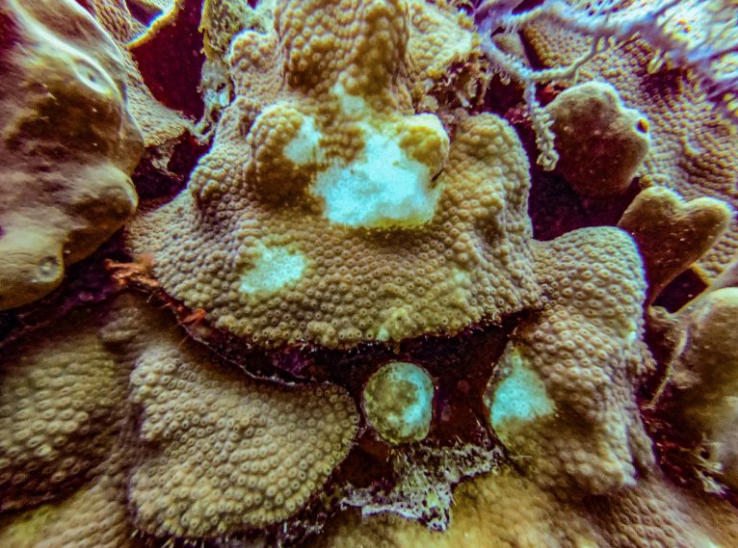 A photo taken by the Association of Reef Keepers depicts a coral infected with stony coral tissue loss disease.

As the territory responds to a human pandemic on land, another catastrophe is brewing underwater.

The highly infectious stony coral tissue loss disease, which has been spreading south from Florida for about six years, was confirmed in Virgin Islands waters last week.

Biologists say it is probably here to stay.

The disease, which spreads quickly and kills most of the coral it infects, poses an existential threat to the territory’s already beleaguered reef systems.

This is terrible news. Reefs play many important roles here: preventing erosion; protecting shorelines from the sort of waves that bettered them during Hurricane Irma; drawing tourists and providing recreational opportunities for residents; providing habitat for fish and other marine life; and providing sand for the territory’s receding beaches, among others.

But even before SCTLD, the territory’s coral was in peril. Consistent long-term data on the overall health of VI reefs is sadly lacking, but various surveys, research projects and anecdotal evidence have noted bad signs: Many reefs are steadily receding, and the territory does not seem to be an exception to the wider region, where total coral cover has declined by more than half since 1970.

Runoff and other pollution are major reasons for the decline, as are irresponsible anchoring, overfishing, and habitat destruction from coastal development.

Climate change, meanwhile, is also threatening coral by warming water temperatures. Scientists’ predictions on the likely result vary widely, but most agree that the Caribbean’s coral faces serious risks. A study released last month by researchers from Bangor University in Wales suggested that most of the region’s 7,722 square miles of reefs could become bleached and sparsely populated in about 15 years, collapsing altogether in 50.

There is hope, however. The Global Coral Reef Monitoring Network and the International Union for Conservation of Nature have noted that countries and territories with sound management plans tend to have much healthier coral cover.

The VI, then, has work to do, and quickly.

Responding to SCTLD is a good place to start. Though the disease is lethal for coral, researchers abroad have devised methods to slow its spread. Antibiotics can be administered to infected coral, and scientists in St. Thomas have taken the drastic step of removing entire sections of some reefs.

Currently in this territory, the non-profit Association of Reef Keepers — which confirmed the disease this week at The Indians — is leading the response by monitoring reefs, applying treatment and educating the public. This work is invaluable.

But ARK will need all the help it can get for such a big job. We hope, then, that other partners will come on board, with the government ramping up its own response and education efforts and businesses and private citizens contributing to the cause as well.

The Cabinet should also reinstate the Climate Change Trust Fund Board that it disbanded shortly after taking office last year, and then ensure that money collected from the tourist eco-levy is used to fund projects overseen by the board as required by law. Fighting SCTLD is exactly the sort of project that the levy and trust fund were supposed to support.

Ultimately, a collaborative effort will be needed to stop this new threat and save the territory’s reefs. And the bigger that effort, the better.

Many may find it easy to forget about the underwater world while dealing with issues like coronavirus, but the importance of coral reefs to the territory’s well-being cannot be overstated.