An aggressive coral disease that can destroy certain species in days has been spotted off the coast of the United States Virgin Islands after spreading down from Florida, and scientists …

END_OF_DOCUMENT_TOKEN_TO_BE_REPLACED 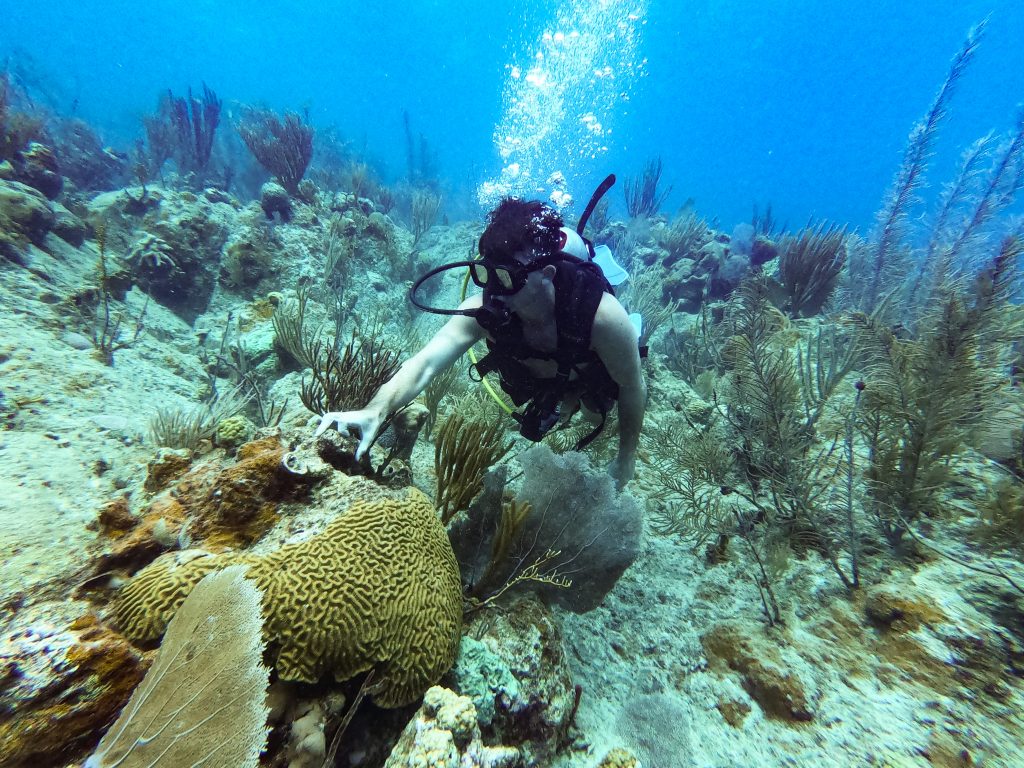 Chris Gregory, a Royal Engineer, inspects a reef near The Indians during a dive that the Association of Reef Keepers hosted on Tuesday to search for Stony Coral Tissue Loss Disease in Virgin Islands waters. (Photo: ARK)

An aggressive coral disease that can destroy certain species in days has been spotted off the coast of the United States Virgin Islands after spreading down from Florida, and scientists believe it will soon reach this territory’s waters — if it’s not here already.

Stony Coral Tissue Loss Disease shows up as lesions that can spread a couple of centimeters each day, according to Dr. Shannon Gore, director of the Association of Reef Keepers.

“Within a month, you’ll have the entire coral head gone,” she said.

Since it was first identified off the coast of Florida in 2014, SCTLD has affected more than 96,000 acres of reef, the Smithsonian Magazine reported.

The disease has spread 250 miles down that coastline, moving at about five kilometers per month, according to a preliminary report by William Precht, director of Marine and Coastal Programs for Dial Cordy and Associates Inc., an environmental and ecological management service with offices in Florida.

In the report, Mr. Precht described “the onset of one of the most contagious and deadly coral diseases ever recorded.”

Early this year SCTLD was spotted off the coast of the USVI, and it’s been sighted off St. Maarten, the Turks and Caicos Islands, the Dominican Republic, Mexico and Jamaica, Dr. Gore said.

The disease is transmittable through water and it can decimate reefs within weeks. Of the 45 species of reef-building corals that occur on the reef tract in Florida, the disease has hit 22 of them.

Coral Ecologist Marilyn Brandt from the University of the VI in St. Thomas recently told Science News that SCTLD is “annihilating whole species.”

“It’s not something we should sit around and wait for it to happen, because it’s something that we can do something about,” Dr. Gore said.

Scientists and researchers are studying ways to combat the disease. Applying antibiotics on coral has proved effective, and another preventive method involves moving healthy colonies to tanks where they are protected from the outbreak.

But these are only short term solutions and scientists are looking into longer term treatments as well. At least one probiotic has been identified which may increase disease resistance on corals, according to Smithsonian.

Efforts to learn whether or not the disease has hit the VI are in progress. Having secured two grants for the mission, Dr. Gore organised five dives on Tuesday dedicated to spotting the disease. Team members photographed lesions on some corals and will revisit the same corals next week to see if the lesions have spread.

“If so, this will confirm SCTLD has spread to the BVI,” Dr. Gore said.

Additionally, she has created posters to help divers identify SCTLD and inform them on what to do if it’s spotted. Some of the most susceptible species include flower and cup corals, brain corals, pillar corals, and boulder corals.

Dr. Gore’s flyer urges people to be on the lookout for large areas of bright white colouration and to report any sightings to info@bviark.org or to call or text 546-0164. 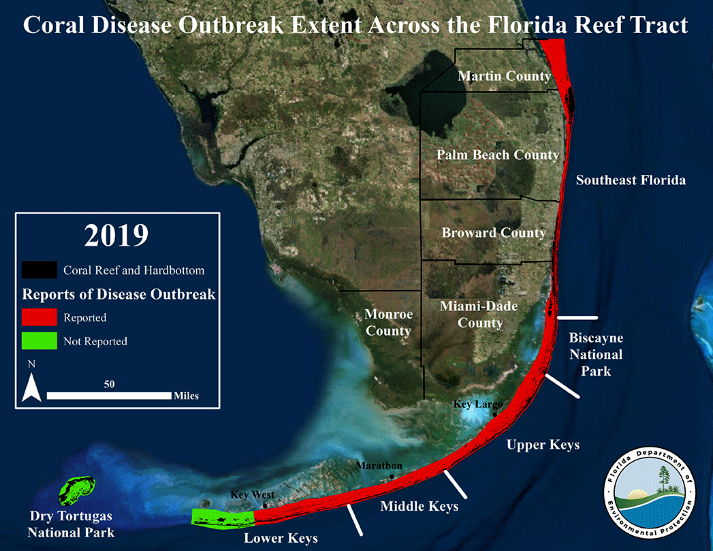 This isn’t the first time a coral disease has spread in the region. There are up to 30 known diseases that affect Caribbean coral, according to Dr. Graham Forrester, an aquatic ecology professor at the University of Rhode Island who has studied reefs in the VI since 1992.

The new disease has already killed a lot of corals in the Caribbean Sea. The most effective way to fight back, he said, is to improve the environment for the reefs.

Biologist Dr. Lianna Jarecki — who often works alongside Dr. Forrester in the VI — agrees with this view.

“If you’re healthy and eating good food, you don’t get sick as often. What happens is the coral reefs are becoming more sensitive to the existing pathogens in the environment because they’re stressed from warmer sea temperatures, from sewage pollution, from anchors turning them upside down all the time,” Dr. Jarecki explained. “There are so many things that if the environment is healthy, then the corals are able to resist on their own.”

She stressed the importance of the reef monitoring work that she and Dr. Forrester do because it provides a detailed picture of what’s happening under the sea.

“We don’t see it every day, but we know we depend on it,” she said. “It’s important to know what’s happening so we can react.”

Drs. Forrester and Jarecki have been conducting research in the territory since 1992, including an ongoing effort to track the reefs around Guana Island.

“At the time they were much more alive and beautiful than now,” Dr. Jarecki said of their earlier work. “I think at this point we have the longest-running reef monitoring for the BVI and one of the longest in the Caribbean.”

Their work around Guana has been used as part of a regional analysis designed to help understand the state of Caribbean coral reefs, including how they’re changing and why. The data they gathered was part of a Caribbean-wide summary published in 2013.

Recently, scientists throughout the world have decided to contribute monitoring data that they’ve collected between 2013 and 2019 as part of a global study set for publication next year. Data on the Pacific Ocean and the Great Barrier Reef will be in the study, as will the work Drs. Forrester and Jarecki are doing.

“The goal is to publish in a peer-review scientific journal, which is then available to the global scientific community and beyond,” Dr. Forrester said.

The scientists have also studied threats to coral that aren’t directly related to global warming or disease. In 2015, Dr. Forrester published a study that focused on the impact of anchoring on coral reefs and stated that anchoring “has a surprisingly big effect on coral reefs in the BVI.”

In fact, the study suggests that marine areas where lots of vessels anchor have an average of 40 percent less coral cover and 55 percent fewer fish than sites with low amounts of anchoring activity. The study was likely the first large-scale study in the world to quantify the amount of damage done by anchoring, according to Dr. Forrester.

Though climate change is one of the main reasons the Caribbean is seeing a loss of corals at an alarming rate, Drs. Forrester and Jarecki are focused on the issue of anchoring because it’s something that they believe can be largely solved in the VI with the cooperation of charter boat companies.

Most of the damage done to coral reefs by anchoring happens because the chain attach- ing a boat to its anchor will move across the ocean floor, side to side, and overturn large coral. One such coral that the team found recently was about six feet tall and as wide as a human — too heavy for a scuba diver to push back upright.

“One of our sites, which was really beautiful, is completely dead now from chronic anchoring,” Dr. Jarecki said. “Usually we think of moorings as a solution so people don’t have to use anchors, and that works, but there still has to be a way of preventing anchoring.”

“There’s a minority of people who will just choose to anchor or go somewhere else where they anchor,” he said. “If you can figure out why they make those decisions it will be helpful to see how to reduce the anchoring rate. The BVI can do a better job of managing its yachting industry.”

But, the scientists said, they do not advocate the government for policy reforms: They are primarily here to do research, collect data, and educate the public.

Drs. Forrester and Jarecki both have taught classes at the H. Lavity Stoutt Community College and held training sessions focused on marine studies, and they continue to foster interested students and encourage them to become scientists and researchers.