By August, three new buildings will be erected on the Elmore Stoutt High School campus in Road Town to accommodate senior students who currently attend classes at the former Clarence …

END_OF_DOCUMENT_TOKEN_TO_BE_REPLACED 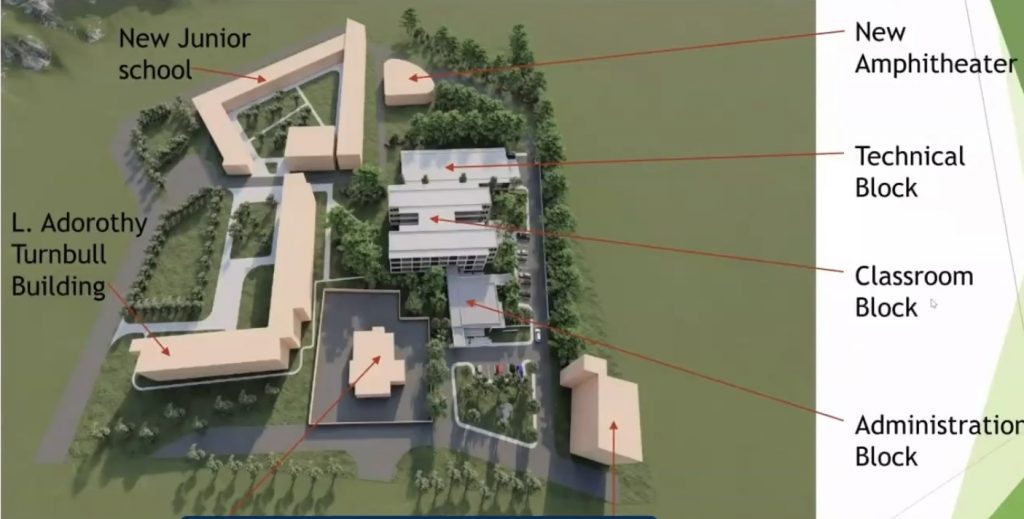 Design plans for the project were unveiled during a virtual meeting on Jan. 19 where officials invited the public to ask questions and provide feedback.

The first speaker was Deputy Premier Dr. Natalio “Sowande” Wheatley, who explained the urgency of the project while deflecting concerns about discarding an older plan drawn up in 2017 under the previous National Democratic Party-led administration.

“People have put information in the public to suggest that there were detailed plans concerning the redevelopment of the ESHS,” he said. “I asked for those plans to be assessed again in light of the information that has come to light.”

Dr. Wheatley, who is the education minister, went on to say that the focus of the next stage for the high school is to move faculty and senior students from the former CTL building before eventually building a junior high school on both ends of Tortola to ease the pressure on the Road Town campus.

The cost of the Road Town project, which includes three interconnected buildings, was not disclosed during the meeting. However, officials said in November that government had allocated $7 million in the 2022 budget for works to be completed this year. Last week, officials said the estimated completion date for the first set of buildings is Aug. 21.

Demolition of existing structures on the campus has already been completed, Dr. Wheatley said.

Floyd Stoutt, a project manager at the Recovery and Development Agency, also spoke during the meeting.

“We are charged with the implementation and the execution in providing the new ESHS campus for the senior students and relocating them from the Pasea campus,” he said.

He listed issues with the current arrangements at the former CTL building, including poor air quality, noise from other commercial activities, concerns about the impact to surrounding businesses, and growing expenses to keep using the facility despite its problems.

The temporary building has inadequate restrooms for over 500 students, a lack of facilities for teachers, and a mould infestation that has resulted in respiratory problems, according to Mr. Stoutt.

The arrangement necessitated a shift system with reduced learning hours, and students were left unsupervised in the morning and afternoon due to the system, he added.

The proposed buildings in Road Town consist of a new junior school, a new amphitheatre, a technical block, a classroom black, and an administration block, Mr. Stoutt explained.

The blocks will be constructed first, he said. The technical block will contain eight labs to house electrical, food and nutrition, woodwork, welding, metalwork, and auto classes. There will also be restaurant and bar “scenarios” for students to practise their skills, Mr. Stoutt added.

The planned classroom block consists of two buildings, both of which will be three storeys tall.

Both buildings together include a total of 42 classrooms that each can accommodate 20 to 25 students socially distanced, he said.

The one-storey administration block will include a reception area, offices, a storage room, an infirmary with three sick beds, and an IT room, he said.

A corridor connecting the three buildings on the ground floor will allow access from the administration block. All the classrooms will be raised up since the area is prone to flooding, and wheelchair ramp access is included, Mr. Stoutt said.

Members of the public were permitted to weigh in during the meeting, sharing their thoughts and asking questions.

Asked about the cost of the project, Mr. Stoutt declined to share details, citing concerns about making the information public before the tender invitation is issued.

“We do have a budget established,” he said. “Based on the information that we have put in our design, we are on target with that budget. The information will be relevant when the tenders go out.”

Another attendee asked about installing solar panels on the building.

Mr. Stoutt responded by saying that solar energy technology will be incorporated into the buildings, but he didn’t say in what capacity.

Former Education and Culture Minister Myron Walwyn criticised the new ESHS building plan and wrote on Facebook that the Virgin Islands “must get to the point of political maturity where we build on work that was done by previous governments.”

“A comprehensive plan for the redevelopment of ESHS was done by the NDP way before the hurricanes of 2017,” he wrote in a Facebook post. “Let’s start to think country and not self.”

That plan would have been funded by a $9.28 million Caribbean Development Bank loan approved in July 2017, about two months before hurricanes Irma and Maria, according to Mr. Walwyn.

Most of the funds from the loan were to go toward the ESHS rebuild, and government at the time earmarked an additional $4.27 million toward the project.

At least $10 million from the loan and government money was supposed to go into the planned restructuring of ESHS, which included separating junior and senior sections, constructing a new auditorium, upgrading technical labs and improving the perimeter wall.

Construction was slated for October 2017, but the hurricanes halted the project.

During the virtual meeting last week, Dr. Wheatley addressed concerns about tossing out those plans, describing structural issues that he said would have proven troublesome in extreme weather events. For instance, he said the prior plans included a lot of glass, which would have been unsafe in the event of another storm like Irma.

Mr. Walwyn, however, argued that current government officials should incorporate the old plan with the new one. He also advocated for certain proposals he said the CDB loan would have funded, like capacity building for educators.

“Resurrect the existing plans and make the requisite amendments; complete the process with the CDB,” he advised. “Let’s build an institution that could properly serve the needs of our children just as was intended by our government.”

At the end of the Jan. 19 meeting, Dr. Wheatley said schools will return to face-to-face learning on Monday for all students.

A limited group of students is resuming in-person classes this week.

Meanwhile, Chief Education Officer Connie George announced that self-testing kits for Covid-19 will be made available to students. She added that students will be trained in administering the test.

“A letter is being sent out to all parents in the public schools informing them of this,” she said. “There will be a form for you to sign giving consent.”