Elected officials took seats at the back of the Praise and Thanksgiving Service held by the newly appointed government on March 6 at the Cyril B. Romney Pier Park. “It …

END_OF_DOCUMENT_TOKEN_TO_BE_REPLACED 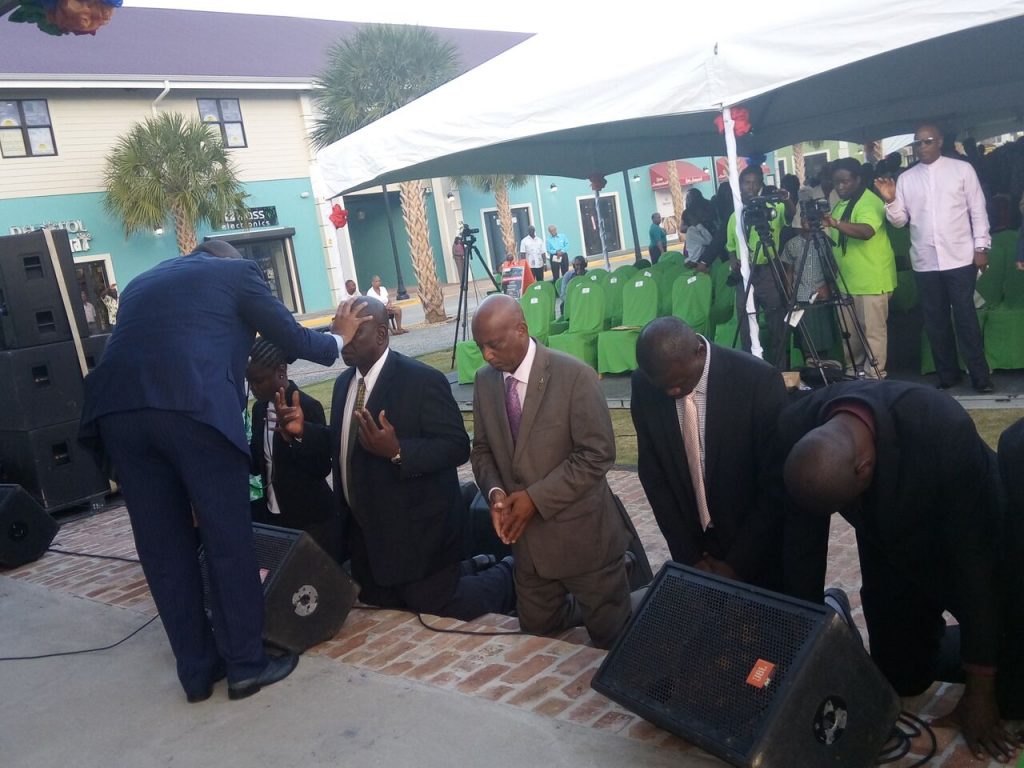 The Virgin Islands Party cabinet kneel while receiving prayers and blessings during the Praise and Thanksgiving Service on March 6 at the Cyril B. Romney Pier Park

Elected officials took seats at the back of the Praise and Thanksgiving Service held by the newly appointed government on March 6 at the Cyril B. Romney Pier Park.

“It is both symbolic and intentional,” Premier Andrew Fahie explained when he took the podium toward the end of the service, adding that the seating arrangement demonstrated the new government’s desire “to be one with the people.”

Mr. Fahie called for an open office where residents can reach their representatives without facing condescension or a dismissive attitude, and he announced plans to hold special meetings this week in all nine districts for youths interested in the marine sector and training provided by the government.

The service also included many messages warning the elected officials against corruption and pride.

“My acronym for the spirit of pride is Please Recognise I Deserve Exaltation,” said Pastor Brian Carn, from Jacksonville, Florida. “Many of us do well until we get what we’re supposed to get. But the minute we get powerful, the minute we get a position, the minute we get to a place of accolade, we forget who got us where God got us.”

Shouts of “amen” were heard through the crowd in the middle of the Pier Park. By the time the service began around 4:30 p.m., hundreds of people filled all 15 rows of seats under white tents and stood along the periphery of the park against storefronts.

Mr. Fahie knelt in prayer, with members of the cabinet and party following suit.

“Make sure you don’t have any ulterior motives,” Mr. Carn said as he placed his hand over the head of each member of the party.

Though the service was open to the public and included prayers for the members of government and the opposition, only VIP members were on stage.

The new ministers of the government were introduced first by Chairwoman Angelle Cameron and then by Governor Gus Jaspert.

Mr. Jaspert commended them for the “hard fought election” and added, “Free speech and healthy debate are crucial ingredients to ensuring that the interests of the people will be represented in the House as we move forward.”

When the attention turned toward the elected members of government present, those in the crowd raised their hands toward the officials.

“The truth of the matter is that success is something that destroys most of us,” Mr. Carn told the eight VIP representatives. “Success is a great thing as long as you don’t use your seat and your success for your own selfish reasons.”

Cheers of “yes” and “hallelujah” rang through the crowd at Mr. Carn’s passionate speech.

“Make sure you don’t have any ulterior motives,” he prayed for the premier. “You must hold on to this thing called humility. There’s a microscope on [you] from this day forward.”

In an effort to include the sister islands, the government provided free transportation from Anegada, Jost Van Dyke and Virgin Gorda. Chief Information Officer Desiree Smith and Premier’s Office officials did not respond to requests for information about the cost of the event.