As the Virgin Islands works to meet ambitious clean energy goals, government last week announced a partnership with a non-profit organisation co-founded by NFL Hall of Famer Ray Lewis, which …

END_OF_DOCUMENT_TOKEN_TO_BE_REPLACED 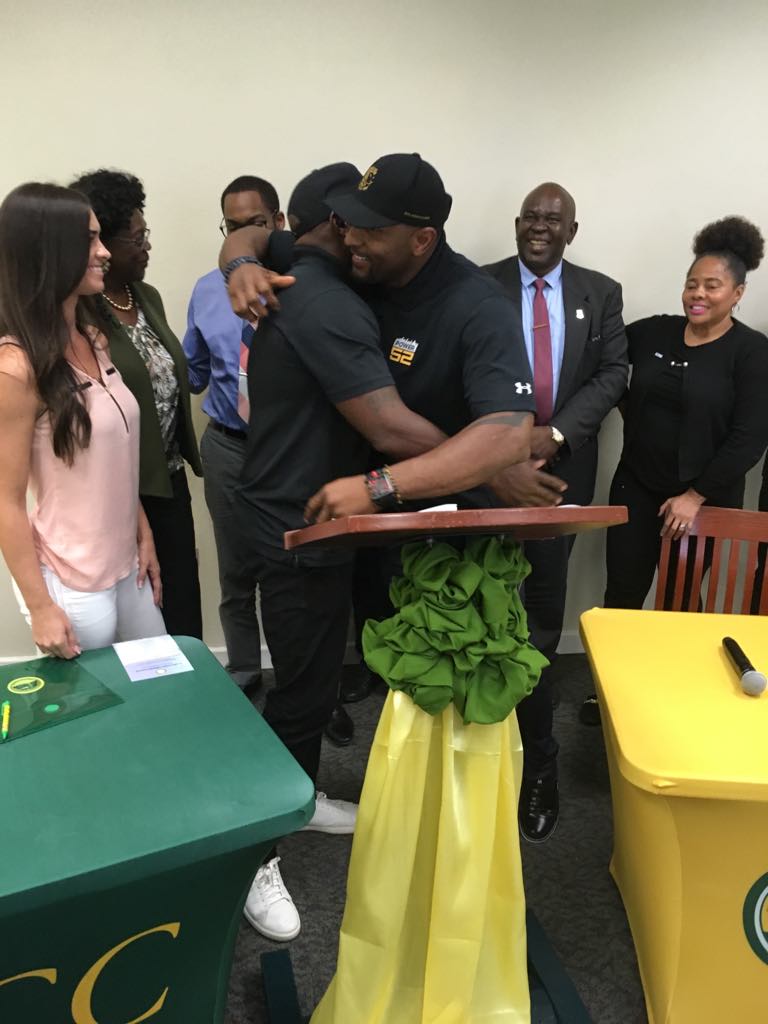 As the Virgin Islands works to meet ambitious clean energy goals, government last week announced a partnership with a non-profit organisation co-founded by NFL Hall of Famer Ray Lewis, which officials said will help develop the workforce to facilitate the transition to renewable energy.

After a storied career playing linebacker for the Baltimore Ravens, Mr. Lewis was searching for a way to empower the youth of that city when he joined with two other partners to create Power 52, a non-profit organisation that helps Baltimore residents find employment in the solar sector, he said during  Jan. 22 press conference at H. Lavity Stoutt Community College.

Now, with a memorandum of understanding signed last week, Power 52 has become the college’s sole partner for the first three years of a programme that will train Virgin Islanders to become certified solar technicians.

“In the past, new industries are explored but the people are hardly every trained,” Premier Andrew Fahie said at the press conference, though he asserted that his administration will bring change.

“The government has put you, the people, first.”

For the first cohort of solar students, programme directors will contact people who have expressed interest in such a programme at prior recruitment events, and they are also working on setting up an online interest forum through which students can apply, said HLSCC interim acting President Dr. Richard Georges.

“We are going to make sure we have as broad a sweep as we can,” Dr. Georges said in an interview.

About 20 students will participate in the first round of study, 15 of whom will be working towards a certification to install solar photovoltaic panels and five of whom will be studying to become accredited inspectors of such units, Dr. Georges said.

A start date has not been finalised, but the first run of the programme is expected to last from 12 to 15 weeks, as the schedule will be adjusted to accommodate students’ prior commitments, Dr. Georges said.

Reflecting the college’s policy of not turning away any students, instructors also want to keep the schedule flexible so as to provide additional lessons or refresher courses.

“We will work with them on an adjusted schedule … so that everyone is on the same page,” Dr. Georges said.

Programme graduates will not immediately be qualified to install solar panels in the territory, though they will have a head start on obtaining the requisite certifications to do so, according to the acting president.

Power 52 is an accredited partner of the United States-based National Center for Construction Education and Research, and as such all graduates of the HLSCC programme will be eligible to sit for the exam given by the North American Board of Certified Energy Practitioners, Dr. Georges said.

Generally, before sitting for the exam, individuals must submit an application package that includes details of projects they’ve already worked on and advanced training courses they’ve already taken, among other information, according to the NABCEP website.

Once graduates have passed this exam, they will be eligible to apply for the class E electrician licence from BVI Electricity Corporation, Dr. Georges said.

A technician must have a class E licence in order to legally install solar panels in the VI, according to the 2018 BVIEC regulations.

In a speech detailing Power 52’s mission, Baltimore native Rob Wallace, one of the organisation’s founders — who has almost a decade of experience in programme management and renewable energy systems design, according to Power 52’s website — said his work with the organisation was inspired by the tumult he witnessed in the aftermath of the 2015 riots that rocked his hometown.

Power 52 was formed in the riots’ aftermath with the goal of equipping the city’s youth with a viable means of employment, Mr. Wallace said.

“The solar is just a tool,” he said, adding, “When we start talking about respecting your elders, loving yourself, having faith and believing in yourself, then their thought process changes, and now you can retool them.”

HLSCC chose to partner with Power 52 largely because it is NABCEP and NCCER certified and has a successful track record, Dr. Georges said.

“They have a cadre of certified instructors; they’ve already been doing it for a number of years,” he explained.

In a passionate speech detailing his commitment to the Power 52 programme and how it could benefit the territory, Mr. Lewis said teaching Virgin Islanders how to install solar panels would help tap into a growing market and provide a powerful catalyst in the ongoing recovery from the 2017 hurricanes.

“This is just the beginning,” he said, adding, “Now the work begins to live.”

In 2013, government laid out a series of energy goals, including supplying 30 percent of electricity from renewable sources by 2023; decreasing fossil fuel imports 20 percent by 2021; and reducing fossil-fuel-based energy generation in Anegada by 80 percent by 2021.

However, such goals are still far off, and nearly all of the territory’s electricity is supplied from fuel-burning generators in Pockwood Pond.