The Virgin Islands financial services industry continued a downward slide in the second quarter of 2019, incorporating 6,365 new companies to turn in its worst quarter since 2003, when the …

END_OF_DOCUMENT_TOKEN_TO_BE_REPLACED 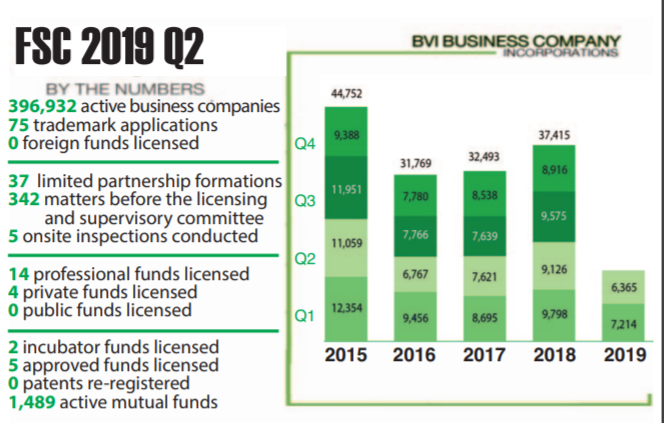 The Virgin Islands financial services industry continued a downward slide in the second quarter of 2019, incorporating 6,365 new companies to turn in its worst quarter since 2003, when the Financial Services Commission began issuing quarterly reports, and prompting concern that new legislation combined with overall global economic
woes may be affecting one of the territory’s core industries.

“The drop is likely related to… an uncertain global economy [and] uncertainty regarding economic substance,” said Robert Briant, partner and head of the corporate division at Conyers.

Mr. Briant pointed out that after the global economic crisis in 2009, the territory experienced a 23 percent overall decline in the number of companies compared to 2008.

At the time, the FSC attributed that drop both to a significant reduction in new incorporations and an increase in dissolved companies, as well as companies being struck off the register for
non-payment of annual fees.

With 849 fewer incorporations, Q2 saw an 11.6 percent decrease from Q1, which was itself already the territory’s worstever Q1 since 2003 and its second-worst quarter since then.

With 402 fewer incorporations than Q2 of 2016, this quarter took the record from the previous lowest performing quarter.

The numbers were the latest in what is shaping up to be a challenging year for financial services.

The drop in the total number of registered companies could point to uncertainty worldwide about the territory’s new Economic Substance Act.

Since Jan. 1, when the legislation took effect, the industry has been dogged by uncertainty about which companies would survive the new requirements, which call for VI-incorporated companies that are tax resident in the VI and engaged in certain activities to demonstrate “adequate substance” — a requirement that has led to much speculation as to what might count as “adequate.”

The law kept the VI off a European Union blacklist, but stakeholders warned that it could dampen business. A draft code, which provides guidance on complying with the legislation, was released in April.

Elsewhere, limited partnership registrations — one of the few rays of hope last quarter — also dipped. After shooting up to 56 in Q1, there were just 37 LPs registered in Q2, 19 fewer than the previous quarter and the same number registered in Q2 of last year. The Limited Partnership Act was enacted in December 2017 as a simpler and more flexible alternative to the territory’s incorporation rules.

Last quarter, BVI Finance CEO Elise Donovan called the law a “great success,” praising the “consistent growth” it brought about and its flexible and innovative approach.

However, LPs seem to be suffering the same fate as incorporations. Last quarter, the cumulative total of active LPs was fast approaching the 1,000 mark.

But this quarter showed not only fewer new registrations, but 144 fewer registered LPs total. Only trademarks seem to be on an upswing. With 18 additional applications, the total number of applications to register a trademark increased by 47.06 percent over Q2 of 2018, and 31.58 percent when compared to the previous quarter.

Since the enactment of the Trademarks Act of 2013, more than 900 new applications to register a trademark have been filed. With 132 applications filed already this year, 2019 seems on track to perform better than 2018, when 225 applications were filed.