With just 22,362 new companies formed, 2020 hit a 21-year low for new incorporations, despite a fourth quarter that performed slightly better than the year before, according to numbers recently …

END_OF_DOCUMENT_TOKEN_TO_BE_REPLACED 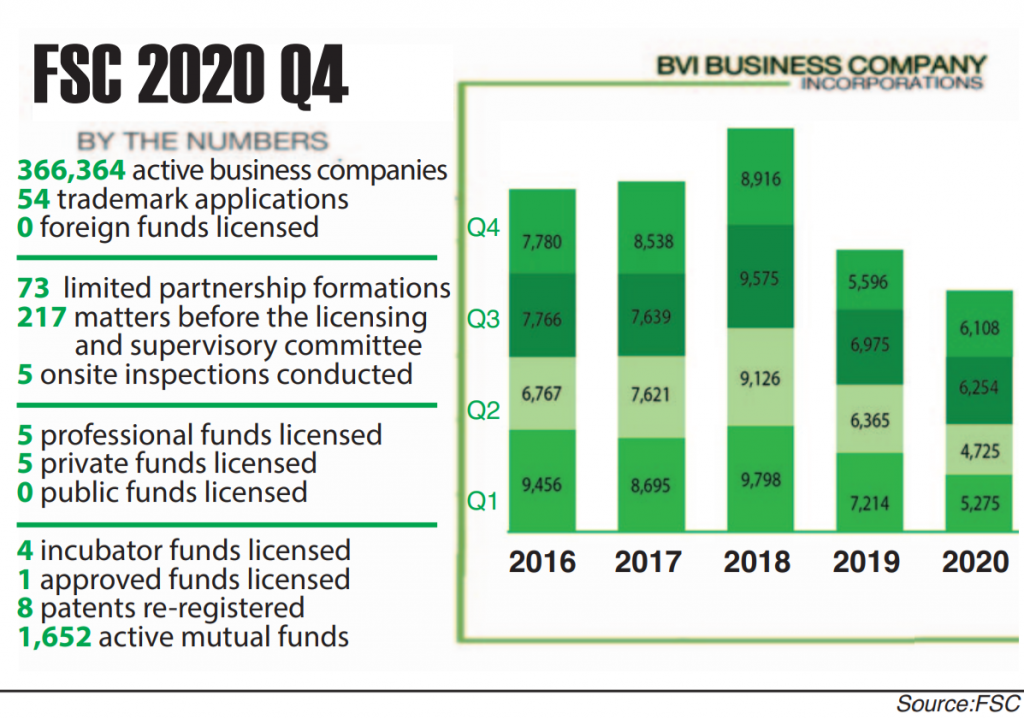 With just 22,362 new companies formed, 2020 hit a 21-year low for new incorporations, despite a fourth quarter that performed slightly better than the year before, according to numbers recently released by the Financial Services Commission.

This continued a downward slide that has seen new incorporations, total active companies and government revenue all falling even as financial services remains the pillar propping up the Virgin Islands economy amid the Covid-19 pandemic.

With 146 fewer new companies formed in the fourth quarter of 2020, new incorporations fell slightly when compared to Q3 2020, which saw a 32 percent spike after three straight falling quarters.

On other fronts, there was some positive news, with the total number of limited partnerships, which were established under legislation passed
in 2017 as a simpler and more flexible alternative to the territory’s traditional company offerings, continuing to rise steadily.

Trademarks, however, continued to lag compared to 2019. With 272 total applications for the year, 2020 trademark filings slightly outperformed 2018, when 225 applications were filed, but couldn’t match 2019, which saw 314 filings.

Furthermore, government revenue from the sector fell to just $190 million for 2020 despite a steep fee hike three years ago that boosted 2018 revenue to an all-time high of nearly $232 million, according to numbers announced in March by Premier Andrew Fahie.

Following a $5 million bump the next year, incorporation fees were raised, and industry fees contributed an all-time record of nearly $231 million to government in 2018.

Since then, the revenue has dropped, falling to about $205 million in 2019 and less than $190 million last year. It also made up a smaller percentage of the territory’s overall revenue last year, at less than 53 percent.

However, Mr. Fahie said, thankfully for a territory still struggling through a tourism slump related to the Covid-19 pandemic, 2021 so far has seen only a “modest” decrease in financial services revenue.