Speaking at a special virtual sitting to mark the commencement of the 2021 law year, Dame Janice Pereira, chief justice of the Eastern Caribbean Supreme Court, said the Covid-19 pandemic …

END_OF_DOCUMENT_TOKEN_TO_BE_REPLACED 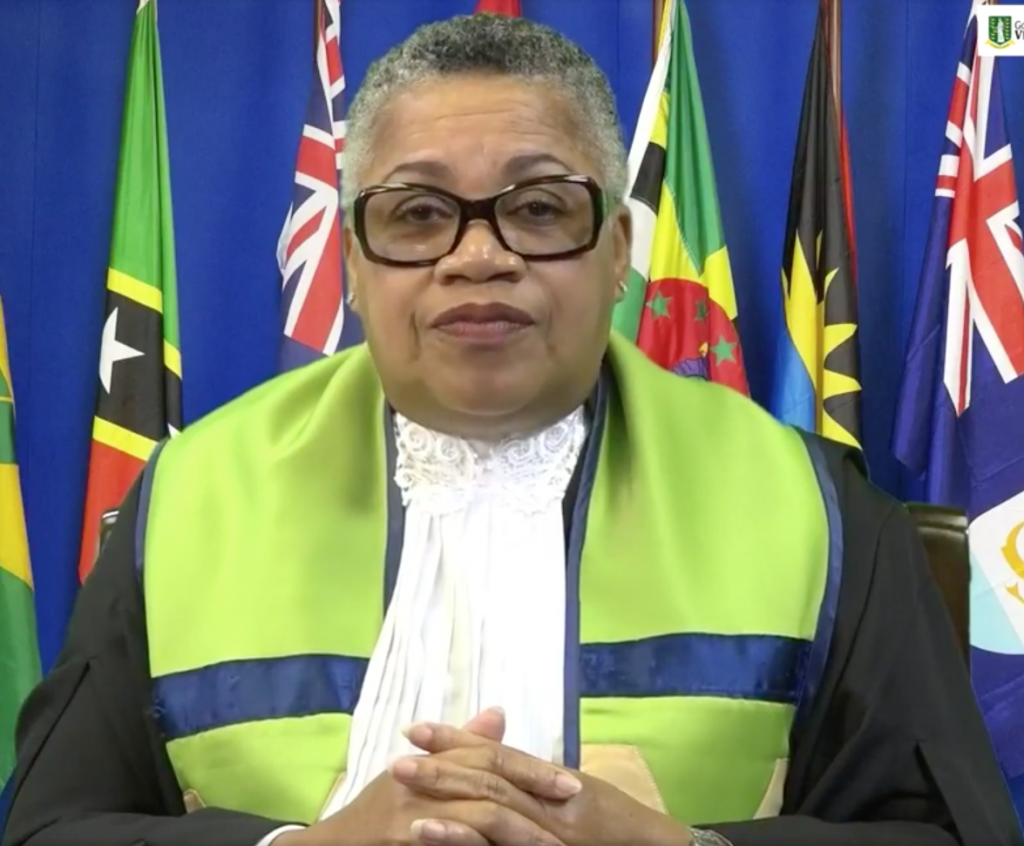 During a videotaped special sitting of the Eastern Caribbean Supreme Court held to open the new law year, Chief Justice Dame Pereira outlined how the court fared during the pandemic. (Photo: JOEY WALDINGER)

Speaking at a special virtual sitting to mark the commencement of the 2021 law year, Dame Janice Pereira, chief justice of the Eastern Caribbean Supreme Court, said the Covid-19 pandemic has hampered some of the court’s activities, including grounding jury trials in several member jurisdictions and hurting case clearance rates.

Nevertheless, she added, the court’s recent adoption of technology and other such strides helped it continue most of its operations largely uninterrupted in spite of the Covid-19 challenges.

One of the greatest impediments stemming from the pandemic was the backlog in jury trials, which were completely halted in several member states, according to the chief justice.

This was due mostly to “our inability to provide proper physical distancing protocols in many of our existing court-rooms,” Dame Janice explained.

As a solution, she proposed that governments throughout the OECS consider implementing judge-only criminal trials for certain types of cases.

Caribbean countries such as Trinidad, Belize and the Cayman Islands already hold such trials, which have helped those countries maintain efficient criminal courtrooms, Dame Janice said.

“I have no doubt that in this Covid climate, … the implementation of judge-alone criminal trials would go a long way in reducing the backlog of criminal cases in the eastern Caribbean with no impact whatsoever on the fairness of such trials,” she said.

The chief justice also noted that some member states have attempted to conduct “blended jury trials” through a mix of remote and in-person hearings.

But lacklustre judicial facilities were a persistent problem across the eastern Caribbean even before the pandemic struck, according to the chief justice.

“Covid should not have met us still in this state,” she said. “It is my fervent hope that once we have gotten past the pandemic and our economic health has improved, all steps will be taken to address this long outstanding problem.”

In the Virgin Islands, Trojan Design and Development Limited was awarded a $324,840 contract in July to design and manage the construction of a new Magistrates’ Court building as the first step of the “Halls of Justice” project, although development of such a building in the territory has been long promised.

In spite of the challenges posed by the court system’s lagging infrastructure, its continuing embrace of technology helped facilitate trials during the pandemic, Dame Janice said.

As a result, the criminal and civil courts saw less disruption than their criminal counterparts, which had not integrated as much technology into their operations, she explained.

Central to the ECSC’s technological shift is the e-litigation platform — which the VI uses — that allows legal practitioners to electronically file court documents.

Currently, all but three OECS member states — Dominica, Grenada, and St. Vincent and the Grenadines — use this electronic platform, and though Covid has slowed down the progress these countries have made in adopting the platform, Dame Janice hopes that all member states will be linked to the portal by July, she said.

“I know our practitioners in Dominica, Grenada and St. Vincent are anxiously awaiting this step,” she said.

The pandemic also prompted court officials to implement “emergency practice directions” and adopt “remote hearing protocols,” which are still in effect, according to the justice.

For some facets of the judiciary, these digital working guidelines have proven markedly successful in keeping court processes humming, Dame Janice said.

In the court of appeal, only one hearing, in March, was missed throughout 2020, she added.

The use of video-conferencing and other technologies also allowed the court’s review committees to continue working on new judicial reforms, she added.

A committee reviewing the court’s civil procedure rules has submitted its report, and is now drafting proposed amendments to the rules, according to Dame Janice.

“After another round of post-draft consultations, we are hoping their amendments will come into effect later this year,” she said.

Another committee launched last year, the code of ethics review committee, has produced a draft of a revised code, which the justice also hopes will be officiated later in the year, she said.

Additionally, the court has rolled out new sentencing guidelines for sexual, dishonesty and firearm offences “with more in the pipeline,” she added.

The court has also issued a “practice direction” for the sentencing of murder charges, which highlights the factors that judges should consider during the sentencing process, according to the justice.