One Mart has seen a busy year despite an overall struggling economy in the territory and further abroad. Following a recent reverse merger that took the business public in the …

END_OF_DOCUMENT_TOKEN_TO_BE_REPLACED 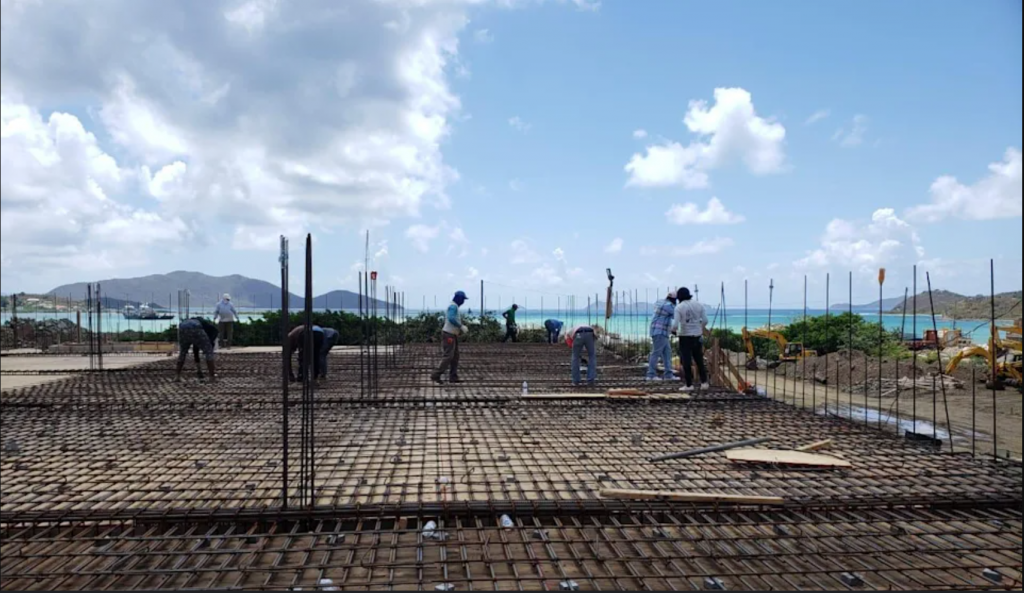 The new One Mart supermarket is under construction in Fat Hogs Bay. (File photo: PROVIDED)

One Mart has seen a busy year despite an overall struggling economy in the territory and further abroad.

Following a recent reverse merger that took the business public in the United States, the newly formed OM Holdings International Inc has begun construction on a 34,000-square-foot One Mart supermarket in Fat Hogs Bay, scheduled to be completed by the end of the year.

OMHI also has announced plans to expand to other countries and launch a mobile delivery app similar to the United Statesbased Instacart.

“OM Holdings Inc. combines the strength of a leading Caribbean retail store with a highly experienced management team, and we expect to significantly expand and grow the company over the next few years,” OMHI Chairman and CEO Mark Vanterpool, who also represents the Fourth District in the House of Assembly, said in a press release.

The East End store will be located on five acres with a 50-year lease, and it will offer the largest parking lot in the community, according to Mr. Vanterpool.

“The store will be similar to the company’s first store, but larger so it can offer even more goods, including food, clothing, appliances, furniture, electronics and general household items — everything shoppers need for one-stop shopping,” the release stated.

Currently, the Port Purcell  One Mart is the second-largest grocery store in the territory, the release noted, adding that the company also provides lumber and other construction supplies to contractors throughout the Caribbean.

Mr. Vanterpool founded One  Mart in the Virgin Islands in 1986. In a process that started last year, its holding company, KMark Foods, was acquired by the publicly held Portage Resources Inc, a Nevada-incorporated firm that first had sold off all its assets and liabilities as part of a restructuring process, according to a  May press release announcing the reverse merger.

Portage was renamed OMHI, and Mr. Vanterpool was appointed CEO and chairman.

The merger announcement touted One Mart’s history, noting that it “has been profitable for 35 years and has grown nearly every year since it was founded.”

“To date, our company has outperformed profitable industry metrics: Stores like One Mart in the USA have an average profit margin between 2.12 percent and 2.49 percent, while One Mart has yielded more than 6.6 percent,” the release read. “Even during the Covid-19 pandemic, we enjoyed a 5.5 percent profit margin.”

The company said its management team is based in the Caribbean and the United States and is made up of “professionals who have spent on average 20 years in the business and know how to build stores from first shovel to opening.”

Due to the pandemic-driven demand for contactless payments, OMHI also has announced plans to branch out to introduce a mobile delivery app.

According to the company’s US Securities and Exchange Commission filing for 2020, the app will work like ones that already exist in other countries, such as Grubhub, Uber Eats and Instacart.

“Over the next 12 months, we expect to combine contactless logistics technology with our retail business to vertically integrate a ‘local on-demand economy’ within the Caribbean and other underserved markets,” the May press release stated. “Our customers will be able to open our app on any mobile device, [and] place an order for pick-up or delivery.”

The company said it would take charge of the supply chain and manage logistics as part of efforts to lower costs in remote island nations that struggle with high costs of goods.

According to the 2020 SEC filings, Mr. Vanterpool owned 76 percent of the shares of OHMI as of last year, and James Hannah of Wellington, Florida, owned 16 percent.

The filing also stated that OHMI has partnered with Rydeum, a ride-booking app founded in Atlanta by Mark Hannah, who serves as the managing director of OMHI. According to his LinkedIn page, Mr. Hannah is a software developer and former executive at several tech firms.

This year, Rydeum partnered with Jamaica’s largest taxi union, which includes some 12,000  drivers, in order to help deliver its services.

The OMHI website states that the mobile app also serves the VI, though none of the press releases stated a date for the rollout of the app in the territory.

The filings further stated that OHMI has nine operating lease agreements for supermarket, office and parking spaces, located in the VI and Miami. Its operating lease assets total just over $23 million, according to the filings.

“With construction under way, our management team is aggressively looking for several additional sites in the Caribbean to build comparable stores,” said Mr. Vanterpool last week in the press release.

The company first announced in November that it planned to expand to the East  End area.

At the time, Mr. Vanterpool said that One Mart was also in talks to purchase a 35-acre piece of land in St. Thomas and that it plans to expand to the USVI and other countries.

“We [are] also maybe going to St. Croix,” he added. “Who knows? We’re looking at St. Martin; we [are] looking at other places.”

The start of construction in Fat Hogs Bay came on the heels of Mr. Vanterpool’s April purchase of the 42-year-old Pusser’s brand, which sells rum as well as operating restaurants, bars and clothing stores.

Charles Tobias, who founded Pusser’s in 1979 and operated it since then, said at the time that the chain, which depends heavily on tourists, had been struggling after the one-two punch from the 2017 hurricanes and the Covid19 pandemic. The sale, he added, came at the right time to save the business and the jobs of more than 100 employees.

Mr. Vanterpool said his aim at One Mart is to build large, modern stores in line with current standards.

“This is not a superette. … The first floor will be grocery and a ‘cash and carry;’ the second floor will be appliances, household items and a true department store including basic clothing, electronics, cosmetics, perfumes, toys and all of your other needs,” he said. “Then you will be able to take the elevator to the top and the third floor, where you will
have a complete showroom of the One Mart quality and exquisite furniture and accessories that we are known for.”

Prices will be the same as One Mart’s Port Purcell location, he added.

Deputy Premier Dr. Natalio Wheatley said the store, which is located in his Seventh District, will drive employment and business opportunities in the eastern part of Tortola.

The supermarket, he added, “undoubtedly will raise the stakes in the Seventh District and it will attract more investment.”