The new West End port of entry, various versions of which were proposed even before Hurricane Irma destroyed the existing structure, will be about 27,000 square feet under the latest …

END_OF_DOCUMENT_TOKEN_TO_BE_REPLACED 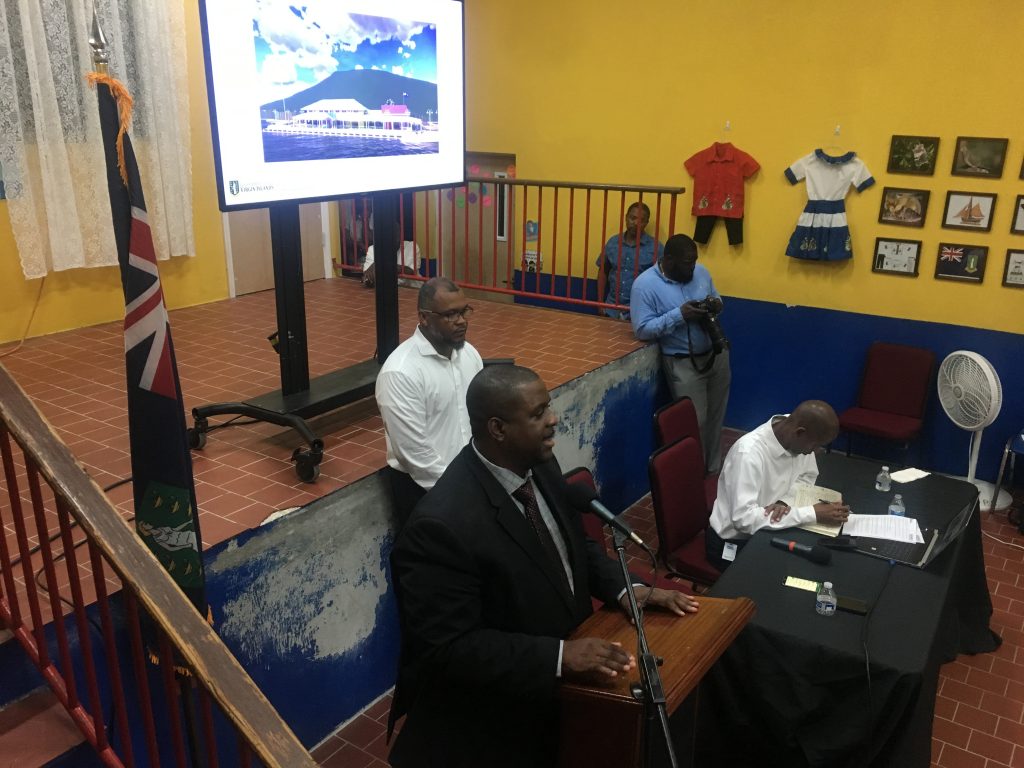 The new West End port of entry, various versions of which were proposed even before Hurricane Irma destroyed the existing structure, will be about 27,000 square feet under the latest design, according to Neil Smith, director of planning in the Recovery and Development Agency.

Mr. Smith, Premier Andrew Fahie and Brodrick Penn, chairman of the Disaster Recovery Coordinating Committee, revealed preliminary plans for the terminal at a community meeting Tuesday night at Leonora Delville Primary School, where they listened to input from a crowd of about 50 people.

The hope, they said, is that the new facility, which previously served as one of the main debarkation points for visitors from St. Thomas and St. John, will lead to a 62 percent increase in tourist arrivals to West End over pre-Irma levels.

However,Mr.Smith said that no cost or timeline for the project has been set, and the government is seeking community input before a “statement of requirement” is submitted to the RDA.

“These are just technocrats talking,” Mr. Smith said of the
plans unveiled Tuesday. “A lot of this is dependent on what the people want.”

A private donor, whom officials did not name, has proposed
covering at least 50 percent of the cost, with the rest drawn from government funds. Another option is seeking funds from Caribbean Development Bank loan, said Mr. Smith, though the private-donor option would likely be faster.

Ideally, the terminal, which is likely to be a multilevel building, would have the capacity to process at least 200 passengers per hour and two ferries at once, officials
said at the meeting.It would also include separate areas for domestic and international passengers and the ability to accommodate four safari buses,going in and out every 15 minutes.

Whatever the final plan,Mr. Smith said, “It has to uplift
the area.”

A plan proposed in 2010 under the then-Virgin Islands Party government — in which Mr. Fahie, who as First District
representative represents West End,served as minister of education and culture — called for a three-storey, 75,000-square-foot facility with cost estimates of over $40 million, including 30,000 square feet of retail space.

But after the National Democratic Party came to power in 2011, then Communications and Works Minister Mark Vanterpool, who at the time served as District Four representative, said the project would be scaled back. In 2013, he proposed plans for a facility costing just under $5 million.

On Tuesday, residents lobbed questions and comments about the size of the newly proposed facility, and whether it would have room for cargo, yacht tenders and adequate parking spaces.

Mr. Penn noted the various comments, but did not provide
many additional details, explaining that the plans are still in very early stages.

Some wondered how the terminal fit into the government’s
overall tourism strategy. Mr. Smith explained that the
when the terminal was operational it processed nearly a third of non-cruise-ship visitors to the territory.

“You can see how important West End was,” he said.

Added Mr. Penn, “We know that it’s a catalyst for processing passengers from the USVI.…We have to prepare ourselves to make sure it’s sufficient because the government is interested in seeing tourism develop on the other islands — in particular Jost Van Dyke.”

There was also discussion about whether the size of vessels or frequency of ferry service might change.

“There’s been a lot of discussion about how do we improve
scheduling. How do we get the optimum out of these vessels that are costing their operators so much money? …What optimally should be transporting persons back and forth?” Mr. Penn said.

In a February interview, Mr. Fahie told the Beacon that from a tourist perspective, he would focus on “interim measures”to get people in and out of the territory.

Current facility
The West End port has been closed to international ferry arrivals since the 2017 storms. Customs officers are clearing in private boats only, while housed in a donated temporary facility.

In early January, Mr. Vanterpool told the House of Assembly
that the BVI Ports Authority was working to reopen it to international arrivals by the end of that month, but the deadline was missed. A previous deadline of October 31, 2018 was also missed.

On Tuesday, Mr. Fahie acknowledged the inconvenience
not only to tourists, but to residents of West End and Jost Van Dyke who previously depended on the terminal for travel to St. Thomas and St. John, as well as the subpar working conditions of customs officers.

“I, as district rep, was totally annoyed, and that’s when I went to speak to the premier,”he joked. On a serious note, he added, “We deserve better.”