Shortly after the police force’s new boat arrived in the territory in June, it was damaged when officers on patrol were pushed by a strong current onto a reef, Deputy …

END_OF_DOCUMENT_TOKEN_TO_BE_REPLACED 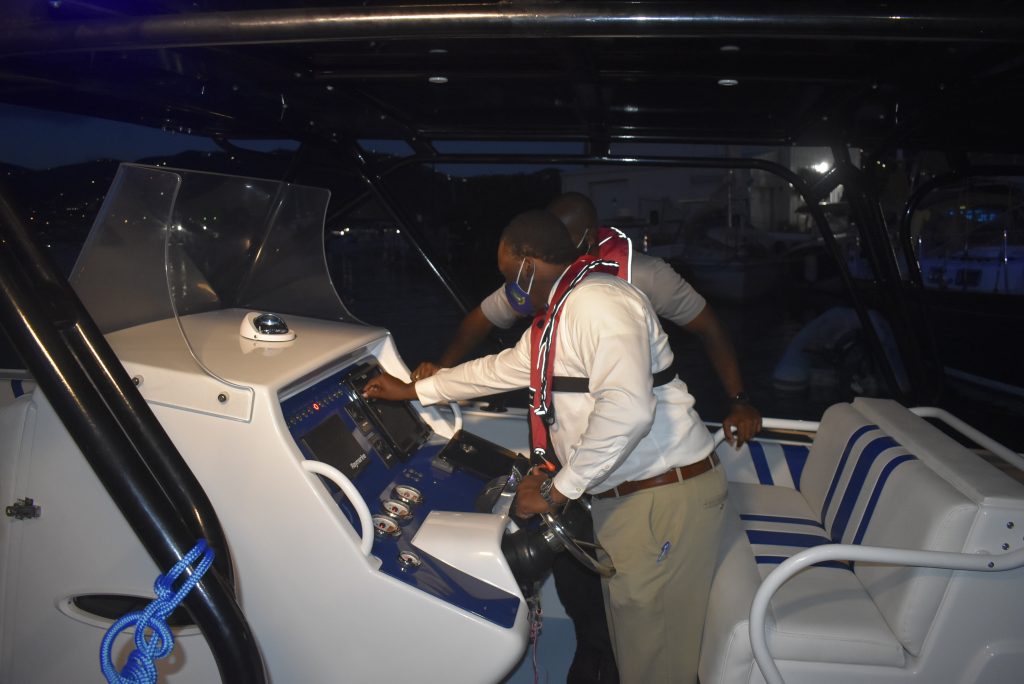 After the Midnight Justice was damaged in June, the police force’s newest addition to its marine fleet is now back up and running, Deputy Police Commissioner Alwin James said during a press conference last week. (Photo: JOEY WALDINGER)

Shortly after the police force’s new boat arrived in the territory in June, it was damaged when officers on patrol were pushed by a strong current onto a reef, Deputy Police Commissioner Alwin James said last week during a Dec. 2 press conference.

But with the subsequent repairs to the engine and the bottom of the boat now completed, Deputy Governor David Archer Jr. climbed aboard the Midnight Justice and turned on the motor, signaling the boat’s return to action.

“As we have dealt with Covid we’ve seen the importance of our security at sea,” Governor Gus Jaspert said at the press conference, adding, “It is my absolute pleasure that we have this boat ready to go.”

The boat was purchased for $500,000 under the National Security Plan with funding from the Premier’s Office, Mr. James said.

He added that the United Kingdom provided money to beef up the navigational systems on St. Ursula, another police boat, and also recently supplied the force with night vision binoculars, bulletproof vests and life vests.

Mr. James also said that six UK officers are set to arrive in the territory early next year to lead training courses and provide mentorship for marine police and officers in the Joint Border Patrol Task Force.

While Premier Andrew Fahie also expressed his pleasure at the boat’s return to the water, he said that heightened policing alone is not sufficient to keep the territory safe.

Steps also must be taken to strengthen the Virgin Islands’ social fabric, such as placing a greater emphasis on education and discipline, the premier explained.

The premier has previously opposed assistance from the UK in patrolling VI waters, including the arrival of the HMS Medway, a Royal Navy Patrol ship that seized more than $100 million worth of cocaine in the Caribbean Sea in September.

Last week’s press conference came on the heels of a historic drug bust here last month, in which 2.3 tonnes of cocaine was seized in Balsam Ghut.

Shortly thereafter, Police Constable Darren Davis was arrested and charged with three counts of possession of a controlled drug with intent to supply and keeping an unlicensed firearm before being released on bail.

On Nov. 18, United States Customs and Border Protection officials arrested four people off the coast of St. Thomas, including the alleged ringleader of a drug trafficking network who US officials claim stashed cocaine on Mr. Davis’ property.

According to documents filed in the US District Court of St. Thomas and St. John, the alleged drug smuggler, Ruben Reyes Barel, fled from Tortola to St. Thomas after officers in the territory attempted to execute a search warrant on him.