Shortly after the end of a year that saw frequent violence and a string of high-profile drug busts, Police Commissioner Mark Collins on Friday congratulated his officers for their hard …

END_OF_DOCUMENT_TOKEN_TO_BE_REPLACED 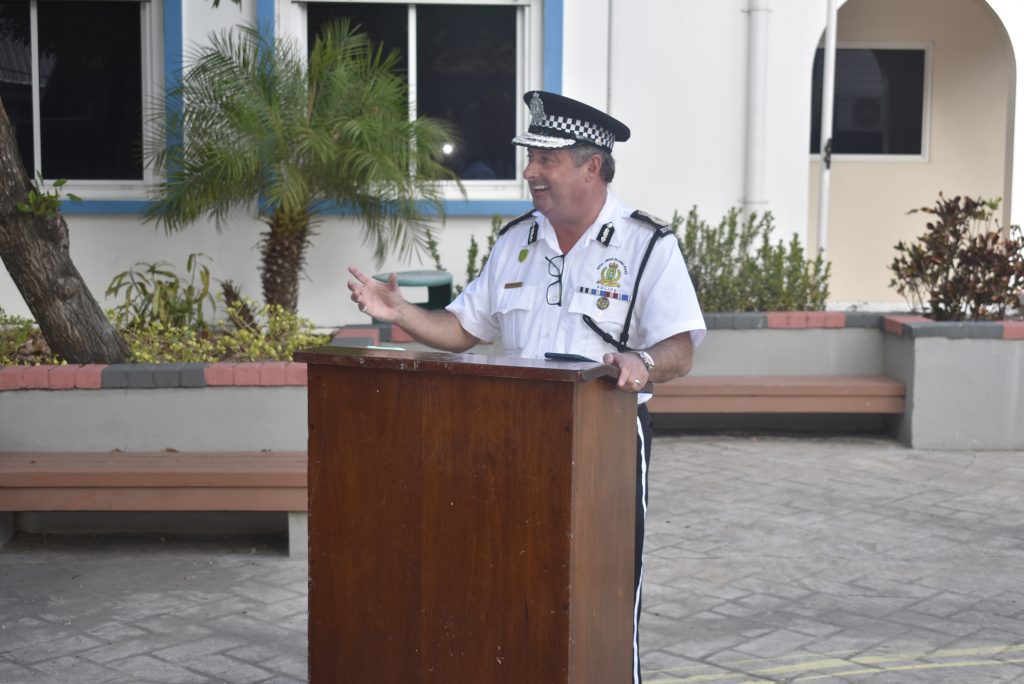 Shortly after the end of a year that saw frequent violence and a string of high-profile drug busts, Police Commissioner Mark Collins on Friday congratulated his officers for their hard work and outlined his plans for the new year.

While he acknowledged that difficulties lie ahead, especially with the already depleted police force facing further staffing constraints, he said he is looking to create new units for reviewing cold cases; offer more opportunities for officers to develop their capacity; improve surveillance across the territory; and beef up the K-9 and marine units, among other measures.

“Despite the painstaking hours and a level of commitment which would challenge most human beings, these officers have given their all, and so I am delighted to be leading this team,” Mr. Collins said during a Friday press conference in front of the Road Town Police Headquarters.

Last year, the commissioner said, police seized more than 1,800 kilograms of cocaine, which is still dwarfed by the 2,300 kilograms allegedly recovered from a property belonging to a police officer in November 2020.

Along with targeting of drug shipments, the police have also made headway into some of the territory’s recent killings, with 20 people being charged in connection to the murders of George Burrows, Matthew Daley, Catherine Pickering, Rodney Simmonds, and Nickail Chambers, Mr. Collins said.

Though the commissioner added that “significant progress” had been made on some of the other murders in recent years, no charges have been laid for the killings of Earl “Bob” Hodge, Andrew Skerritt, or Everton McMaster, who was murdered in broad daylight in front of International Motors in Fish Bay.

During his June appearance before the Commission of Inquiry, Mr. Collins said a lack of training among some police officers and a difficulty in filling open positions has hindered the force’s effectiveness.

But on Friday, he said he is working to plug holes in the police ranks and train officers to respond to different types of criminal activities.

“For instance, our recently trained counter-terrorism hostage negotiators have intervened in at least one crisis situation, which had resulted in the reduction of the number of murders recorded in 2021,” Mr. Collins claimed.

The force has also created a new team to review cold cases, which the commissioner hopes will result in additional murder charges in the new year, he said.

To address staffing shortages, Mr. Collins has secured support from Governor John Rankin and central government to increase the number of active officers by boosting local training and recruiting specialist officers from abroad, he said.

“This should help to bolster our numbers and lift the strain on those departments that are already overwhelmed,” Mr. Collins said.

The staffing woes have also been exacerbated as police officers have been interdicted from duty over the past year, while others were charged with crimes ranging from domestic assault to breach of trust in connection to the murder of Mr. Chambers, a prison inmate.

“It is … important that we appreciate that the facility of interdiction is not punitive, but [a] necessity to ensure that we are balanced, that we prevent interference in the investigation in every way and at the same time protect the reputation of the [police force],” he said.

Successive police commissioners have struggled to accomplish a longstanding goal of outfitting the territory with CCTV cameras to help track down criminals, but Mr. Collins said progress will be coming soon.

The force, he added, has installed 10 cameras across Virgin Gorda and is planning to have another 20 up and running on Tortola later this year.