As part of his duties in maintaining the Bitter End Yacht Club’s mooring fields, Ben Williams, the owner of Sunchaser Scuba, has to replace the mooring lines every five or …

END_OF_DOCUMENT_TOKEN_TO_BE_REPLACED 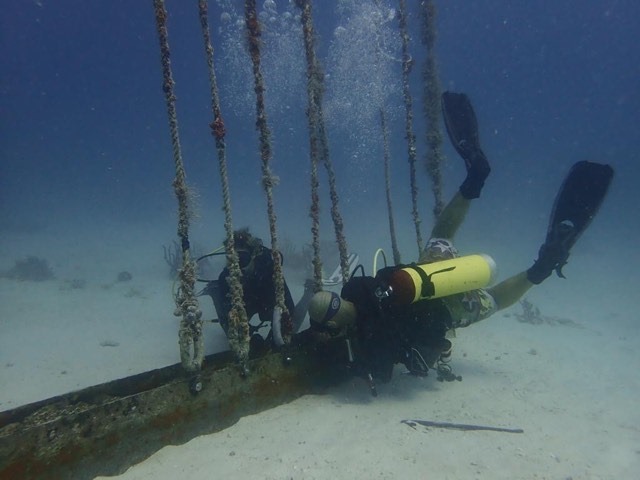 Using old mooring lines from the Bitter End Yacht Club, Ben Williams and his Sunchaser Scuba team crew made a new addition to a pre-existing dive site at The Dogs off Virgin Gorda. (Photo: PROVIDED)

As part of his duties in maintaining the Bitter End Yacht Club’s mooring fields, Ben Williams, the owner of Sunchaser Scuba, has to replace the mooring lines every five or six years, he said.

This year, instead of just discarding the thick ropes, which have been overtaken by coral and sponges, Mr. Williams and his Sunchaser team decided to transform them into a new dive site, screwing them into the sand off Virgin Gorda and fashioning them into a set of vertical columns and a coral-covered archway through which divers can swim.

“We came up with the idea of ‘How can we recycle what we already have … to promote the BVI as a diving destination?’” Mr. Williams said.

With the goal of increasing the Virgin Islands’ diving prestige, Mr. Williams and his crew constructed this arrangement near where, in December, Commercial Dive Services sank three aluminium model planes that have been painted and moulded to resemble sharks.

“We decided to place them in the vicinity [of the shark-planes] and expand this dive site specifically,” Mr. Williams said, adding, “It just adds another element to the dive site.”

After switching out the mooring lines for new ones last summer, the Sunchaser team embarked on their project in December.

First, the crew had to send divers down to unshackle the lines from the sandy bottom where they had been resting for five months, and pull them up onto a boat to be transported to the site.

On the boat, the crew stuffed the lines into five 55-gallon drums filled with saltwater, into which they pumped compressed air every five minutes during the journey from North Sound to Great Dog, preserving the soft coral and sponges that have made their homes on the mooring lines, Mr. Williams said.

At The Dogs, the crew then fastened the lines to a metal beam that CDS had inserted into the ground while sinking the “Sharkplaneos,” Mr. Williams said.

The Sunchaser crew worked periodically on this project from winter through spring, repeating this process while still maintaining a full schedule of dive lessons and tours, Mr. Williams said.

By the time they finished at the end of April, they had transported and secured 52 recycled down lines stretching a total of 2,178 feet, some of which were so long they bent underwater, which inspired the arching design.

While working on the site, Mr. Williams, who readily admits to not being artistically gifted, was worried that the columns and archway would resemble “a bunch of lines and trash.”

But once all was said and done, “It was a huge relief that it actually looked like a structure,” he said, adding, “With the planes as well it looks really unique.”

Because the mooring lines had already attracted so much coral before being moved to The Dogs, fish and other life quickly swarmed the lines once they were fastened into place, Mr. Williams said.

“What blew us away really was the amount of marine life that reacted to it so quickly,” he said, adding, “The amount of schooling fish you get up in the shallows is fantastic.”

This new site is an especially valued addition to the North Sound, where a dearth of places for dive enthusiasts to explore and dive instructors to teach is further limited when a northern swell, comes in, said Chris Juredin, owner of CDS.