Last week, government began rolling out several initiatives under the “second phase” of its Economic Response Plan to Covid-19, but questions remain about whether the package is helping people in …

END_OF_DOCUMENT_TOKEN_TO_BE_REPLACED 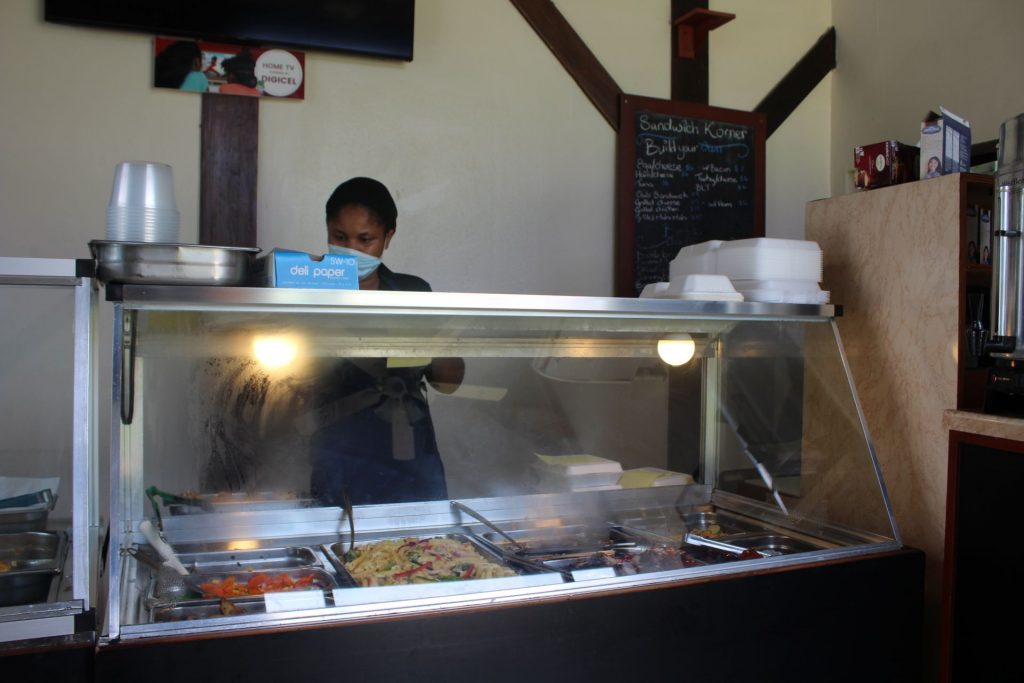 Last week, government began rolling out several initiatives under the “second phase” of its Economic Response Plan to Covid-19, but questions remain about whether the package is helping people in the capacity that they need. (Photo: ZARRIN TASNIM AHMED)

Last week, government began rolling out several initiatives under the “second phase” of its Economic Response Plan to Covid-19, but questions remain about whether the package is helping people in the capacity that they need.

Though she’s heard no complaints from employees applying for the new $10 million Unemployment Relief Fund, she said, a cap on the amnesty for electricity payments is hindering some businesses from benefiting as much as they would have liked.

“We find that they’re very low considering what the average business would have to expend,” she said. “One person that spoke to me, their bill was about $600 a month. She has refrigerators and her air conditioning is on 24 hours a day. I would say the average business bill is anywhere between $200 to $300 a month, but that all depends on different factors.”

Eligible businesses were granted up to $150 off their bill per month for up to three months, and individuals were granted up to $80. Ms. Smith said the BVICCHA recommended 100 percent amnesty for 90 days, especially given the difficulties business owners had to go through just to file.

“A short timeline was given,” she explained. “You had to submit by [June 15], and the supporting documents that you needed, you may not be able to get in that timeframe.”

One BVICCHA member, she said, was asked to bring a certificate of good standing from the Inland Revenue Department, which often takes more than a week to procure.

“It’s going to be discouraging to owners to go through all of this only to get $150. You have to take time and pay for all this,” she added. “It would’ve been more worthwhile if it was full amnesty.”

Soon, other funding will be available to businesses from a $6.5 million portion of a $40 million Social Security Board grant, officials said in a May 28 announcement.

Applications open on June 15, and Ms. Smith said she expects the tourism sector will be looking for assistance the most.

As residents apply for benefits under the $10 million Unemployment Relief Fund, more details about that programme have been released as well.

For each applicant, the benefit “will be calculated at a rate of 50 percent of insurable earnings up to a maximum of $1,000 and a minimum of $500 a month,” government announced on June 3.

Applicants must have paid at least 13 out of 20 weeks of SSB contributions before March 30, 2020; be financially impacted by Covid-19; and be actively seeking employment.

The application does not have any forms for landlords to fill out, nor does it ask applicants to list the amount of their rent. There is a section that must be completed by previous employers to verify previous employment, but the forms must be submitted by the employee.

On Friday, Premier Andrew Fahie also announced that vendors at the Cyril B. Romney Tortola Pier Park, which has been closed to cruise ships since March 14, would receive rent concessions.

The Tortola Pier Park Limited board offered free rent to eligible tenants for the month of April, and 75 percent reduced rent for May and June, the premier said, though he did not state eligibility requirements.

Meanwhile, the board also said it was approved to issue $529,974 in dividends to the Pier Park’s 94 shareholders.

He thanked CEO Vance Lewis, while acknowledging “a number of cost-saving initiatives” the TPPL has undertaken.

“The business operating environment has changed, not just in the BVI, but throughout the world. Everywhere, business operators are looking at their supply chains — the inbound logistics and the outbound logistics,” Mr. Fahie said. “They are looking for new marketing strategies, new approaches to customer service and service delivery. They are looking for ways to boost their trade volumes back to the levels that will render them viable and sustainable.”

Also on Friday, applications reopened for a $2 million fishing and farming initiative.

Physical copies of application forms can be picked up at the Social Security Board office.

Each application must be submitted with proof of status; estimate of materials, works to be done or equipment required with photos were possible; a copy of trade licence or fishing licence or a notarised letter verifying fishing and farming engagement for the past three years.

Forms must be submitted to the Premier’s Office in the Ralph T. O’Neal Administration Complex or emailed to premieroffice@gov.vg. All forms must be completed and submitted by July 3.

https://bvielectricity.com/amnesty-programme/
Physical copies of application forms can be picked up at the BVI Electricity Corporation offices on Tortola, Virgin Gorda, Anegada and Jost Van Dyke.

Forms can be submitted to the offices, or emailed to amnesty@bvielectricity.com. All forms and supporting documents must be completed by June 15.