After a February fire shuttered the Pockwood Pond incinerator and again thrust the territory’s waste management problems into the spotlight, government and Recovery and Development Agency officials hosted a meeting …

END_OF_DOCUMENT_TOKEN_TO_BE_REPLACED 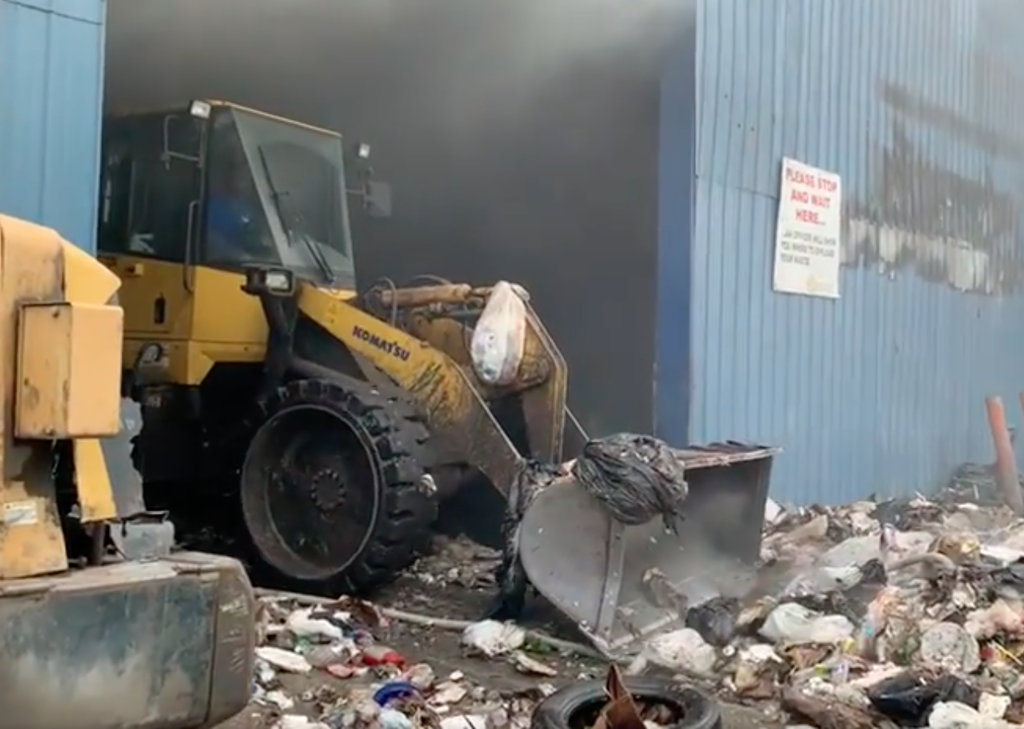 During an April 13 meeting devoted to improving the territory’s waste management system after the Pockwood Pond incinerator again closed following a fire in February, Recovery and Development Agency officials explained various proposals to better handle the Virgin Islands’ garbage. Above, a bull-dozer removes rubble from the incinerator after the February fire. (File Photo: PROVIDED)

After a February fire shuttered the Pockwood Pond incinerator and again thrust the territory’s waste management problems into the spotlight, government and Recovery and Development Agency officials hosted a meeting at Maria’s by the Sea last week to gather feedback on plans to help the Virgin Islands better process its trash.

Emphasising that no decisions have been finalised yet, officials including Health and Social Development Minister Carvin Malone and RDA Director of Programme Strategy Dr. Neil Smith laid out the immediate and long-term strategies under consideration, while also reiterating calls for residents to take greater responsibility for how they dispose of their waste.

“This cannot be a situation where we just use a Band-Aid,” Dr. Smith said, adding, “This has to be something fundamental: fundamental changes to the way that we deal with waste management.”

Though Dr. Smith and other officials vowed to increase education and recycling programmes as part of these fundamental changes, most of the proposals discussed at the meeting focused on better storing and treating the territory’s waste.

The ideas largely stemmed from an 18-month consulting contract that the government signed with the United Kingdom company John Wood Group PLC — commonly known as Wood — last August to study the feasibility of creating a “sustainable and modern landfill,” government announced at the time.

Residents can still view a video of the meeting on the government’s Facebook page, and they can provide feedback that will be considered during the decision-making process, government announced Sunday.

During the April 13 meeting, neither Mr. Malone nor Dr. Smith said how much the proposals would cost, and neither could be reached for comment by press time yesterday.

None of the Wood consultants spoke at the meeting.

Mr. Malone, however, repeated a possible “emergency” solution he had previously floated during a radio appearance shortly after the February incinerator fire: a plan to purchase mobile incinerators to be placed on Tortola, Virgin Gorda, and Anegada.

One of the proposed long-term solutions would require businesses to recycle, a requirement that Dr. Smith said should take immediate effect as virtually all businesses are already capable of doing so.

A similar requirement for individual citizens, however, would be more complex, and he said it would likely take about six months for government and Department of Waste Management officials to draft an appropriate strategy.

Although neither Dr. Smith nor Mr. Malone explained how the recycling requirement would be enforced, Dr. Smith added, “That needs to be done now.”

Another proposed overhaul would be a decision to only use the Pockwood Pond site as “a treatment location for tertiary waste,” and to prohibit garbage from being stored there, Dr. Smith said.

A separate proposal, however, would take the territory’s waste management in a different direction: Dr. Smith also put forward the option of considering Pockwood Pond, Cox Heath, and Paraquita Bay as sites for storing treated waste.

A third proposal would achieve “100 percent redundancy” at the Pockwood Pond facility, “meaning that it should have double the capacity that has been calculated for it to use,” Dr. Smith said.

He added, “We believe that facility should be running 24 hours a day, seven days a week if possible.”

This goal could be achieved by two incinerators operating side-by-side, so that workers could run one while maintaining the other, Dr. Smith said.

Lastly, there is the possibility to “look for reclamation sites and create a space that is managed … and we just dump tertiary level treated waste in those sites and reclaim some areas around the territory,” Dr. Smith said, adding that Bermuda has adopted a similar practice.

After attending the April 13 meeting, Green VI Deputy Director Sarah Penney said Tuesday that the February incinerator fire presented a valuable opportunity to ramp up the territory’s recycling and ease its reliance on incinerators and landfills.

While she praised Dr. Smith for acknowledging that roughly 64 percent of the territory’s waste could be recycled, she thought it was disappointing that the conference focused mostly on the Wood group’s recommendations for “tertiary treatment,” which she defined as anything that can’t be recycled or reused.

“It would be great if as much

energy and resource was spent on figuring out what the national scale system for recycling needs to be,” Ms. Penney said.

Behind the scenes, Green VI has been working with government to increase the amount of trash diverted from the landfill to recycling centres across the territory, she said.

By mid-2023, Green VI hopes to hand over operations of its “We Recycle Centres” on Tortola, Virgin Gorda, and Anegada to government, leaving Green VI to focus more on education, which government and RDA officials agreed at the April 13 meeting should play a bigger role in the VI’s waste management strategy.

According to Ms. Penney, Green VI and government have been working on an “internal document” that aims to increase the territory’s recycling, largely by focusing more efforts on outreach and education.

But the organisation’s hopes hinge on sufficient funding, most of which is slated to come from the promised Plastic Litter and Waste Container Deposit Act, which Governor John Rankin said during his January Speech from the Throne will “establish a recycling fund for the collection and disbursement of the proceeds of a levy on prescribed items,” while also prohibiting some plastic items.

In a Tuesday email, Ministry of Health and Social Development acting Assistant Secretary Jocelyn Estridge wrote that the bill is still in the drafting stage at the Attorney General’s Chambers, and has not yet been introduced to the House of Assembly.

Ms. Penney said Tuesday that she was happy that the AG has brought in a drafter specifically for the bill, though she stressed the need for collaboration between entities including the Department of Waste Management, the Ministry of Finance, the Customs Department, the accountant general and the business community even after the law is drafted.

Ms. Penney added that questions remain regarding the budgeting of government’s recycling partnership with Green VI, and while she did not downplay the obstacles ahead, she said now is a perfect time to pursue such substantive change.

Recalling a conversation with the owner of a VI recycling company, Ms. Penney said, “When things are their hardest, … that’s when innovation comes to the surface.”

Other residents also spoke at the April 13 meeting, which about a dozen people attended.

One attendee asked if the ministry was concerned about the low turnout, while another wondered if the proposed site at Paraquita Bay would affect farmers in the area.