In 2013 the government adopted a comprehensive strategy to overhaul the territory’s waste management system from the ground up. Most of its plans were not accomplished, but now leaders are …

END_OF_DOCUMENT_TOKEN_TO_BE_REPLACED 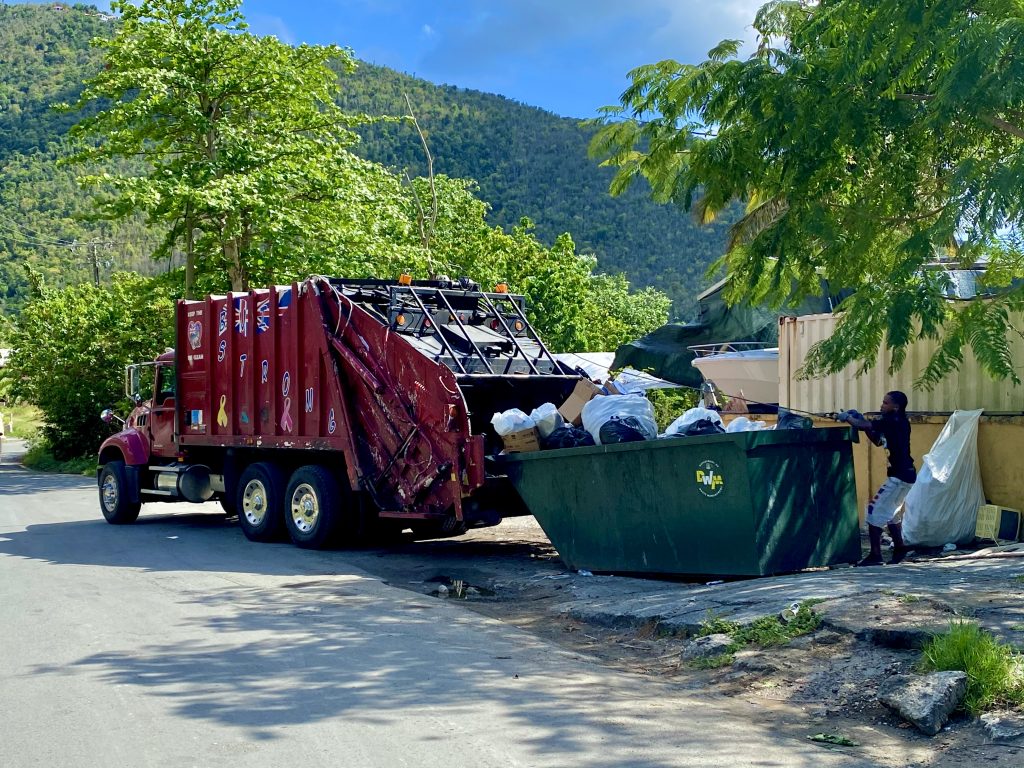 Government is currently seeking input on a draft National Waste Management Strategy, which recommends increasing home trash pickup and reducing the number of communal bins like the one pictured above in Cane Garden Bay, among many other measures. (Photo: DANA KAMPA)

In 2013 the government adopted a comprehensive strategy to overhaul the territory’s waste management system from the ground up. Most of its plans were not accomplished, but now leaders are hosting public consultations on a new draft strategy that includes many of the same goals — while also incorporating lessons from hurricanes Irma and Maria.

Neville Allen, the director of the Department of Waste Management, said the implementation of the new policy should be an urgent priority.

“We can’t keep up with the amount of garbage that’s coming in,” he said during an April 28 virtual panel discussion that kicked off the consultations. “It seems every ten years we’ll have to invest in a new incinerator.”

Much of the draft National Waste Management Strategy is now public — though some sections have not been released (see end of article) — and government plans to continue hosting consultations and accepting input through the end of June.

Like the 2013 plan, the new strategy recommends establishing the DWM as a statutory body; developing solar-powered recovery facilities to sort waste; implementing composting systems for organics; and helping fund the efforts with fees designed to encourage sustainability, among many other measures.

Charlotte McDevitt, executive director of the non-profit Green VI, told the Beacon on Tuesday that a sound waste management plan is essential for any country in the world.

“There’ve been numerous strategies developed, but nothing has gone through a formal development,” she said. “We see our role as being catalysts.”

She added that she thinks the newly proposed strategy is fair, and that materials management — which includes shipping cars, vessels and electronics out of the territory — would account for 60 to 80 percent of the territory’s waste. The remainder, which the plan refers to as “residues,” would need to go into the incinerator or landfills.

The full cost of the new strategy is not stated, but the consultants who drafted the 2013 version estimated that their recommendations would have cost some $19.8 million over the course of six years — a price tag they said would be offset by about 21 percent because of reduced use of the incinerator.

During the panel discussion last week, Health and Social Development Minister Carvin Malone said the public consultations on the new plan had been delayed for a year and a half due to the pandemic.

In 2018, he explained, the Swiss firm Agency for Resilience, Empowerment and Development was contracted to draft the strategy, which was completed in 2019.

“There have been public consultations scheduled since last February,” he added.

Mr. Malone said that waste management is “critical to healthy environments” and that the territory desperately needs “more effective ways to collect and process” waste. 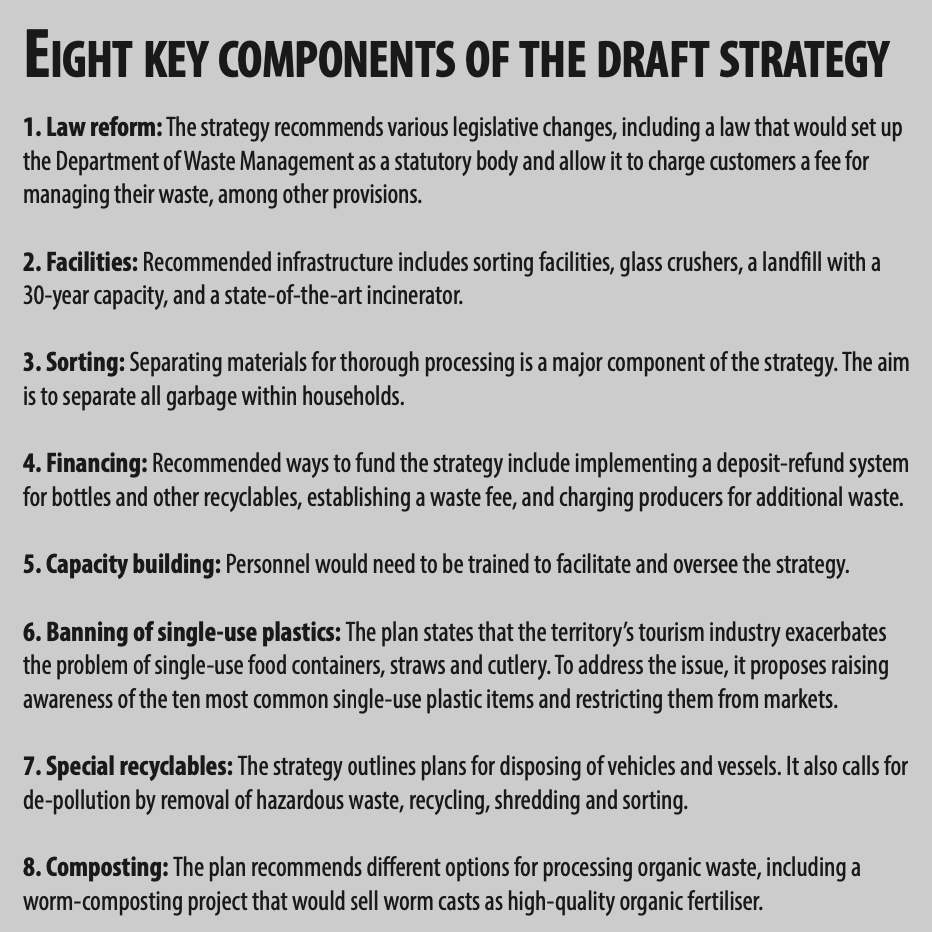 Also during the panel discussion, Noni Georges, a Virgin Islands lawyer who helped draft the strategy, outlined the “seven Rs” upon which she said the public policy is based: Rethink, reform, restrict, reduce, recycle, reuse and return. She explained each step in detail.

The first step, “rethink,” focuses on “the way we look at how waste is generated and treated” and falls under one of the United Nations Sustainable Development Goals, Ms. Georges said.

“The world is moving away from linear economies towards a circular economy,” she explained. “Instead of ‘buy, use and dispose,’ the concept is to close the loop to ‘reduce, reuse and recycle’ resources. We need to close the loop and make sure these materials go back into the economic system.”

The “Materials Management Plan” posted online outlines how source separation will be “legally enshrined,” she added.

The next step, “reform,” would begin with legislation, she explained. The policy proposes setting up the DWM as a statutory body as well as requiring licences for waste haulers “to ensure quality of service and accountability,” according to Ms. Georges.

“We’re reforming everything, basically,” she said.

“Restrict” would prohibit certain items from coming into the territory, including plastics and Styrofoam.

In November 2018, government banned food and drink containers made of non-compostable plastics, as well as non-biodegradable single-use plastic bags. Eco-friendly alternatives to such products were exempted from import duties for five years.

The next step, “reduce,” would focus on reducing and replacing disposable items with reusable ones, Ms. Georges explained.

“Businesses have started reusing plastic and turning it to other material,” she said. “Some make them into plastic bags or polywood.”

Recycling, another component of the NWMS, aims to re-make items into the same items in the territory. Materials like glass and aluminium would be “good examples,” she said.

The final “R,” “return,” refers to the collection of materials to be shipped off island and then returned to the territory as a recycled product, Ms. Georges explained.

The goal, she added, is for the territory to be “clean and beautiful.”

Other long-term goals, she said, are to implement as much door-to-door collection as possible, erect bins for bulk waste where needed, and decrease the use of communal bins for household trash.

Mr. Malone also explained some of the challenges the territory has faced in waste management.

“From the time we moved to a tourism destination, we’ve seen an upsurge of waste,” he said. “We’ve moved the dumpsite four times. It’s unsustainable. We have to find modern ways. Everyone wants to have it disposed of properly, but ‘not in my backyard.’”

Also during the panel discussion, members of the public were encouraged to call in and ask questions about the strategy. Some callers asked about the involvement of recycling partners like Green VI and private companies. Officials responded that the DWM is working closely with such partners.

Mr. Malone also addressed the issue of waste last Thursday in the House of Assembly, listing various efforts that have been ongoing.

“Since the Covid-19 lockdown, the We Recycle Programme, with funding from the Department of Waste Management and in partnership with Green VI, increased the number of recycling collection points to 46 territory-wide,” he said. “Since November 2020, 2.2 million plastic water bottles have been diverted from Pockwood Pond.”

He added that the Ministry of Health and Social Development exported more than 1,800 derelict vehicles to Colombia in February, and that efforts to “aggressively tag and collect remaining derelict vehicles” on all the major islands are underway.

In his speech, Mr. Malone also said that the incinerator is “functional and back online.”

“This is expected to alleviate the burden of frequent spontaneous open fires, but much work remains to be done to ensure that the emissions are not a nuisance and health hazard,” he said. “The illusive [pollution-control] scrubber must and will be delivered and installed. The ministry continues to pursue this scrubber without risking the loss of the country’s resources.”

He added that the government has “re-opened dialogue with the manufacturer on the delivery and installation of the scrubber.”