New Yorker rowed from Africa to the VI (VIDEO)

It’s been 3,000 miles and half a year since Victor Mooney set off from the Canary Islands in a custom-built rowboat, his sights set on the Virgin Islands, with the …

END_OF_DOCUMENT_TOKEN_TO_BE_REPLACED 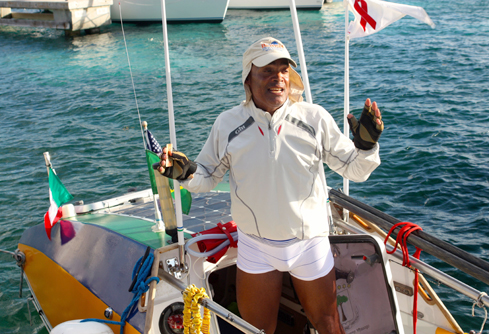 Victor Mooney, who recently rowed across the Atlantic Ocean to raise awareness about HIV and AIDS, explains some of the features of his 24-foot boat. Photo: CHRYSTALL KANYUCK

It’s been 3,000 miles and half a year since Victor Mooney set off from the Canary Islands in a custom-built rowboat, his sights set on the Virgin Islands, with the goal of encouraging people to get tested for HIV/AIDS.

“It was a lot of work, and it has not been easy,” Mr. Mooney said this week at Scrub Island, where he is resupplying his boat and resting. When he was towed in to St. Martin at the end of June, he’d lost 80 pounds and a wheel from his rowing seat, and he had a cracked oar.

Even after his pit stop in St. Martin, arriving in the VI was “like a dream,” Mr. Mooney said.

It must have seemed especially dream-like after a journey that included 10-hour days of rowing, a lengthy fast, a shark biting a hole in his boat, and a close call with a tropical storm.

For Mr. Mooney, advocating for HIV/AIDS patients and encouraging everyone to get tested comes from a personal connection to the disease, which killed his brother in 1983.

“Back then the stories about AIDS were everywhere, and the stigma was just terrible,” he said, adding that despite better treatment options and tests that can be completed in as little as 20 minutes, he believes the stigma attached to HIV/AIDS is as strong now.

When Mr. Mooney, now 48, began his advocacy work, he was doing short rows near his New York home.

“But it wasn’t enough. I knew I had to do something bigger,” he said.