Inquiry > No charges after $264,000 went missing from Customs Department due to suspected fraud

No charges after $264,000 went missing from Customs Department due to suspected fraud

In 2015, the Internal Audit Department discovered that someone had presented receipts for cash payments of almost $265,000 to the Customs Department for importing fuel at Port Purcell, but this …

END_OF_DOCUMENT_TOKEN_TO_BE_REPLACED 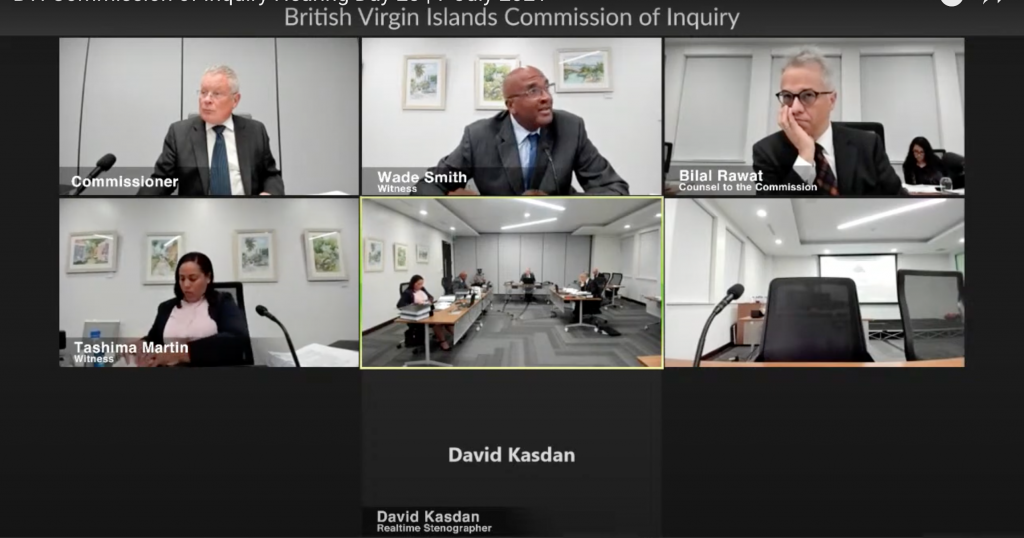 In 2015, the Internal Audit Department found that the Customs Department almost $265,000 to a suspected fraud. On July 7, Customs Commissioner Wade Smith told the Commission of Inquiry that the director of public prosecutions at the time felt the evidence was too weak to prepare a case, and that a follow-up investigation by his staff was destroyed by Hurricane Irma almost two years later. (Screenshot: COI)

In 2015, the Internal Audit Department discovered that someone had presented receipts for cash payments of almost $265,000 to the Customs Department for importing fuel at Port Purcell, but this money never made it into the government’s coffers, Commission of Inquiry Counsel Bilal Rawat said while reading from the IAD’s report during a July 7 hearing.

Though the IAD concluded that the money was lost as a result of likely fraud within the Customs Department, no one was ever charged or otherwise disciplined in the matter, according to Mr. Rawat.

The topic was a key part of the COI’s July 6 and 7 hearings, during which IAD Director Dorea Corea, Customs Commissioner Wade Smith, and Assistant Customs Commissioner Tashima Martin answered questions about the alleged fraud and other issues that have ​​ handicapped Customs’ ability to collect revenue.

During the July 6 hearing, Mr. Rawat asked Ms. Corea to explain how her team conducted the audit and what was found.

But first, he read from a summary of her report, noting that in November 2015, the Ministry of Finance alerted the IAD to the fraud allegation, and the department subsequently launched its investigation.

The department found that a customer had presented receipts totaling $264,885.33, but “no revenue in the amounts detailed on the customer’s receipts had, in fact, been deposited,” Mr. Rawat read.

But that cheque book had been issued to officers working at a different location than where the transaction was purported to have taken place, he read.

Ms. Corea explained during her testimony that when the Customs Department’s JD Edwards accounting software crashes, officers use Treasury Department-issued cheque books to write receipts for customers just as they would electronic ones.

She added that during a software crash, customs officers would also log all of their revenue at the end of the day into a “cash book,” and this cash book would then be taken to the Treasury Department along with their cheque books “for reconciliation.”

However, the report states that an electronic version of the Treasury’s cheque books from 2011 through 2015 did not contain any signatures as to who received them, nor did it mention the payment method used by the customer, Mr. Rawat read.

The Ministry of Finance later told the auditors that “the method of payment used was cash,” Mr. Rawat said.

When Mr. Rawat asked Ms. Corea if any further actions had been taken, she said nothing immediately came to her mind, and she asked to look through the documents before answering.

After taking a few minutes to read silently, Ms. Corea said, “I don’t see any further action taken on our behalf on this matter, other than what is said in the conclusion.”

Earlier on July 6, Ms. Corea explained to the COI that she has no means of enforcing her agency’s recommendations.

Mr. Smith told the COI that the fraud allegations were first raised by customs officers.

They gave a report of their findings to the financial secretary, who in turn directed the IAD to dig deeper, he said.

Mr. Smith acknowledged that no disciplinary action was taken after the IAD’s report was sent to Customs, and that the manual writing of receipts, which the auditors believe enabled the alleged fraud, is still practised by some customs officers to this day.

However, Customs has since taken some other measures to prevent potential fraud within the department, he said.

As part of their report, the auditors recommended “that the matter be submitted to the competent and appropriate authority for further investigation,” Mr. Rawat read.

Mr. Smith said that he had passed the report along to the police force.

But after conducting their own investigation, the police said that the director of public prosecutions concluded that there wasn’t enough evidence to prosecute, according to Mr. Smith.

Mr. Rawat also pressed the commissioner on why he hadn’t looked into the matter sooner and why he limited the review to six months, given that he wrote the financial secretary in October 2015 and admitted that for several years “there have been some assumptions and allegations that the government of the Virgin Islands is losing revenue through fuel imports.”

Mr. Smith told Mr. Rawat,“It’s assumed or alleged that it may have taken place over a couple of years, commissioner …. It’s nothing proven at the time.”

The COI counsel also asked Mr. Smith about the practices governing the distribution of cheque books to customs officers in the event of a software failure.

Mr. Smith explained, “The distribution of receipt books were done primarily at the headquarters.”

At each station or unit where one of the books was distributed, he added, someone would have to sign in a register showing that they had received the books, he said.

In 2015, the receipt books were assigned to senior officers in charge of various units, Mr. Smith said.

Asked whether the officers to whom the receipt books were assigned were allowed to share them, Mr. Smith replied, “That’s not a practice that is … advised, but, in the event that the [senior officer] is not present, he will have the officer in charge of the station at that time utilise the receipt book. It’s usually the second in command.”

Mr. Rawat then asked Mr. Smith if the receipt books are still being used by customs officers.

Mr. Smith said that while they are not used often, they are available in the case of an emergency.

Mr. Smith replied, “It’s not exactly the same as 2015, but it’s similar. Receipt books are issued to officers to use.”

Mr. Rawat also questioned the commissioner about Ms. Corea’s assertion the previous day that paying such a large sum in cash should have “raised red flags.”

“I believe that if there is an amount paid over three or $5,000, a supervisor must be notified,” Mr. Smith said.

Mr. Rawat also asked Ms. Martin, the assistant customs commissioner, what safeguards had been enacted since 2015 to ensure that revenue would not be lost in such a manner.

One control would be the “change in policy as it relates to the management of the manual receipt books,” Ms. Martin said, without explaining how the policy had changed.

But as the Customs Department has for years operated with “limited human resources,” Mr. Rawat asked Mr. Smith how his department is able to conduct these frequent audits given the staffing constraints.

Mr. Smith replied, “We do frequent audits. We regularly go through the JD Edwards System to make sure that revenues are being collected. We communicate regularly witht he seniors at each station,” Mr. Smith said.

Additionally, senior officers at each station have to prepare reports “explaining what has taken place at each station … in terms of revenue collection, issuance of commercial licences, crews and permits, other revenue heads that the department is responsible for,” Mr. Smith said.

Before finishing with his questions about the 2015 report, Mr. Rawat asked the customs commissioner about the auditors’ suggestion that other criminal activities may have been underway in his department.

Mr. Rawat asked if Customs conducted any investigations into whether such illicit activities were taking place.

Mr. Smith then explained that he had been dissatisfied with the DPP’s decision not to pursue the matter of the missing cash, as he felt there was enough evidence to lay charges.