Business > No food shortages due to Hurricane Dorian

No food shortages due to Hurricane Dorian

Despite the Tuesday closure of a major Florida port and Tropical Shipping’s temporary suspension of sailings due to Hurricane Dorian, the average Virgin Islands consumer needn’t worry, according to Chris …

END_OF_DOCUMENT_TOKEN_TO_BE_REPLACED 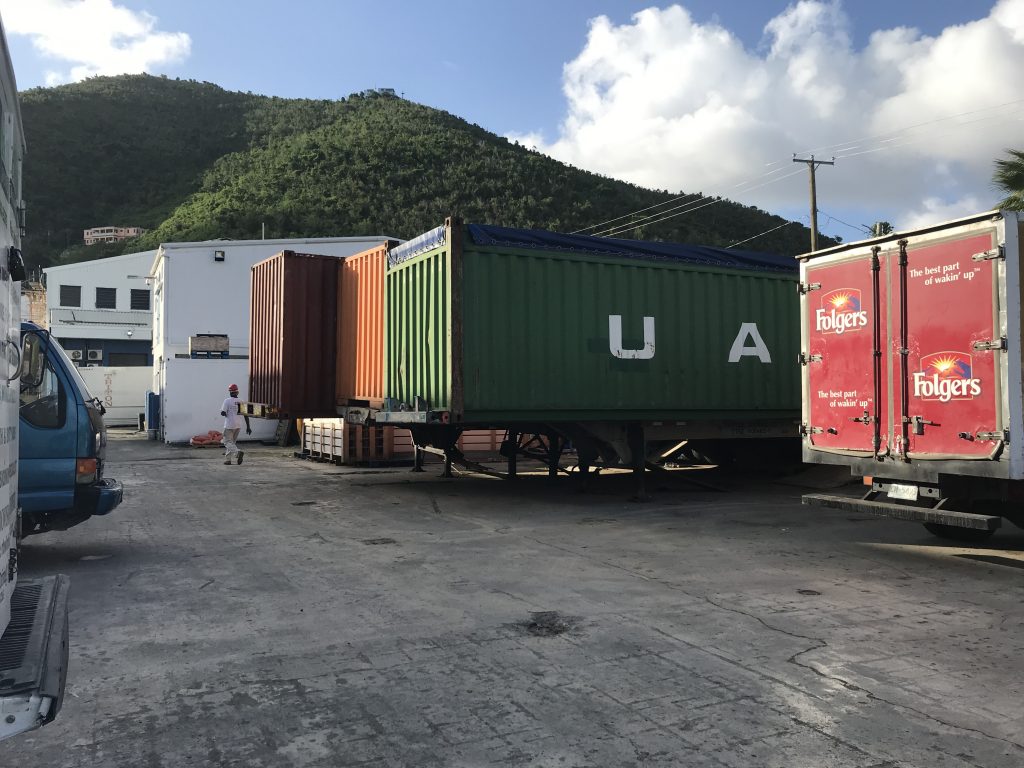 Containers sit outside Rite Way in Pasea on Tuesday. The company said it did not expect any shortages due to Hurricane Dorian. (Photo: CLAIRE SHEFCHIK)

Despite the Tuesday closure of a major Florida port and Tropical Shipping’s temporary suspension of sailings due to Hurricane Dorian, the average Virgin Islands consumer needn’t worry, according to Chris Haycraft, managing director of Island Shipping, which serves as the private agent for Tropical in the VI.

The territory has plenty of food on hand and ships were still scheduled to arrive throughout last week, Mr. Haycraft explained. Last Tuesday, Tropical announced that ships would sail on Thursday and Saturday of last week, making calls in Tortola.

“You won’t even notice it when picking up the groceries,” he said Tuesday.
Tropical Shipping sends several ships a week from West Palm Beach, Florida, to ports throughout the Caribbean, the VI among them. Sixty percent of the VI’s goods originate from Florida, according to Mr. Haycraft.

On Thursday, Aug. 29, some consumers might have been alarmed when Road Town Wholesale posted a Facebook update stating that Tropical had cancelled all sailings until further notice.

“Last week, when the storm was predicted to come to West Palm Beach, the precaution was to close the port [and] all operations would cease,” Mr. Haycraft explained.

The West Palm Beach port remained closed on Tuesday as the inclement weather passed. However, he added, “The ships are safely out of the way and not being affected, so they will resume and catch up very quickly. So maybe a 48-hour delay in getting fresh milk to the BVI.”

Such a short delay is unlikely to result in food scarcity due to a “memorandum of understanding” that local markets have with the VI government to keep an extra week’s supply of food on hand, according to Dawn Callwood, marketing manager at Road Town Wholesale.

She explained that the chain was expecting its regular shipment to arrive yesterday. The company’s Facebook page also displayed a photo of a ware- house stocked with goods, reassuring customers that no “out-of-stock” situation was expected.

“Up till last week we had more than adequate containers on island,” Ms. Callwood said.

Additionally, a container with produce arrived Monday morning, she added.
In her 13 years with the supermarket chain, she doesn’t recall any critical shortages of food due to inclement weather elsewhere.

During Tropical Storm Erika in 2015, “We did have a delay, and the only things that were affected were the produce,” she said.

Mr. Haycraft isn’t surprised that the idea of cancelled sailings might cause alarm among some residents.

Decades ago when shipping wasn’t as “logistically sound” as it is now, an interruption could sometimes result in 10 days between containers arriving. However, times have changed: After Hurricane Irma, he said, “You could still buy bottled water off the shelves.”

Even if one brand runs low, he added, a substitute is typically available.

Mr. Haycraft said it is unlikely that even a worst-case scenario — such as a hurricane affecting both the VI and West Palm Beach — would result in severe food shortages.

But after Irma, when VI ports temporarily closed, “We still got ships in and got containers off, and the same thing would happen in West Palm.”

If West Palm wasn’t available, he explained, containers could be driven to other ports and put on ships there. Ships also regularly make runs along the eastern seaboard to as far away as Canada.

“There will always be a way of getting produce and food onto the island,” he said. “You may not be able to get the Brussels sprouts or [have to] wait for your strawberries, but you can always get food in today’s age. I would not be afraid of running out of food.”