Local News > No gay marriage in VI, but could it be legal?

No gay marriage in VI, but could it be legal?

On Friday, the United States Supreme Court legalised gay marriage throughout the US, overturning dozens of state and territorial laws that prohibited such unions from being legally recognised. In the …

END_OF_DOCUMENT_TOKEN_TO_BE_REPLACED 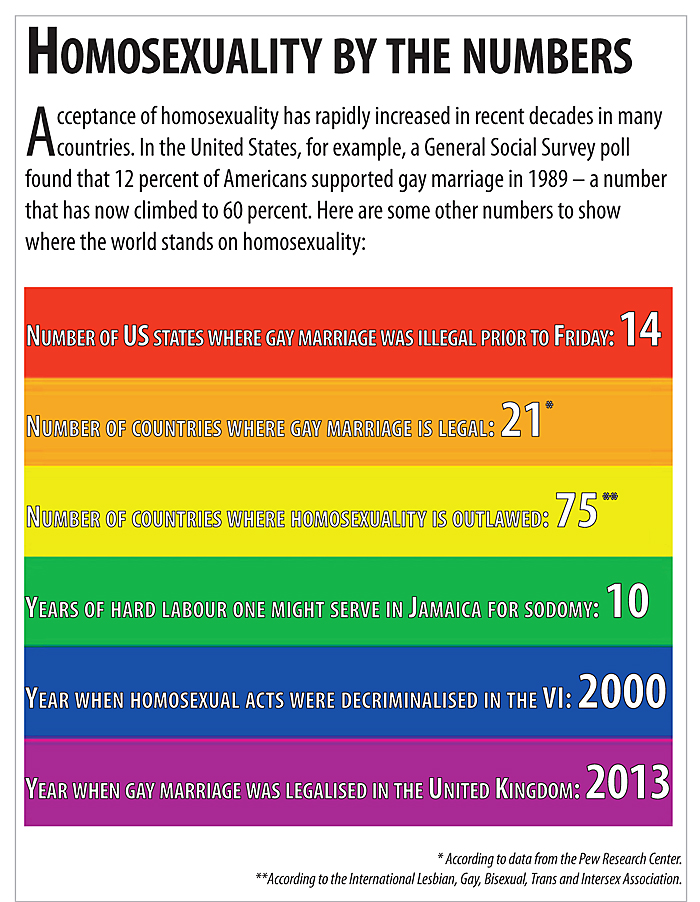 On Friday, the United States Supreme Court legalised gay marriage throughout the US, overturning dozens of state and territorial laws that prohibited such unions from being legally recognised.

In the Virgin Islands, politicians and other public officials have declared gay marriage to be illegal, but the laws surrounding the issue are much less clear.

This reporter has been unable to find any VI law that explicitly prohibits same-sex marriages or that defines marriage as a union strictly between a man and a woman.

“If the law does not define marriage as between a man and woman, then there is no legal bar to gay or lesbian persons being married here,” said a VI attorney who has argued constitutional cases before the Eastern Caribbean Supreme Court.

Though constitutions in other British overseas territories include such definitions, the VI’s doesn’t, and the territory’s Marriage Ordinance prohibits only close relatives and people under the age of 16 from receiving licences.

There are gender-specific terms in schedules attached to the ordinance, but government officials have not responded to requests to clarify whether these or any other provision might constitute a ban on gay marriage in the territory.

In the absence of such a ban, same-sex marriage would be legal, according to Jamaican lawyer and gay rights activist Maurice Tomlinson.

“Under the law, what isn’t prohibited is allowed,” Mr. Tomlinson said in an interview this week.

Two VI attorneys added that even if gay marriage were prohibited in the Marriage Ordinance, such a law might be challengeable under the VI Constitution, which describes marriage as a fundamental right and bans discrimination based on sexual orientation.

Registrar General Stephanie Benn, Attorney General Baba Aziz, and government Communications Director Arliene Penn did not respond to inquiries on Tuesday, but a public officer at the Civil Registry said that the agency’s policy is to refuse marriage licences to homosexuals.

She explained that even though she’s read the Marriage Ordinance and hasn’t seen any rule strictly prohibiting gay unions, the ban is implied because sodomy is prohibited in the territory.

This information, however, is inaccurate. An Order in Council from United Kingdom authorities in December 2000 nullified anti-sodomy legislation and other laws criminalising homosexual acts in the VI and other British overseas territories.

Moreover, a VI attorney who spoke on condition of anonymity scoffed at the idea that such criminal laws would have restricted gay couples from marrying.

“That’s funny. They have no way of knowing whether you will commit buggery,” he said. “And what about lesbians?”

The attorney was one of two VI lawyers who said that there appears to be a strong legal case to be made for suing the government if a gay couple were denied a marriage licence – both for constitutional and statutory reasons – but they declined to be named due to the controversy that surrounds the issue of homosexuality in the territory.

One of the attorneys said that the issue was often discussed in law school at the University of the West Indies, and that a constitutional challenge could force the territory to grant licences to gay couples, even if there exists a statutory law prohibiting same-sex marriage.

There are several clauses in the Constitution that indeed seem to imply that a ban on same-sex marriage might be overturned by the courts: Section 20 declares that marriage is a right; Section Nine states that fundamental rights apply to all persons, regardless of sexual orientation; and Section 12 states that “everyone is equal before the law.”

Mr. Tomlinson, an open homosexual, said that such clauses mean that there’s “more than a strong case” to be made for challenging the territory’s anti-gay marriage policies.

“I cannot give legal advice in the BVI, but the logical approach would be for a person to get denied a licence and then make a constitutional claim,” he said. “It would have to work its way through the system.”

However, Jane Cross, a US law professor and director of Caribbean Law Programs at Nova Southeastern University in Florida, pointed to a provision that may allow for discrimination in marriage: Though Section 26 of the Constitution prohibits discriminatory laws, there is a subsection that states that discrimination can still be constitutional “with respect to adoption, marriage … or other like matters.”

There is another provision that might allow for discrimination against gays, she said: a subsection that states that public officers can discriminate in performing the area of “marriage … and other like matters” as long as they’re “expressly or by necessary implication authorised to be done by any such provision of law.”

And while the Marriage Ordinance does not explicitly authorise discrimination, there is a form attached to the law that specifies that the “bachelor/widower” should sign one part of the application, and the “spinster/widow” the other.

It could be argued that the form’s language is the “necessary implication” the government needs in order to discriminate, though it “would be a stretch,” Ms. Cross said.

The argument would likely come down to analysing the intent of the legislators who drafted the bill, she said: Did they draft the schedule just for convenience, or specifically to ban gay marriage?

The fact that the law and accompanying form were drafted in 1925 might work in favour of someone challenging discrimination, she said, given the fact that lawmakers likely didn’t even consider gay marriage at the time.

“That could be your opening,” she said.

Finally, Ms. Cross pointed to a “public morality” clause in the Constitution, which states that the right to marry can be limited in the interests of “public order, public morality, or public health.”

Since there is a strong anti-gay sentiment in many Caribbean countries, Ms. Cross said, the government may be able to make a strong argument for discrimination.

“It’s kind of interesting because there’s a broad protection [in the Constitution] for everyone, but there are little loopholes here and there,” she said.

The two VI attorneys and Mr. Tomlinson all said they aren’t aware of any legal cases regarding the issue going to the Eastern Caribbean Supreme Court, and no cases are posted on the ECSC’s website.

Mr. Tomlinson – who is now working for the Canadian HIV/AIDS Legal Network after reportedly having to leave Jamaica because of death threats due to being “exposed” as gay – is currently advocating for other rights for gay people in the Caribbean.

In March, he argued in front of the Caribbean Court of Justice that laws in Belize and Trinidad and Tobago that restrict homosexuals from entering the respective jurisdictions are contrary to the Caribbean Community’s freedom-of-movement provision established by the Treaty of Chaguaramas.

Mr. Tomlinson also reportedly challenged Jamaica’s anti-sodomy laws in the Inter-American Commission on Human Rights in 2011 on behalf of two gay men allegedly discriminated against by Jamaican police, but those laws are still on the books.

He said he continues to fight for homosexual rights not only because he is a gay man, but also because homophobia has detrimental public health effects.

“I concentrate in the area of human rights and HIV, and work to tackle homophobia because it’s proven to increase HIV,” he said.

At least one study seems to back up Mr. Tomlinson’s assertion. The US National Institutes of Health published a study in 2006 that found that of 2,881 gay men, those in domestic partnerships or marriages with their partner have a “statistically significantly” lower rate of HIV and other sexually transmitted diseases.

The study suggested that a more socially tolerant community leads to a healthier population because gay men, for example, are less likely to resort to tactics such as marrying women to hide their homosexuality – thus putting the women at risk of contracting the disease in the process.

“Societal and legal recognition have an impact on the maintenance of safer sex behaviours,” wrote Dr. Jeffrey Klausner, a professor of medicine in the Division of Infectious Diseases and the Program in Global Health.

Arguments against same-sex marriage often hinge largely on assertions that it undermines the “traditional” family, hurting children and parents in the process.

In the VI, many residents have come out strongly against gay rights — so much so that one of the VI attorneys interviewed for this article said that he did not want to be named because he feared backlash from community members who oppose homosexuality.

“We have to ensure the floodgates of decadence do not open to this,” he said. “Evils are all around us, not just this one thing.”

Last year, another pastor, Reverend Bentley Thomas, spoke out against homosexuality during the annual Emancipation Service at the Sunday Morning Well, which was attended by Premier Dr. Orlando Smith, Education and Culture Minister Myron Walwyn, Communications and Works Minister Mark Vanterpool, and other leaders.

This week, Bishop John Cline, the senior pastor at New Life Baptist Church, said the US ruling is not a good thing for VI culture.

“This will impact the moral fibre of our community because a lot of tourists come from the US mainland,” he said. “If they think it’s okay there, they’ll come to the BVI thinking open behaviour as far as same-sex activities is okay.”

Mr. Cline said he wouldn’t go as far as banning gay people from entering the territory, but he added that the government should make it clear that they should “adhere to our moral code.”

“The government needs to come out and make a statement that even though it’s legal in the US, this is not the US: This is the BVI,” he said. “Similarly to when you go to places such as Saudi Arabia, you have public morals you need to adhere to.”