A week into the 2018 hurricane season, government has not yet released an updated list of emergency shelters, despite past promises from public officials that those details would be provided …

END_OF_DOCUMENT_TOKEN_TO_BE_REPLACED 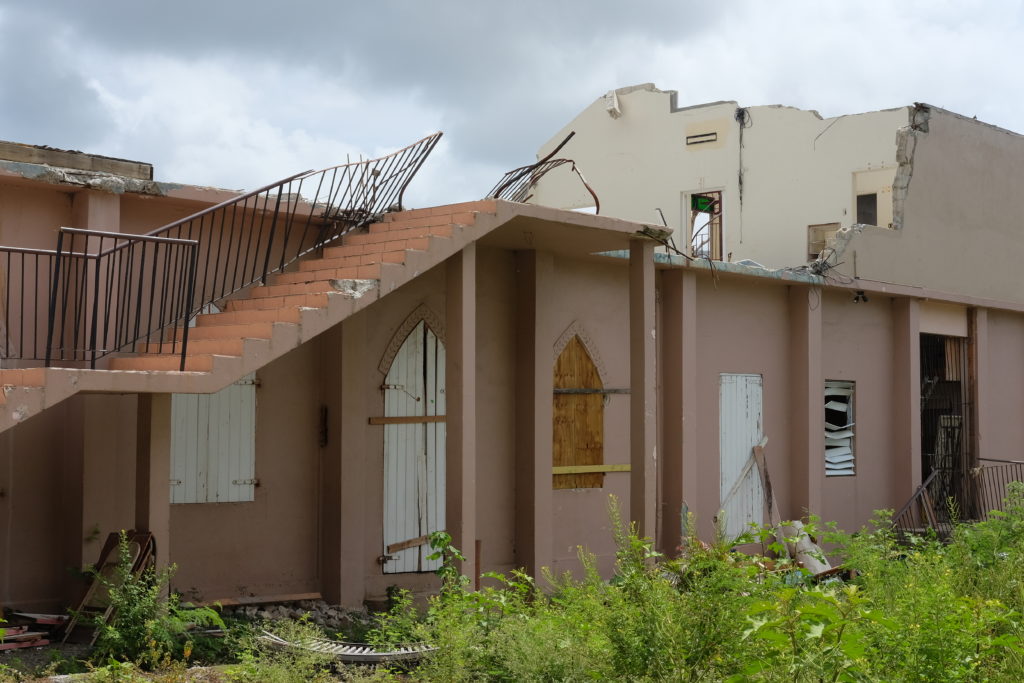 The Seventh-day Adventist Church in Road Town, which lost its entire upper floor during Irma, is one of five former shelters that disaster officials are recommending not be included on this year’s list. (Photo: AMANDA ULRICH)

A week into the 2018 hurricane season, government has not yet released an updated list of emergency shelters, despite past promises from public officials that those details would be provided at the start of the season.

Sharleen DaBreo, director of the Department of Disaster Management, told the Beacon in April that her department planned to publish the new list on June 1, and that an advertisement with that information is usually included in a local newspaper.

Deputy Premier Dr. Kedrick Pickering also reassured residents in a press conference this month that important emergency shelter information would be issued at the beginning of the hurricane season.

But on Monday, Ms. DaBreo said instead that the list would be released in the “coming weeks” while assessments of last year’s shelters are still ongoing.

Though an official list specifying where residents can go in case of an emergency has not been finalised or issued, updates from a report on the March and April deliberations of the Standing Finance Committee shed some light on the state of hurricane shelters in the Virgin Islands.

During a committee meeting, Ms. DaBreo told legislators that 13 out of 30 buildings could be usable again this year if some “emergency repairs” were made.

The DDM and the Ministry of Health and Social Development have marked the community centres as a priority for that restoration work in 2018, she said.

The cost of basic repairs will come to $281,000, excluding the Brewers Bay Community Centre, which would require more than $33,000 alone, the director reported.

However, to bring the damaged buildings to a “build-back-better standard,” almost $1 million more in funding is needed, according to the SFC report.

Ms. DaBreo also said in April that five shelters have been recommended for removal from the list: the Seventh-day Adventist Church in Road Town (which lost its entire second floor); the Church of God of Prophecy in Hope Hill; the Jost Van Dyke Primary School; the Brewers Bay Community Centre; and the North Sound Methodist Hall on Virgin Gorda.

The DDM has identified other buildings that could be used as shelters this year, Ms. DaBreo said, and hopes the total number of designated buildings will remain at 30 or above.

The Public Works Department and Environmental Health Unit will make “final decisions” this month as to which 2017 shelters will stay on the list, the director said at the time.

The DDM also asked during the committee meeting to go over its 2017 expenditure this year.

Ms. DaBreo stated that the agency’s “circumstances have changed drastically and that they are faced with having to rebuild a number of systems and re-establish programmes,” the report paraphrased.

In total, the director requested roughly an additional $194,000, which would go towards items like DDM salaries, the installation of new equipment, building operating costs, and the replacement of tsunami warning signs.

Other legislators reassured Ms. DaBreo that the increased funding should not be a problem, according to the report.

Junior Minister for Tourism Archibald Christian (R-at large) said the requested funds are “peanuts” and commended the department on its response after last year’s hurricanes.