No sirens sounded for tsunami advisory

Shortly before midnight on Tuesday, a tsunami advisory was issued for the territory, signifying the second highest level of emergency alert and potential danger of tsunami-generated waves in the area. …

END_OF_DOCUMENT_TOKEN_TO_BE_REPLACED 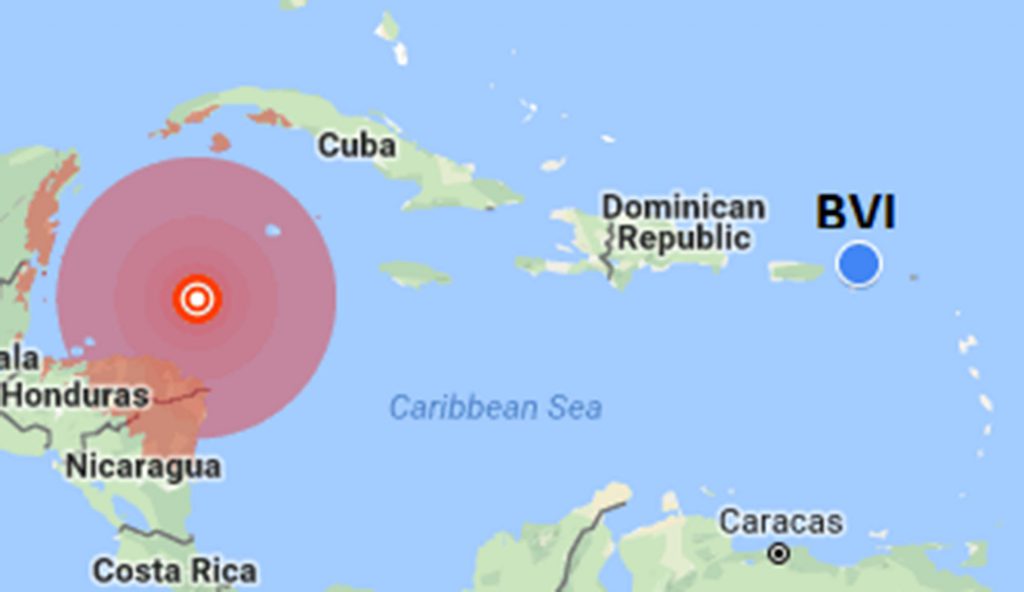 A 7.6 magnitude earthquake struck north of Honduras, about 1,446 miles West of Road Town, setting off a tsunami advisory for the territory late Tuesday night.

Shortly before midnight on Tuesday, a tsunami advisory was issued for the territory, signifying the second highest level of emergency alert and potential danger of tsunami-generated waves in the area.

But because the territory’s emergency equipment had been destroyed in Hurricane Irma, no sirens sounded.

A short time after the advisory was issued, however, it was downgraded, and it was finally cancelled in the early hours of yesterday morning.

The Puerto Rico Seismic Network put out the advisory for several island nations after a 7.6-magnitude earthquake struck north of Honduras, about 1,446 miles west of Road Town, according to the Department of Disaster Management.

An advisory means sea level is expected to repeatedly rise and fall by as much as one foot to 3.3 feet above and below the tide level in cycles that may take from five minutes to an hour. Dangerously strong ocean currents and minor flooding of beaches and harbours could also likely occur.

“This level of tsunami impact is a hazard to swimmers, surfers, divers, and others engaging in coastal ocean recreation or work activities. It is also a hazard to persons and boats in harbours,” DDM announced.

Before Hurricane Irma, the tsunami warning system — including sirens across the territory — would have been activated in this situation, but that valuable equipment was destroyed in the storm.

Instead, Sharleen DaBreo and Jasen Penn at DDM had to rely on disseminating information on Tuesday through other channels, including their website and social

“If we were in August, we would not have an issue getting information out,” said Ms. DaBreo, the DDM director. “The reality is the networks have been destroyed and basically we’re handicapped; we’re using everything that is available to us.”

The department posted several updates on Facebook and its website, and Ms. DaBreo said users who subscribe to the DDM site received notifications on their phone.

As for the lack of text messages from cell phone providers about the advisory, Ms. DaBreo stressed that DDM is not able to send those messages itself.

“DDM has no access to the cell providers’ network. The service providers have to be called, and someone would have to be available to send that text message,” Ms. DaBreo said.

She added that because the warning happened in the middle of the night, it would have been more difficult to contact service providers.

“The situation changes when it’s daytime,” she said. “People are more alert; they’re awake and you can better utilise the text message system.”

In fact, many people in the territory didn’t learn about the possible tsunami threat until yesterday morning, when it had already passed. For those who were awake to read real-time updates, there were mixed thoughts on what action should be taken.

Sian Alana Seys-Evans, who was housesitting at a property at sea level, was woken up by a text from a friend in the United States, warning her about the advisory.

After reading more about the threat online, she decided to jump in the car and spend the night at a house on higher ground.

“We were concerned about potential aftershocks and if we were staying a little higher up we wouldn’t have worried, but we were really low down,” she said. “It is a little concerning. For a significant tsunami, we’ve seen what it can do.”

In the next few weeks, DDM hopes to have half a million dollars worth of new equipment on the ground, including sirens, weather stations and telecommunication stations, to assist in getting more information out about potential tsunami conditions.

Government has committed to financing that equipment, Ms. DaBreo said, adding that she is aiming for the network to be back in place in the next several months.

In a final report on the Tuesday tsunami threat, DDM reminded residents that “we live in a seismically active zone, which makes the territory vulnerable to earthquakes.”

In the event of an earthquake, DDM advised, if you are inside you should remain indoors, get under a desk or sturdy piece of furniture, cover your head and hold on. If you are outdoors, move away from trees, buildings or poles and into an open area.

“During an earthquake, the more you move the more likely you are to be hurt, so refrain from entering or exiting a building at the time of the impact,” DDM said.