Thousands of visitors arrived in the territory aboard the Norwegian Getaway last Thursday, marking the first time the cruise line has returned to the Virgin Islands since Hurricane Irma more …

END_OF_DOCUMENT_TOKEN_TO_BE_REPLACED 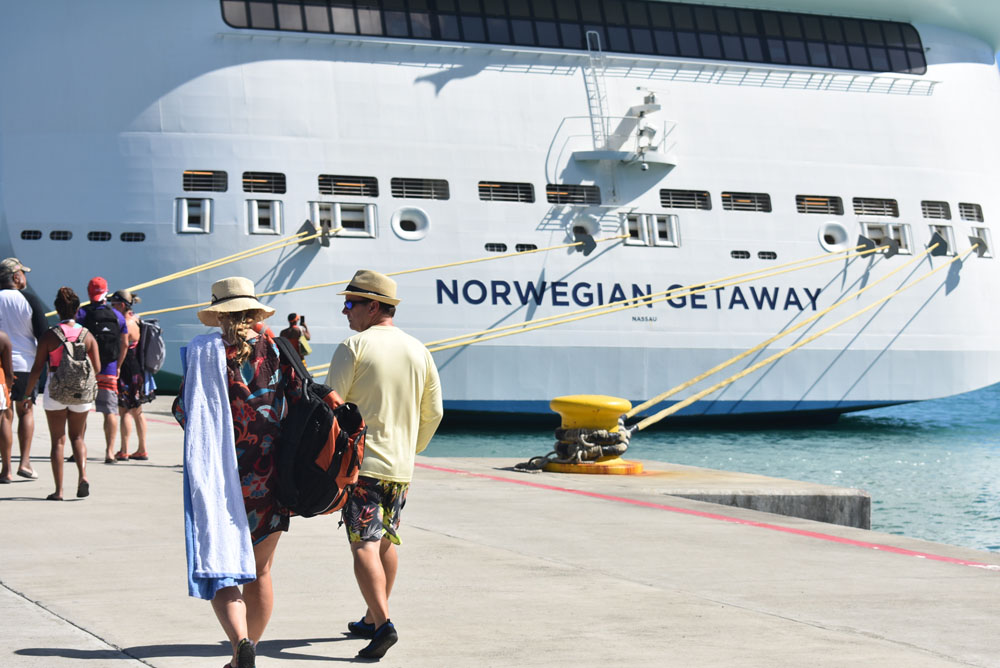 Thousands of visitors arrived in the territory aboard the Norwegian Getaway last Thursday, marking the first time the cruise line has returned to the Virgin Islands since Hurricane Irma more than a year ago.

For the Tortola Pier Park, the huge influx of tourists meant a boon for business.

Vendors within the park — some of whom only open on cruise ship days — readied displays of VI-themed knick knacks and prepared food and rum drinks as throngs of visitors flooded off the ship.

Cutelin Butler, who works at a kiosk called Isle of Tortola, said it was her best day of sales since cruise ships began returning to the island. Her wares, which include colourful T-shirts, shot glasses, magnets and other trinkets, don’t sell as well to residents as they do to visitors, she explained.

“Most people on Tortola wouldn’t want things that say ‘I love Tortola’ in their house,” she said.

Business has been slower than usual this year, but Ms. Butler is optimistic now that more cruise ships are arriving.

Disney Cruise Line returned to the territory in August with a 4,000-passenger-capacity vessel — the first cruise ship of that size to arrive after Irma. And Norwegian — which, along with Disney, sends the “big spend ships,” according to TPP merchants — has long been slated to return this month.

In honour of the occasion, Communications and Works Minister Mark Vanterpool presented a plaque to the captain of the Getaway last Thursday as “a token of appreciation and friendship,” according to a government press release. Other officials, including Governor Gus Jaspert, also visited the ship.

The pier park wasn’t the only place that got a pick-me-up from Norwegian’s return. Cruise ship passengers hopped on safari buses to traverse Tortola or took boats to other islands.

Stephen Adams and Juan Samada, visitors from Miami whose friends had just gotten married on the ship, decided to spend the day at The Baths National Park.

“It’s a paradise, basically,” Mr. Samada said, summing up his take on the VI. “Everyone was very friendly,” Mr. Adams added. “The people on Virgin Gorda were saying, ‘Thank you so much for coming.’”

Visitors also hit the Tortola highlights, including Cane Garden Bay. That beach remained the number one referral for passengers, according to Chemoia Hodge, who works for the TPP on cruise ship days and provides general information to off-loading passengers.

“[Cane] has places for food, they have water activities, and the children can play there and they won’t be out of sight,” she said. “But Long Bay Beach [on Beef Island] is mostly referred to if you just want to chill. It’s more quiet.”

Ms. Hodge’s job last Thursday was to provide lots of different information, not just about beach destinations and taxi services.

“There are mostly questions about the restrooms,” Ms. Hodge said, steering two confused passengers to the bathroom in the span of about three minutes.

But for some passengers aboard the ship, the stopover had greater meaning than merely spending a day at the beach and sipping a Painkiller.

“I have lots of friends in Puerto Rico, so, you know, they all came to Florida after [Hurricane Maria],” said Mr. Adams, one of the visitors from Miami. “We saw the news about the US Virgin Islands, and I think people forget that there are actually territories out here, too.’”

Norwegian will continue to feature a packed itinerary in the VI this year, with at least two more ships expected next month and five in December. Disney will also dock several more times in the VI in 2018.