In recent days, Family Support Network Executive Director Sasha Stout has seen firsthand the social fallout from the coronavirus pandemic. “I want to say I’m shocked, but I’m not,” Ms. …

END_OF_DOCUMENT_TOKEN_TO_BE_REPLACED 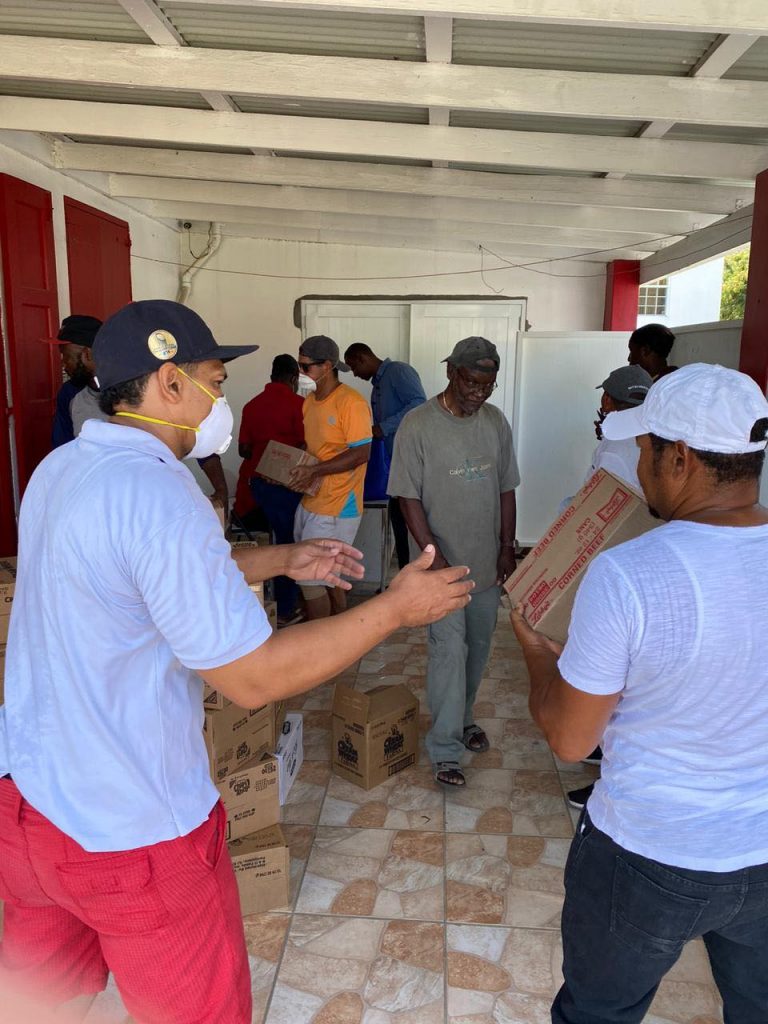 On Friday, the BVI Red Cross set up donation centres across the territory where, in some places, people started queuing at 6 a.m. to receive food and supplies. (Photo: PROVIDED)

“I want to say I’m shocked, but I’m not,” Ms. Stout said of the large number of people requiring her organisation’s help. “I’m overwhelmed, but not shocked.”

As the economic toll of the novel coronavirus rises, volunteers and non-profit organisations in the Virgin Islands continue to find new ways to help their community cope.

In the past week, the FSN partnered with government and One Mart to help needy residents buy their groceries, the BVI Red Cross has helped people process the mental and economic impact of the pandemic, the Unite BVI Foundation and other groups have coordinated donations to various causes, and a farmer based in Sage Mountain has donated the bulk of her most recent harvest to a senior home.

Before the 14-day curfew started on Saturday night, the FSN worked with residents who could prove that they were recently laid off as a result of the new restrictions, Ms. Stout said.

After helping calculate how much it would cost to feed their households for the duration of the lockdown, the FSN sent a budget to One Mart, where approved residents could shop for free within their limit, she explained.

Government supplied One Mart with much of the funding needed to cover the costs of the programme during the three days last week that residents were allowed to leave their homes to buy groceries, make bank deposits, and take care of other essential services, Ms. Stoutt said.

The Social Security Board and the territory’s Rotary club salso pitched in, donating $25,000 each to the FSN to assist unemployed and otherwise needy residents with purchasing essentials before the start of the 14-day curfew.

The combined $50,000 donation was expected to feed approximately 350 families during the period, according to the SSB.

The BVI Red Cross is also working to make sure residents have what they need.

On Friday the agency collaborated with the Ministry of Social Health and Development to set up donation drives at community centres on Tortola and the sister islands, where staff and volunteers handed out supplies ranging from toothpaste to flour to chicken, said BVIRC Executive Director Stacy Lloyd.

Even before the more stringent lockdown measures took effect, the agency was helping residents stock their pantries and obtain other critical supplies, as its staff and volunteers would deliver groceries and fill prescriptions for the elderly, Ms. Lloyd said.  These efforts are continuing during the lockdown, she added.

Along with the Social Development Department, the BVIRC has also worked to expand social services during the two-week curfew to include deliveries of food, care packages, vouchers and other essentials, according to a Monday press release from the ministry.

Additionally, on March 19, the BVIRC launched a “psychosocial hotline” operated by trained counselors to help ease the stress bearing down on many in the face of widespread job losses, health concerns, and other anxieties.

According to the ministry, officials working this hotline are also trained in responding to reports of domestic violence and abuse, which police said have been on the rise with residents required to stay at home in recent days.

The BVIRC has also taken to disseminating information across all of its social media platforms and some WhatsApp groups, Ms. Lloyd said.

“We’ve been doing a lot and I’ve been trying to get the word out, trying to reach as much homes as possible and help the most vulnerable in the community,” Ms. Lloyd said.

Another non-profit organisation, Unite BVI Foundation, has helped coordinate funding for various programmes to support the territory, according to a pamphlet released last month.

In the education sector, the organisation stated, it has worked to establish multiple online learning platforms and assisted in procuring 132 Chromebooks for public school students in the senior grades.

To shore up the territory’s medical capacity, the organisation also sourced a donation to purchase close to $300,000 worth of medical equipment for the BVI Health Services Authority, including 2,000 personal protective equipment kits and 15 visual infrared thermometers, the organisation explained.

Unite BVI also said it has spent more than $17,000 to make improvements to the territory’s elderly care facilities, purchasing a generator for the Adina Donovan Home for the Elderly and creating an isolation room there in case a resident contracts the coronavirus, among other measures.

Nea Talbot, the owner of Full Belly Farm in Sage Mountain, has been concerned about seniors’ food security during the crisis, she said.

Ms. Talbot grows herbs and produce that she normally sells to local restaurants. But she donated most of her most recent harvest— everything besides what she needs to feed her family — to the Adina Donovan Home, she said.

“I don’t really need the cash and I would rather make sure people get food,” Ms. Talbot said.

Prior to this, Ms. Talbot also operated a community-supported-agriculture programme where she sold her produce directly to consumers so that they could purchase food from places other than the territory’s grocery stores, which were becoming increasingly congested.

Ms. Talbot ceased this programme after about a week as it didn’t feel right to profit from a situation that is causing so many to struggle, she said.

Speaking to the Beacon last Thursday, Ms. Talbot wasn’t sure if she would be able to continue to donate to the senior home in the coming weeks, but she planned to reevaluate after making the first gift.

“I hope it just brings some brightness to their day,” she said.