Sometimes, it is more effective to count birds from the seat of a car. The reason: Many birds will not scare as easily from the sight or sound of a …

END_OF_DOCUMENT_TOKEN_TO_BE_REPLACED 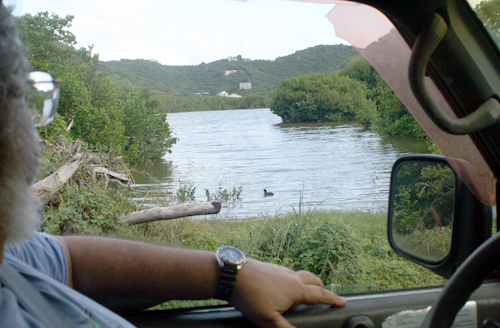 Sometimes, it is more effective to count birds from the seat of a car.

The reason: Many birds will not scare as easily from the sight or sound of a vehicle, but approaching them on two feet often spurs a bit of jitters.

Clive Petrovic, a biologist and environmental consultant, explained that nugget of advice while driving around Tortola on Saturday, eyes scanning the trees on either side of the road.

His car showed off the simple toolbox of a birder: A sheet of notes sat snug in the pocket of his driver’s side door, and a pair of binoculars sat on top of a guidebook behind the shifter.

Mr. Petrovic was participating in the annual Christmas bird count, a “citizen science” tradition organised by the National Parks Trust.

The NPT breaks the island up into zones, and different people volunteer to survey each. The volunteers — whether by car, on foot or while sitting on a chair on their back porch — monitor their assigned zones and tally the different species of birds they see and hear.

More than a dozen people volunteered for this year’s count, which is registered with the National Audubon Society, a United States-based non-profit organisation dedicated to the conservation of birds and their environments.

The NAS logs Christmas bird counts throughout the Americas, and has records of the Virgin Islands’ counts reaching back to 1988, according Nancy Woodfield-Pascoe, the NPT planning coordinator.

Obviously, something like the bird count is not an exact science, Mr. Petrovic said. There is a general calculation of how many hours were devoted to the year’s birding, but it is not controlled by the strict regulations of scientific observation.

So what is the point? Why complete citizen science initiatives?

“We get an idea of change over time,” said Mr. Petrovic, adding, “[The counts] give us an idea of the changes in the environments, the habitats. If the ponds and wetlands disappear, then there’s going to be a proportional drop-off in ducks and egrets and herons.”

Mr. Petrovic said the bird counts serve as one metric among many that environmental advocates and nongovernmental organisations use to lobby governments.

The NPT has presented birding data to the Planning Authority as a reference to encourage responsible development in areas that are thriving bird habitats, according to Ms. Woodfield Pascoe, who noted that the agency has been very responsive.

The counts can also serve as starting points or roadmaps for more exact scientific examinations in the future.

“Sometimes this kind of citizen science stuff will tip you off to something you may not have been as aware of, and you draw attention to it,” Mr. Petrovic said, adding that professional scientists “will benefit from some of the citizen science because they will look at all those data sets, and even if they don’t use them directly, they will help them, if nothing else, avoid wasting time.”

Scientists can use the accumulated bird data from the counts to see where the trends indicate certain birds are likely to be found at certain times, Mr. Petrovic explained.

In general, the NAS is looking for natural diversity in an environment — something the bird count can give a good snapshot of, according to Ms. Woodfield Pascoe.

That is why any type of bird seen in the week leading up to the count can also be reported, she added.

Ms. Woodfield Pascoe and Mr. Petrovic will examine the raw data over the next few weeks and accumulate it into an overall report for the year.

The NPT is planning another bird count for Anegada on Jan. 6, and Ms. Woodfield Pascoe is encouraging any volunteers, especially Anegada residents, to come out and participate.

“We’re always on the lookout for new birders,” Ms. Woodfield Pascoe said. “Let us know, keep an eye out and report any interesting bird sightings.”