With the apparently underfunded Recovery and Development Agency sidelining its plan to clear the territory’s waters and shorelines of derelict boats, government has stepped in to begin the process. A …

END_OF_DOCUMENT_TOKEN_TO_BE_REPLACED 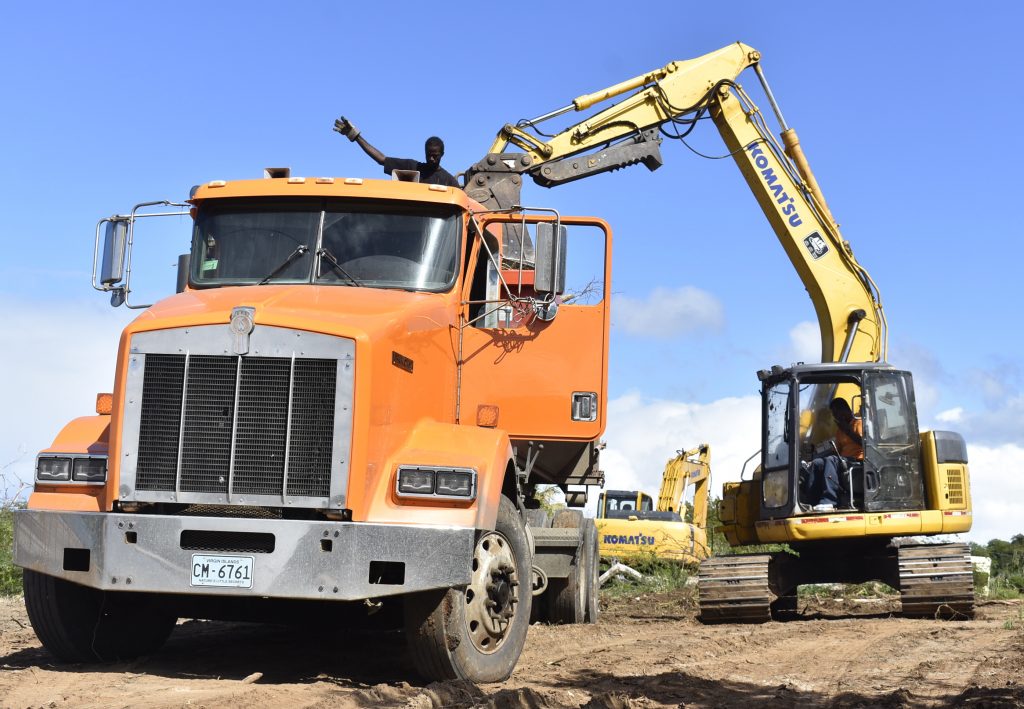 After the Recovery and Development Agency cancelled the tender invitation for bids to remove more than 200 derelict boats from the territory, the Ministry of Natural Resources, Labour and Immigration responded to community complaints and hired a contractor who began clearing Trellis Bay of derelict vessels on Dec. 27. (PHOTO: JOEY WALDINGER)

With the apparently underfunded Recovery and Development Agency sidelining its plan to clear the territory’s waters and shorelines of derelict boats, government has stepped in to begin the process.

A contractor hired by the Ministry of Natural Resources, Labour and Immigration has removed the boats dotting Trellis Bay’s coastline, a move that officials said was prompted by recurring complaints from tourists and business owners.

“I had received too many complaints … about how Trellis Bay looks, and that it reminded them of the hurricane and that we have not yet recovered,” NRLI Minister Vincent Wheatley told the Beacon on Friday.

Mr. Wheatley called the operation at Trellis Bay an “emergency cleanup,” and affirmed that the RDA will still be in charge of removing the rest of the derelict boats from the territory.

“The RDA will take the process going forward,” Mr. Wheatley said, adding, “We as a ministry don’t really have the time to manage a project of this size.”

In a Dec. 4 notice announcing the cancellation of tenders for the removal project, the RDA said that it expected to publish a revised tender invitation but did not specify when.

RDA CEO Paul Bayly has repeatedly declined interviews with the Beacon in recent months, and on Monday Colene Penn, RDA head of communications, would not say whether the agency would again solicit tenders for the project, nor did she give a further explanation as to why the original tender invitation was cancelled.

“I can confirm what is issued in our statement, and there’s been no further update on that project at this time,” Ms. Penn said.

Though Mr. Wheatley also could not confirm why the RDA cancelled the tender, he said that it may have been because of the project’s scale and cost.

“I would suspect it had to do with the scope of works, for this project is incredibly expansive,” he said.

Going forward, government has allocated $6,945,100 in its 2020 budget that it will transfer to the RDA so that the agency can again take up the clearing of derelict vessels, Mr. Wheatley said on Dec. 17 in the House of Assembly.

“Transfer of the funds to the RDA agency will allow for the resumption of the tender to remove derelict vessels in 2020,” he said. “Moving forward government intends to strengthen … the framework so as to ensure that the owners of vessels agree to the responsibility in this matter.”

In Trellis Bay, all boats were gone by Tuesday afternoon, though work continued as heavy equipment operators packed debris into dump trucks.

Some trash still lined the beach, but Kevin Laporte — who works at Mosaka Ventures, which is handling the project — said labourers had spent part of Monday and Tuesday picking up litter. “It was taken seriously,” Mr. Laporte said, adding, “We only took Christmas and New Year’s off.”

Because completion of the Trellis project cost less than $100,000, government did not need to publish a tender invitation, and Douglas Riegels of Mosaka Ventures — who also owns the Loose Mongoose Bar and Restaurant in Trellis Bay —was awarded the contract because he already had some equipment on hand and thus was able to finish the task for a low price, Mr. Wheatley said.

After the boats are crushed, their rubble is being stored in vacant land at Pockwood Pond while the ministry figures out how to process the debris and separate materials such as wood, fibreglass and metal from one another, Mr. Wheatley said.

Even before the project got under way, RDA officials recognised that disposing of the boats’ materials would be a significant hurdle.

In May, when salvagers, marine surveyors, recyclers and project managers gathered to discuss the best means of tackling the project, RDA lead planner Saski Lang explained the difficulty of responsibly handling fibreglass.

The material is commonly used to construct boats, but there is no way to dispose of it in the Virgin Islands, Ms. Lang said.

“As you’re all aware, this is not a clean waste-stream,” Ms. Lang said, adding, “We’re left with fibreglass hulls, and that’s something we’ll be looking for solutions with.”

One option being explored is shipping the accumulated junk to a facility in the Dominican Republic that will handle the processing and sorting of materials, Mr. Wheatley said.

Prior to the RDA’s cancellation of the tenders, the MNRL and Shipping Registry surveyed the territory for derelict boats, alerting owners of their intent to dispose of them and ultimately identifying vessels that should be removed, said Joseph Smith-Abbott, deputy secretary in the MRNL.

With this preparatory work completed, the RDA will be able to essentially resume the project from where it left off when it cancelled the tender process last year, Mr. Smith-Abbott said.

“It now allows for the project to be reinitiated,” he said.

Though Mr. Wheatley wasn’t sure exactly what role his ministry will play in the boat removal going forward, he affirmed his office’s dedication to preserving the territory’s environment.

“We can’t stop here: We’ve got to continue getting the BVI cleaned up,” Mr. Wheatley said.

In Trellis Bay, this mission is particularly urgent, according to area business owner Aragorn Dick-Read: A combination of boats littering the shoreline and a reduction in the bay’s mooring capacity as a result of a new shipping channel, he said, has negatively impacted area businesses.

“You see it immediately reflected in the numbers. The New Year’s Eve party this year was a tenth of pre-storm years as far as financial gains for the community,” he said.

Mr. Dick-Read was largely pleased about the recent cleanup, but he added that some concerns remain.

He and other Trellis Bay business owners have held several meetings geared towards beautifying their beach, which has suffered blows to its reputation, he explained.

These business owners will continue to strategise on how to improve the area, but so far government has not sufficiently responded to their worries, Mr. Dick-Read said.

Referring to the shipping channel issue, he said, “We haven’t actually had any sign of action, or proposed rectification of the situation, from anybody in government or the RDA or Shipping Registry or Ports Authority.”