Mapping the Virgin Islands’ waters is no easy task, but it’s under way with the help of the Recovery and Development Agency, the National Oceanographic Center from the United Kingdom, …

END_OF_DOCUMENT_TOKEN_TO_BE_REPLACED 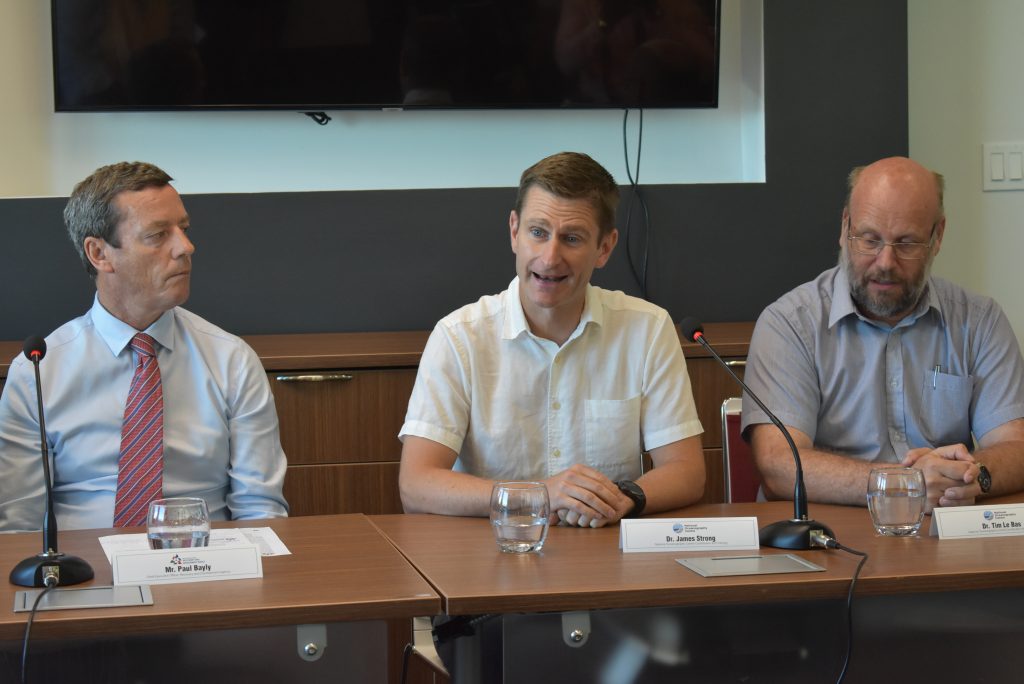 Mapping the Virgin Islands’ waters is no easy task, but it’s under way with the help of the Recovery and Development Agency, the National Oceanographic Center from the United Kingdom, the UK Foreign and Commonwealth Office, and the Ministry of Natural Resources, Labour and Immigration.

“This survey is going to inform how best to use these waters going forward,” said NRLI Minister Vincent Wheatley at a July 3 press conference at the RDA headquarters. “There is a significant transfer of knowledge from the experts at NOC onto our local teams here.”

Mr. Wheatley said the survey will help the territory make informed decisions based on evidence. He cited examples of people calling for restrictions on catching lobsters and turtles or banning single-use plastics, and said there is no hard evidence to “show what to do” in situations relating to the health of the territory’s waters.

The mapping, officials added, also will be used to develop a strategy for the territory’s “blue economy.”

“This strategy, of course, will be the means by which the Virgin Islands could ensure the economic opportunities of our beautiful oceans here can be realised whilst protecting a pristine marine environment,” said RDA CEO Paul Bayly. “This key pillar of recovery will take place in a greener way.”

With financing of $145,000 from the FCO under the Conflict, Stability and Security Fund, the survey consists of two parts: spending time out at sea to collect new data; and processing the data to create maps that provide information about the depth of the water and underwater habitats.

“Generally we’re very fortunate we have lots of toys to play with and lots of expertise within our departments to call upon,” Dr. Strong said after listing the numerous resources and equipment the NOC has access to.

The scientists brought their expertise and some of these “toys” out to sea in the territory over the course of six days, inviting the government and other members involved in the project to accompany them.

“We collected a little bit of data off the north of Tortola between Smugglers Cove and Cane Garden area, looking at the seabed there. We had no idea what it was gonna look like down there, and there’s some very interesting patterns on the seafloor which were sort of new to all of us,” Dr. Le Bas said.

“We’re here trying to do that training aspect as well. I’m hoping in the future we can assist with that as well.”

Other agencies assisting with the effort include the Department of Agriculture and Fisheries, the Environ- mental Unit of the NRLI Ministry, the Department of Disaster Management, Town and Country Planning, the Shipping Registry, and the Survey Department. Two non-governmental organisations, the Association of Reef Keepers and Beyond the Reef, are also involved.

For lasting legacy, Dr. Strong said there are three components: The first is teaching the fieldwork skills and laboratory skills to public officers in the VI; the second is buying the equipment; and the third is the political will to use the equipment and the data.

Of the total $145,000 budget for the project, $106,000 is going toward capacity building, and the rest will go toward purchasing equipment, Mr. Bayly said.

“We’re very keen on a long-term relationship with the BVI,” Dr. Strong said.

He suggested that the NOC and the VI agree to a memorandum of understanding to strengthen that relationship, and also said he was keen to get some people from the VI back to the UK.

“We have 650 scientists,” he said. “We’ve got a huge marine resource, so it seems like a very good pairing.”

Joseph Smith Abbott, deputy secretary in the NRLI Ministry, explained that the government hopes to continue its relationship with the NOC in a similar manner as its relationship with the Royal Botanical Gardens Kew scientists, who have mapped the geographical terrain of the islands for the past two decades and have recently completed Tropical Important Plant Area designations in the VI, the first of their kind anywhere in the world.

“One of the fabulous things about this particular project is the opportunity for young BVIslanders to have an awareness, to have an opportunity, to explore,” Mr. Bayly said. “Perhaps in the future we can have a generation of people who want to go and specialise overseas, get the training, come back and bring these skills not only to use in the BVI but to create businesses that generate income.”

‘Back to the Sea’

Tessa Smith Claxton, of the Department of Agriculture and Fisheries, agreed.

“As a Virgin Islander growing up in the territory and being surrounded by all this water, it is good to have the opportunity to see that there are ways in which we can use the ocean as a classroom, as a way to expand our think- ing and learning for the younger generation,” she said. “We have fished and we have sailed these oceans for a very long time, but there are areas that we really have not explored. It’s a very large territory when you take into consideration that this is 200 nautical miles of ocean that is relatively unexplored.”

Part of the blue economy strategy for the VI is the newly launched “Back to the Sea” programme at the H. Lavitty Stoutt Community College, which Mr. Wheatley said is designed to get Virgin Islanders interested in the marine sectors.