Official charged with breach of trust

Lorna Stevens, an assistant secretary who helped oversee the controversial Elmore Stoutt High School perimetre wall project, has been charged with breach of trust and released on bail, police announced …

END_OF_DOCUMENT_TOKEN_TO_BE_REPLACED 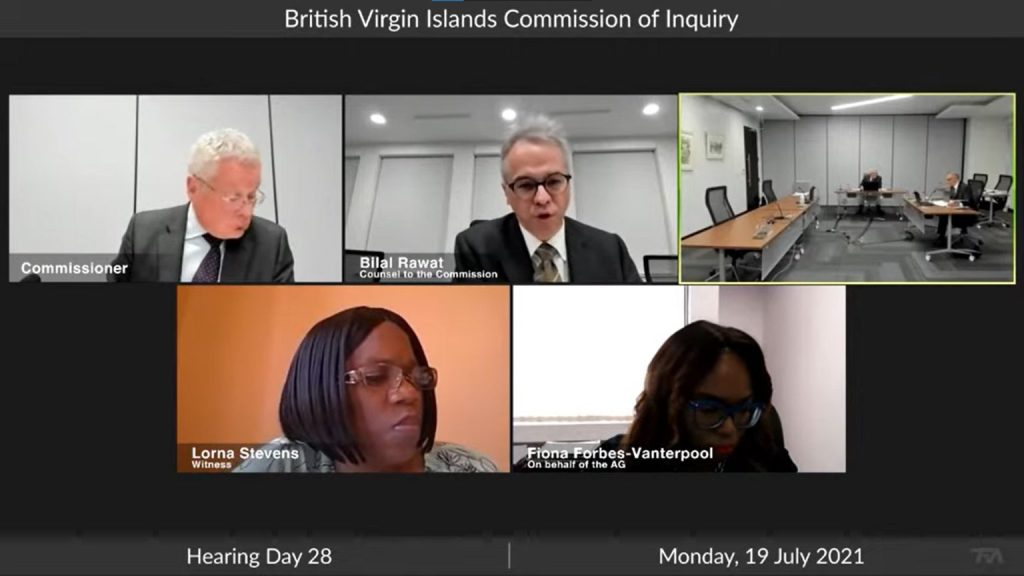 Lorna Stevens — the assistant secretary in the then-Ministry of Education, Culture, Youth Affairs, Fisheries and Agriculture — testifies before the Commission of Inquiry in July. (File screenshot: COI/YOUTUBE)

Police did not provide further details about the allegations, but last year the Commission of Inquiry questioned Ms. Stevens extensively about the ESHS wall.

The project — which commenced in December 2014 but was never completed despite more than $1 million spent — has faced criticism for years. In a 2018 report, Auditor General Sonia Webster blasted it for budget overruns and contract splitting, among other issues.

Ms. Webster alleged that the then-Ministry of Education and Culture overspent and ultimately failed to obtain good value for taxpayers’ money in part because the project was split into more than 70 work orders and 15 petty contracts. In March 2019, police launched an investigation into the project, but for the next three years they provided few updates and announced no arrests.

Last year, however, COI Commissioner Sir Gary Hickinbottom revisited Ms. Webster’s report in detail and used it as the basis for grilling public officials including Ms. Stevens and former Education and Culture Minister Myron Walwyn about the project. In his April report, Sir Gary reiterated Ms. Webster’s criticisms and recommended that the police investigation be allowed to run its course.

“The way in which the school wall project was contracted and implemented was, on any view, extraordinary,” Sir Gary wrote. “The construction of a single wall involved 70 different contractors, the majority of whom had no constructor’s trade licence, in circumstances which disregarded the increased costs and complexity that the use of multiple contractors would inevitably entail — which would inevitably put at risk any desire to get the works
completed at speed, as those involved, including [Mr. Walwyn], well knew.”

About two months after the release of the COI report, police announced in June that businessman Kelvin Thomas, of Chalwell Estate, had been charged in connection with the project. He was accused of obtaining property by deception, making a false statement to a public officer, and possession of the proceeds of criminal conduct, police said at the time,
adding that he had been released on bail.

Last year, the COI questioned Ms. Stevens about which officers oversaw the project, how costs ballooned from initial estimates, and related details. Ms. Stevens, who joined the ministry in 2009, said during a July 2021 hearing that she managed the project in its early days. She explained that her role was to ensure quotations were sought, manage Cabinet papers, oversee contracts drafted by the Ministry of Finance, liaise with consultants and contractors, make sure payments went through, and deal with project reports.

She also drafted the memorandum upon which Cabinet based its approval for the wall project, she said. Ms. Stevens told the COI that SA Architects, headed by Steve Augustine, had assisted her ministry with various projects for years before and after the ESHS wall — which she said started with the aim of addressing safety concerns at the school by replacing chain-link fencing with concrete.

Mr. Augustine was the external project manager for the wall, and his company came up with the initial $156,000 estimate to build 180 feet of block wall, she said. Ms. Stevens added that government’s Project Support Unit was intended to help manage the project, but it wasn’t functional enough to offer much assistance at the time.

Ms. Stevens was also asked who decided to carry out the construction primarily through work orders rather than petty contracts. She said that instruction came from Mr. Walwyn, based on the number of contractors involved. She added that he also decided which contractors got work orders for the first phase, which cost more than $96,700.

During a subsequent hearing in September 2021, COI Counsel Bilal Rawat suggested to Mr. Walwyn that the use of work orders resulted in increased costs and undermined the quality of work. He also suggested that Mr. Walwyn knew this would be the case.

For the first phase of the project, Sir Gary added, Mr. Walwyn could have given one petty contract under $100,000 instead of splitting the $96,000 cost between 11 work orders.

Mr. Walwyn responded, “It could have been done that way, but the Public Finance Management Regulations give powers for ministers to submit work orders. If the power resides in the Public Finance Management Act and the regulations, and the minister uses that power, then to call that contract as if something is wrong is not right because that power should not exist in the law.”

For the second phase of the project, he claimed that Cabinet, not he, decided to award multiple contracts. But Mr. Rawat noted that Mr. Walwyn nevertheless chose all the contractors for both phases and suggested as a potential criticism that he may have done so with an improper political motive in the election year of 2015.

Mr. Walwyn — who has strongly defended the project against criticisms — admitted that he selected the contractors, but said it was Ms. Stevens’ duty to vet them and make sure they had the required documents to operate. In phase two, 64 work orders were awarded. Ms. Stevens, how – ever, said during the July 2021 hearings that the contractors were not required to produce documents before accepting a work order. Mr. Walwyn said the failure to vet the companies was a systemic issue.