The Elmore Stoutt High School perimeter wall project, which has been investigated extensively by the Commission of Inquiry in recent months, was the focus of the last two hearings the …

END_OF_DOCUMENT_TOKEN_TO_BE_REPLACED 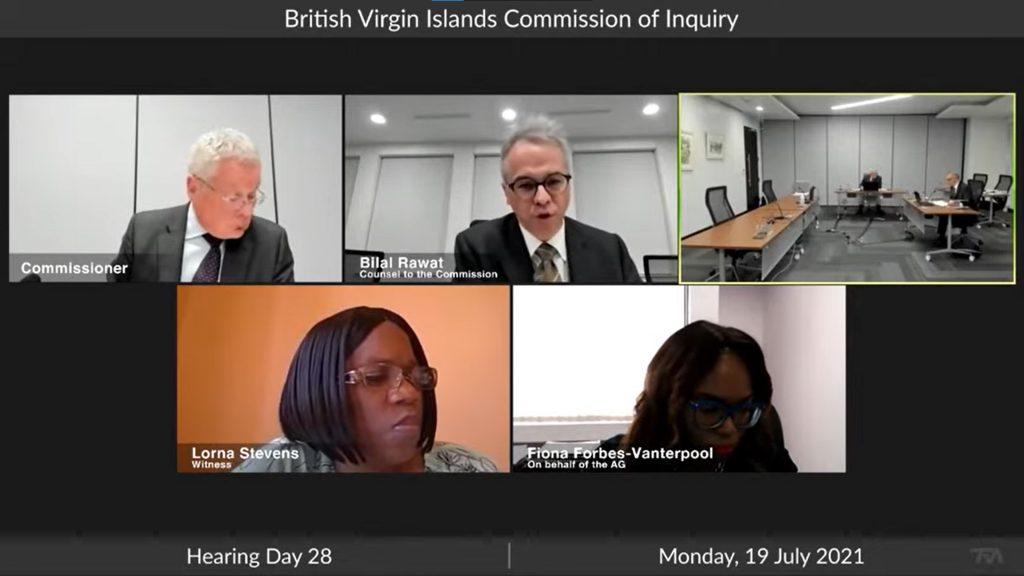 Speaking about the Elmore Stoutt High School wall project, Ministry of Education, Culture, Youth Affairs, Fisheries and Agriculture Assistant Secretary Lorna Stevens told the Commission of Inquiry on July 19 that the ministry leadership was aware that when it divvied up petty contracts for the project, it would end up costing significantly more than initial estimates. (Screenshot: COI/YOUTUBE)

The Elmore Stoutt High School perimeter wall project, which has been investigated extensively by the Commission of Inquiry in recent months, was the focus of the last two hearings the COI held last week before its break.

The commission focused this time on who was in charge of overseeing the project at the Ministry of Education, Culture, Youth Affairs, Fisheries and Agriculture, and how costs ballooned from initial estimates.

To that end, COI Counsel Bilal Rawat and Commissioner Sir Gary Hickinbottom questioned Ministry Assistant Secretary Lorna Stevens and former Finance and Planning Officer Carleen Jovita-Scatliffe on July 19, basing most of their questions on a report from the auditor general published in August 2018.

Ms. Stevens, who joined the ministry in 2009, said she managed the project in its early days.

She explained that her role was to ensure quotations were sought, manage Cabinet papers, oversee contracts drafted by the Ministry of Finance, liaise with consultants and contractors, make sure payments went through, and deal with project reports.

She also drafted the memorandum upon which Cabinet based its approval for the wall project, she said.

Ms. Stevens said SA Architects, headed by Steve Augustine, had assisted her ministry with various projects for years before and after the ESHS wall, a project that started in December 2014 with the aim of addressing safety concerns at the school by replacing chain-link fencing with concrete.

Mr. Augustine was the external project manager for the wall, and his company came up with the initial $156,000 estimate to build 180 feet of block wall, she said.

Ms. Stevens added that government’s Project Support Unit was intended to help manage the project, but it wasn’t functional enough to offer much assistance at the time.

Mr. Rawat asked who decided to scale this initial phase of the two-part project back to 120 feet, and she said the decision was prompted by limited project funds at the end of the school year.

He also asked who decided to do the construction primarily through work orders rather than petty contracts. She said that instruction came from then-Education and Culture Minister Myron Walwyn, based on the number of contractors involved.

She added that he also decided which contractors got work orders for the first phase, which cost more than $96,700.

Mr. Rawat asked where information originated about possible illegal activities on school grounds, including drug sales, that Mr. Walwyn has said prompted the emergency action to fix the wall.

She said it would have come from reports by the Royal Virgin Islands Police Force, the school principal, and any other reports filed with the ministry.

Ms. Stevens noted that drugs weren’t the only concern, though. Trespassing and possession of various weapons became an issue, she said.

She added that students also left campus to visit a car wash across the road, “which posed a major threat to the school premises.”

Mr. Rawat also consulted Ms. Stevens on early estimates for how much the total project would cost.

He noted that a Cabinet paper from January 2015 mentioned that the ministry got cost estimates from two sources and accepted the lowest figure.

Mr. Augustine, then working with Quantum Management, sent one of the estimates for a 2,695-foot wall meant to surround the whole school at $828,000, Mr. Rawat said. Ms. Stevens said she had no involvement with generating the figure.

“Did you have any responsibility for verifying the accuracy of the quote?” Mr. Rawat asked.

Ms. Stevens said she simply double-checked that the math on the project specifications was correct. She added that the ministry accepted Mr. Augustine’s estimate as realistic based on his previous work.

The second bill of quantities sought by Mr. Walwyn came from STO Enterprise, Mr. Rawat said, though he didn’t read out the estimate.

He questioned why the ministry considered the two estimates comparable when they differed significantly in the amount of work to be done. For example, he said, STO Enterprises measured the block work to be done longer than Quantum Management by several hundred square yards.

“There is a difference, yes, I would admit that,” she said. “But initially I was not on site when these two bills of quantities were done, so I can’t really confirm exactly what STO or SA Architect measured on the ground.”

Ms. Stevens said Cabinet made the decision about which option provided better value for money.

Mr. Rawat noted that Quantum Management’s estimate of $4,075.49 per wall section fell well short of the actual contracted cost of $9,461.65.

He asked if the ministry was aware that, based on these estimates, the cost could exceed $828,000. Ms. Stevens said Cabinet requested only a preliminary estimate, and decisions were made after the project got approval about how to divide the work among petty contracts and work orders.

“So internally within the ministry, you were aware that the cost would go over $828,000 if you used petty contracts?” he asked.

“That is correct,” she replied.

She then offered more detail about the selection process for contractors, which she said was done almost exclusively by Mr. Walwyn. She said while she could make recommendations for who to hire, the minister always made the final decision.

After Ms. Stevens testified, the commission called Ms. Jovita-Scatliffe, who began working with the ministry as a budget officer in 2011 and was promoted to the finance and planning officer in 2014. She answered questions about some financial issues with the project.

Ms. Jovita-Scatliffe said her main role was advising if there was money in the ministry’s budget for certain undertakings. As for SA Architects, she confirmed the company took responsibility for costing the wall project.

Looking at the 2015 memorandum Ms. Stevens had drafted for Cabinet, Mr. Rawat asked where the $828,000 was expected to come from, as it was only described in the letter as “sourced from local funding, details of which will be worked out by the Ministry of Finance.”

Ms. Jovita-Scatliffe said the funding was supposed to come from money already allocated to the ministry.

In response to other questions about her oversight responsibilities, she added that though her staff wrote up the petty contracts and work orders, she had no input on who would receive them. These decisions, she confirmed, were made by the minister.

Mr. Rawat asked, “As the work moved on and the costs increased, what impact did that have on the ministry’s budget?”

She answered, “It had a huge impact on the ministry’s budget because I had to request [from the Ministry of Finance] an additional $250,000 to complete the work.”

The COI team plans to resume holding hearings after August.