It’s strange leading a tour of a museum with almost nothing in it. But that’s what happened last Thursday, when Old Government House Museum supervisor Dora Scatliffe proudly pointed to …

END_OF_DOCUMENT_TOKEN_TO_BE_REPLACED 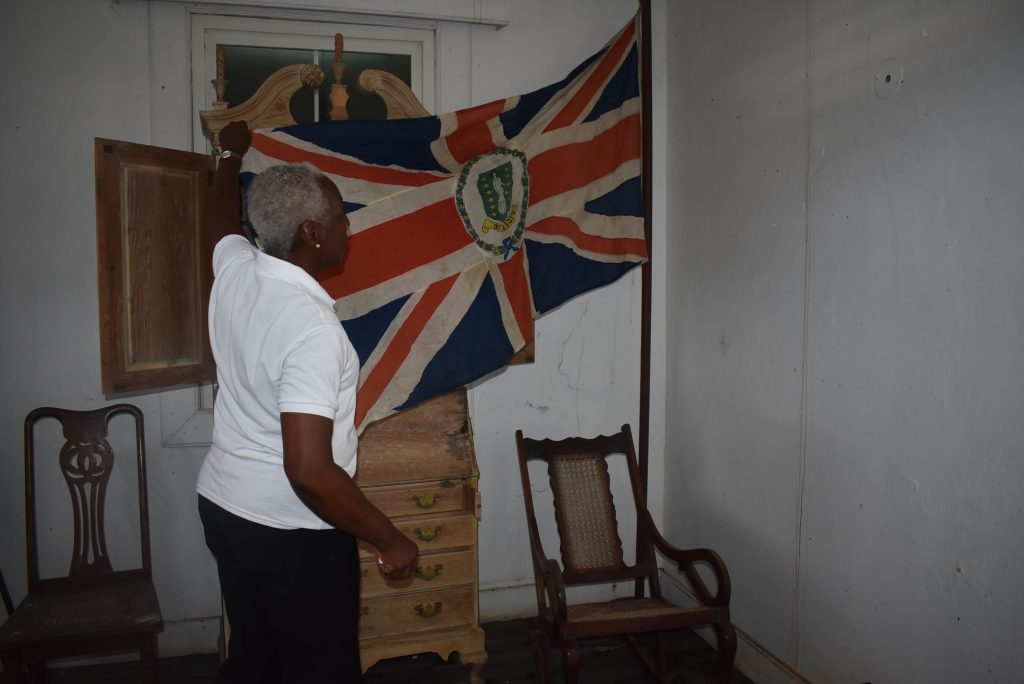 It’s strange leading a tour of a museum with almost nothing in it.
But that’s what happened last Thursday, when Old Government House Museum supervisor Dora Scatliffe proudly pointed to the 1980s murals of the Virgin Islands painted by Margaret Barwick, wife of former Governor David Barwick, with the help of high school students.

It was a tour Ms. Scatliffe has conducted many times. The only difference now is that many of the hundreds of pieces of antique furniture, photographs and books were swept away or ruined by Hurricane Irma.

Although the murals and a few pieces remain, she explained, most items that could be salvaged from the nearly 100-year-old structure were removed for safekeeping.

“Some were beyond saving; some will be renovated,” she said. That includes a 19th Century rifle that is now stored in the police armoury.

Some of the destroyed artefacts were irreplaceable, like the signed photograph of Queen Elizabeth II obtained during her one of her visits to the territory.

“There were many irreplaceable items destroyed,” she said.

But the tour guides may have more to show off again soon, as the museum’s board of directors begins a fundraising push to revamp the popular Road Town tourist attraction, which has been closed since the storm.

Prior to the tour, Governor Gus Jaspert and other board members spoke to reporters in the museum’s garden about their plan to raise $500,000 to make the house shine again.

“It is about more than just Old Government House,” Mr. Jaspert said. “This is about the territory coming back and celebrating its heritage, taking that heritage forward for the next generation, making sure we recover and rebuild.”

Board member Dr. Mitch Kent called the pre-Irma museum a “fluid” institution that was holding regular functions, earning money and demonstrating to younger generations the historical legacy of the territory.

“We were proving what museums in the Virgin Islands were,” he said. “We can be a fluid museum again. We just need a little bit of help, and that’s the whole point of this campaign.”

Volunteers, including schoolchildren, have been clearing debris, sweeping up shattered glass, and otherwise working to restore the grounds.

“You should have seen what this was like on the morning of Sept. 6,” said Ms. Scatliffe. “You would have had to see the level of destruction.”

True to the oft-repeated notion of “building back better,” structural changes to the house are also to come.

The previous building located at the site was the residence of VI governors dating from the late 1800s. In 1924, it was destroyed by a hurricane, and later rebuilt in 1926. It was occupied until 1999, when it was declared unfit for habitation and made into a museum.

“I can’t think of another building in the Virgin Islands that has such a history and heritage,” Dr. Kent said. “It’s a hefty sum we have to raise, but I’m entirely sure we can raise it.”

Mr. Jaspert declined to speculate on a timeline for the reopening.

“My ideal timeline is always ‘yesterday,’” he said, explaining that the sooner funds can be raised, the sooner work can begin.

A fundraising auction is set for Feb. 15 at the governor’s home as part of the newly launched “Love Old Government House Campaign.”

The stamp room, which previously displayed a collection of antique stamps dating back to the 1800s, is now nothing but bare walls.

In the house, there are a few gems remaining, including a 1920s mirror and an antique King George III-era table that one of the board members bought at auction in the UK with donated funds.

“It just needs to be restored good as new,” Ms. Scatliffe said. “These are things that can all be replaced with money.”

Downstairs, she pointed to the governor’s standard that had survived the hurricane of 1924.

“It has now survived the 2017 hurricanes of Irma and Maria,” she said, holding up the dusty, tattered flag. “It just needs a wash.”