Olympic long-jump finalist Chantel Malone returned to the Virgin Islands on Tuesday afternoon, and she was greeted by government officials, friends and other supporters at the Terrance B. Lettsome International …

END_OF_DOCUMENT_TOKEN_TO_BE_REPLACED 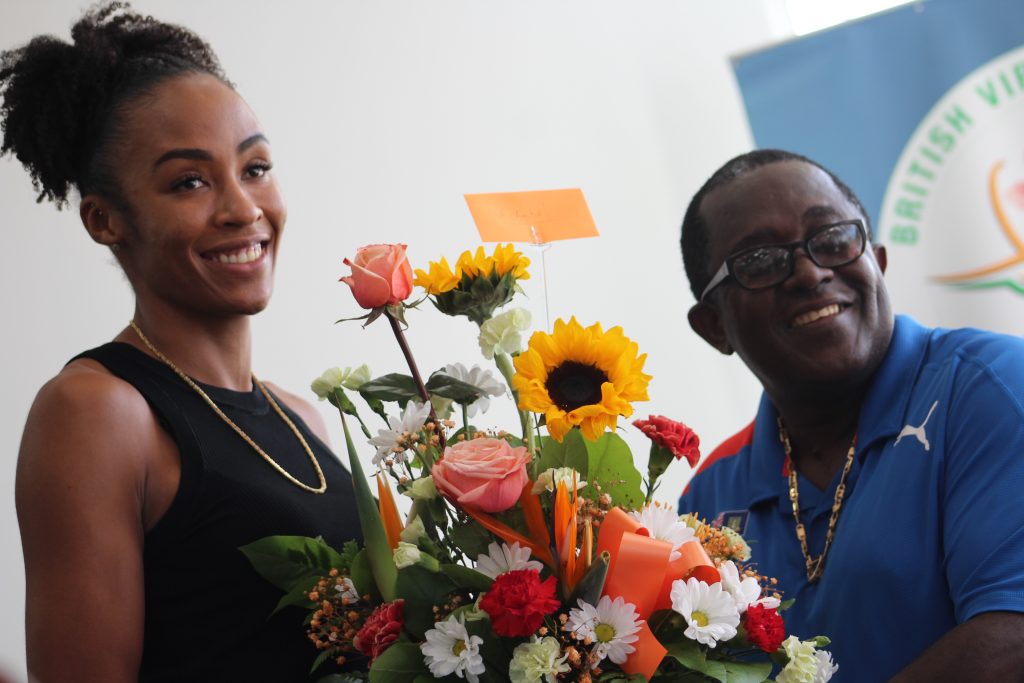 Olympic long-jump finalist Chantel Malone returned to the Virgin Islands on Tuesday afternoon, and she was greeted by government officials, friends and other supporters at the Terrance B. Lettsome International Airport.

Ms. Malone also received a $12,000 cheque from the government for representing the VI in the international competition.

“We are walking ambassadors for the BVI,” Ms. Malone said of herself and fellow Olympians Kyron McMaster and Elinah Philip. “Every time we step on that global stage, we represent the [VI], and I think we need to acknowledge that and support the athletes moving forward. I want my path to be something that can inspire [others].”

The press event was emotional for the athlete, who opened up about her struggles during the Olympics.

It was her dream to pursue the Olympics, and she focused all her energy on it, pushing her career aspirations aside, she said.

After finishing 12th in the long jump finals, however, she was very disappointed.

“The dream was to bring home the gold,” she said. “The part of me that has worked so hard for this dream couldn’t grasp why I had it in my hands and it just slipped.”

Following injuries including hamstring problems about two weeks before the competition, it was difficult for her to trust her body in the days leading up to the Olympics, she said.

“You could get swallowed [by negative think- ing],” she said, breaking into tears. “It’s been hard.” Ms. Malone thanked her family and others including her coach, teammates, the BVI Olympic Committee, the BVI Athletics Association, and the government for supporting the journey.

The athlete will spend a couple weeks in the territory before returning to train for her next competition, which BVIOC President Ephraim Penn said is just months away.

“I want to get back to a place where I’m re-centred,” Ms. Malone said.

While here, she plans to make school visits to her alma maters Althea Scatliffe Primary School and Elmore Stoutt High School. Ms. Malone will also host a sports camp along with the BVI Athletics Association.

In 2005, the long jumper became the first female from the territory to win a gold medal at the CARIFTA Games, and she has won six gold medals in the competition.

In college, she was a six-time NCAA Division One All-American. She’s the only individual athlete from the VI to win a medal in the NCAA championships.

In 2018, she placed second in the Central American and Caribbean Games and became the first gold medalist in the Pan American Games for the VI in 2019.