One Mart owner Mark Vanterpool thinks Virgin Islands residents should have more local places to shop. And by that, he means they shouldn’t have to go more than a few …

END_OF_DOCUMENT_TOKEN_TO_BE_REPLACED 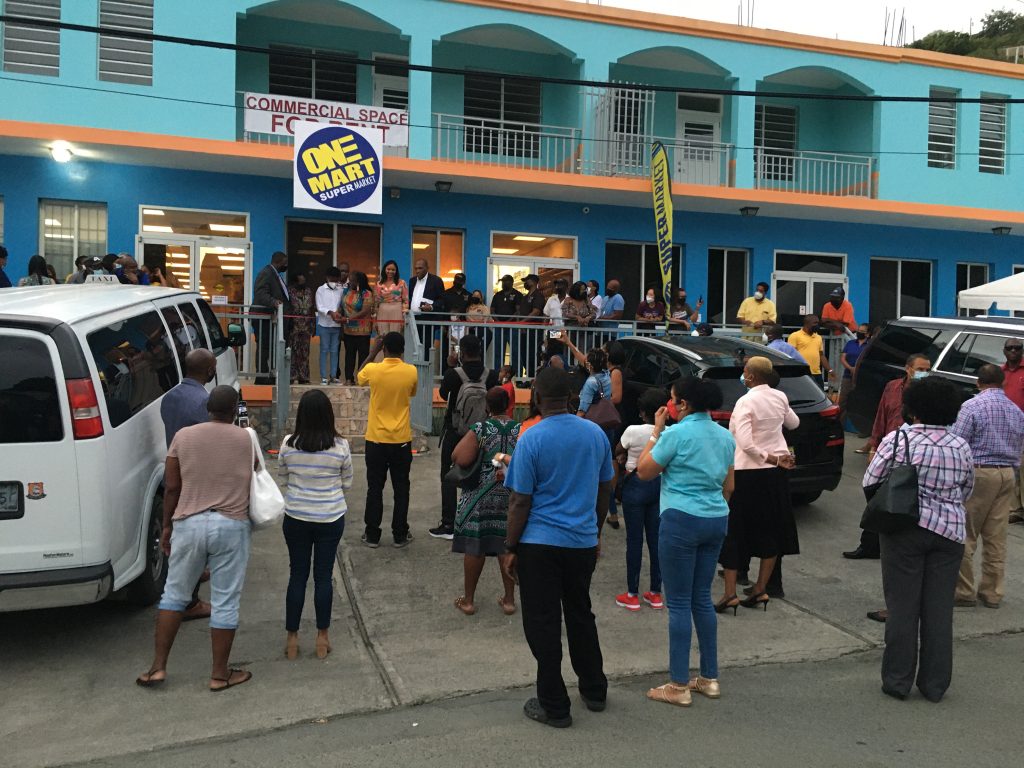 And by that, he means they shouldn’t have to go more than a few blocks for high-quality goods, he said on Friday during the grand opening of a new 2,500-square-foot store in Baughers Bay.

“I heard some comments: ‘another store two feet from the one he has down the road,’” he said. “‘Another one 500 feet away. Why does he need to have that? Is that business sense?’ Every time it has to be only business sense? Sometimes it has to be common sense. Sense for the people of the area. And that’s not politically speaking.”

Mr. Vanterpool, who is an opposition member for the Fourth District in the House of Assembly, explained that One Mart came from “humble beginnings,” and had its genesis in the small neighbourhood shop he grew up with in Huntums Ghut. His goal, he said, is to give people in the area that same type of reliable place to shop, both on a daily basis and in the event of emergencies.

“We want to have a store in the communities so that the communities can own that store just like the ones in Huntums Ghut owned it,” he said. “The people of Baughers Bay, this will be your store.”

He added that recent events have illustrated the importance of such convenience.

The Baughers Bay store is one of three Mr. Vanterpool said he hopes to open in the coming year, including a 34,000-square-foot supermarket in Fat Hogs Bay, according to a statement released in January. The statement reported “record” first quarter earnings for OM Holdings, the publicly traded company that is affiliated with One Mart.

In a process that started in 2020, One Mart’s holding company, KMark Foods, was acquired by the publicly held Portage Resources Inc, a Nevada-incorporated firm that first had sold off all its assets and liabilities as part of a restructuring process, according to a press release announcing the reverse merger. Portage was renamed OMHI, and Mr. Vanterpool was appointed CEO and chairman.

Last month, OMHI’s subsidiary, Atlanta-based Rydeum, launched a mobile ridesharing and delivery app in Jamaica called DoGetGo, which was available for download on both Apple and Google app stores as of this week.

In July, Rydeum signed a contract to supply what it calls “Local On-Demand Technology” to the Jamaican Union of Travelers Association, which claims to be the largest taxicab company in Jamaica. The company has said it plans to expand the service to other countries in the Caribbean.

“We had an excellent quarter,” Mr. Vanterpool said in the January statement. “With a break in the Covid lockdown and more people traveling, we saw an increase in revenue from food service thanks to the reopening of restaurants, and BVI residents continue to support our supermarkets. Our staff returned to a 40-hour week, and we made some additional hires for our new stores. We also saw an increase in deliveries even though the government lifted restrictions.”

He credited the post-pandemic bump in tourism for “increased assurance that this year will be another record one for our company.We also expect significant growthfrom the three new stores we willopen this year, as well as from thelaunch of our mobile app DoGetGo in Jamaica.”

“After the hurricane, manypeople ran to Baughers Bay andare living in this area,” she said.“So this supermarket is reallymuch needed here.”

Mr. Vanterpool founded OneMart in 1986, and the chain nowclaims to now be the second-largest grocery store in the VI.

It has lately announced a series of ambitious expansion plans.OMHI acquired Rydeum in2019. Mr. Vanterpool also announced last year that he had acquired the VI’s iconic Pusser’sfood, beverage and clothingbrand from its founder.

OMHI has been vocal aboutits plans to expand to the UnitedStates VI and elsewhere in theregion.