Local News > One weekend, 400-plus pounds of litter

One weekend, 400-plus pounds of litter

With one 10-person team working along the road near the ocean and another working the hillside, volunteers set to work clearing all the litter in sight on Sept. 18 in …

END_OF_DOCUMENT_TOKEN_TO_BE_REPLACED 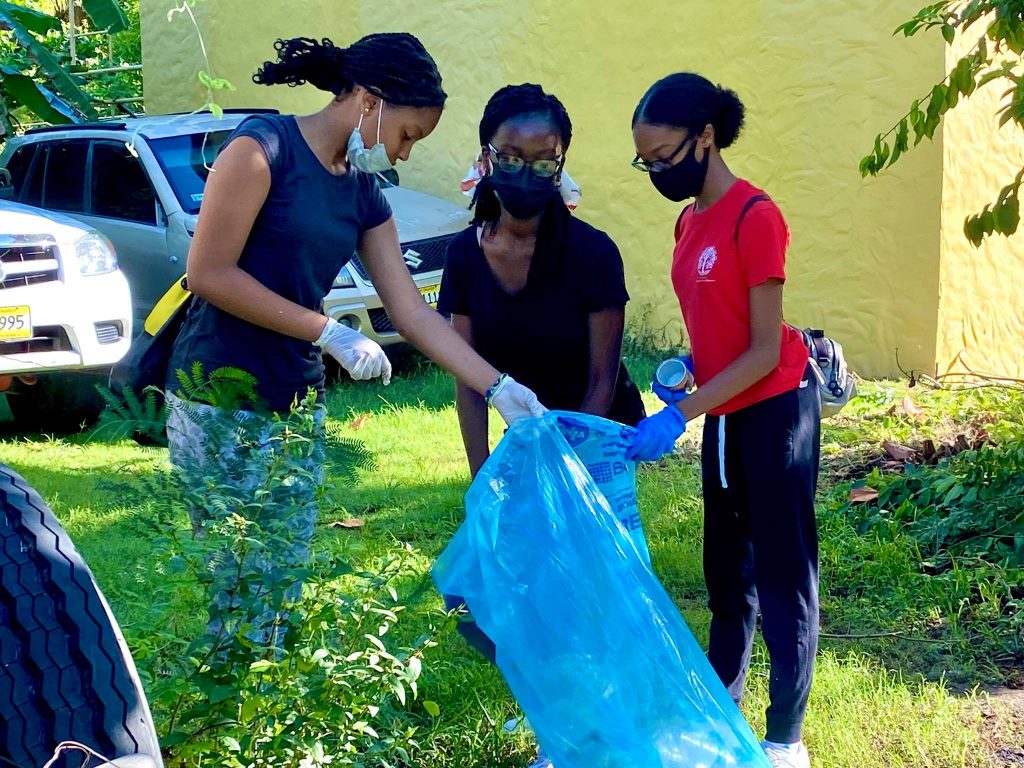 At least 250 community members put on gloves and grabbed trash bags to join the mission of cleaning up the Virgin Islands in honour of World Cleanup Day. During events on Saturday and Sunday, Green VI estimated that volunteers helped clear approximately 400 pounds of litter from the coasts across the territory. (Photo: DANA KAMPA)

With one 10-person team working along the road near the ocean and another working the hillside, volunteers set to work clearing all the litter in sight on Sept. 18 in West End.

Voices here and there would call out for the record when another plastic bottle, twist-off cap, aluminium can or unidentifiable bit of trash was added to the collection. Items that were clean enough went into blue bags destined for the recycling centre.

Between their efforts and those of volunteers across the sister islands, Virgin Islands residents picked up more than 400 pounds of litter in recognition of World Cleanup Day.

The idea began in Estonia in 2008, with teams around the country coming together for one day to clean up the country. Now, the lead organisation, Let’s Do It World, says that more than 150 countries participate in the annual event.

In previous years, the Ministry of Natural Resources, Labour and Immigration has led the initiative in the VI. Though the pandemic prevented the event from happening last year, Ms. Hector said Green VI was glad to partner with government and non-profit groups to bring it back.

“We’re using it as an opportunity for people to see that we have a waste issue on our island,” she said, noting that health issues can arise from ocean pollution here.

But Ms. Hector said she was delighted to see the high energy that volunteers brought to this weekend’s effort and the promise of future collaborations.

Attendance was highest at the Sept. 19 event organised with the Humane Society of the BVI at Trellis Bay, where more than 100 people showed up, she said.

Participants with Beyond the Reef, the District One Committee, Green VI and throughout the community pitched in at West End on Sept. 18, starting at the basketball court and ending by the bridge to Frenchmans Cay.

Eagle-eyed young volunteers led the pack, calling out what they found to the staff who kept tallies with the Ocean Conservancy’s Clean Swell app. They encountered larger items like a car tyre and tangles of fishing equipment, and smaller items like the bits of plastic flowers that blew over from a nearby cemetery on some windy day.

Volunteers passed the two hours swapping stories about recent hikes and enjoying the occasional tart sea grape, working until they reached the bridge just as the late-morning heat set in.

Senior project managers Lauralee Mercer and Natasha Harrigan said they were thrilled with the interest generated by the event, especially considering some groups like the youth group at St. Paul’s Episcopal Church in Sea Cows Bay have pledged to “adopt a spot” and commit to help keep them clean on a regular basis.

Ms. Mercer said the effort isn’t limited to clearing litter — it also focuses on long-term solutions to revitalise important areas. For example, volunteers also planted an almond tree on Sept. 18 at the Bubbly Pool on Jost Van Dyke, where hurricanes Irma and Maria had destroyed swaths of vegetation.

Activities like this weekend’s cleanup provide an opportunity for young people in particular to get hands-on experience with environmental work, seeing how the explosion of single-use plastic water bottles following the 2017 hurricanes continues to affect the islands by ending up on the coasts, according to the volunteer.

“There were a lot of bottles that we couldn’t even get to today, just because of the difficulty in getting to them,” she said, pointing to tangles of roots along the water’s edge. “But they’re ending up in the water. They’re on the land. And when they break down, they don’t go away — they just break down into smaller pieces.”

Microplastics are any pieces measuring less than five millimetres, about the size of a sesame seed, and Harvard University researchers report that an estimated 14 million tons of microplastics exist on the ocean floor.

“Once we can gather people’s minds and help to understand what kind of impact we’re having, we can change people’s mindsets and therefore change behaviour,” Ms. Mercer said. “Then our behaviour changing can then mean a difference being made in the community.”

Ms. Harrigan said that by the end of the day, the kids in her group were brainstorming ways to reuse a heavy-duty plastic crate and otherwise embracing the mantra of “reduce, reuse, recycle.”

She said it will take longer for the community to learn how to address issues like the abundance of wasted plastic tackle, as evidenced in the water that day, in a region that relies on fishing.

“Raising awareness is paramount,” Ms. Harrigan said. “And this is just the first step.”

One of the West End’s volunteers was K’Launi Williams, a winner of the territory-wide We Recycle student competition held last year to see who could collect the most recyclable items. The initiative prevented nearly 43,000 pounds of recyclables from going to the incinerators, according to a government press release. By participating in beach sweeps and collecting from friends and family, Mr. Williams said he was able to divert more than 500 plastic items from the waste stream.

While he was glad to win a new laptop for his efforts, he said wasn’t in it for the prize. He wanted to work toward reducing the amount of plastics in the territory while educating others about the importance of acting now to protect the long-term health of the environment.

As for what students gained from participating in the contest, he said, “I hope that they remember that the Earth was here before us, and it’s going to be here after, even when our generation passes on.”