One year later, some still struggling

Kennard Malley is still waiting to get his electricity restored. But before he does, he needs a roof. Mr. Malley, who works as a security guard at Nanny Cay, lived …

END_OF_DOCUMENT_TOKEN_TO_BE_REPLACED 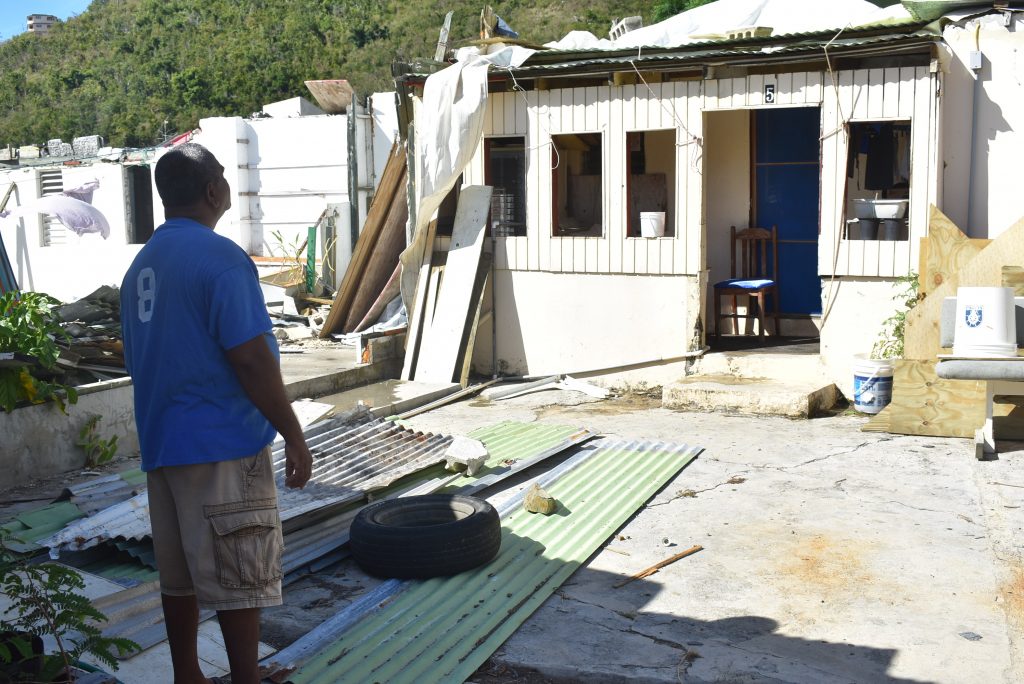 Kennard Malley stands outside his Sea Cows Bay house, which hasn’t had a roof or electricity since Hurricane Irma hit. Te BVI Electricity Corporation won’t reconnect a home without windows and a roof. (Photo: CLAIRE SHEFCHIK)

Kennard Malley is still waiting to get his electricity restored. But before he does, he needs a roof.

Mr. Malley, who works as a security guard at Nanny Cay, lived at the marina during Irma but moved into the Sea Cows house in December. He said his landlord can’t help him.

Either way, he’s on his own. In the meantime, the house is covered by a few loosely attached sheets of galvanised metal.

“I got to deal with the electrical on my part,” he said. “As soon as I get it complete, I get an inspector to come and inspect the wiring; then I get the form to get electricity and pay the outstanding bills.”

He hopes that will happen soon, he said, but added, “I don’t know how long.”

His neighbours, also roofless, are in a similar state.

Though every house that is prepared to receive electricity is now hooked up, according to the BVI Electricity Corporation, there are 2,734 fewer customers receiving electricity than before the storm, suggesting that thousands of houses and other buildings have not been sufficiently rebuilt for a hookup.

All told, 4,240 houses were damaged or destroyed in the storm, the Department of Disaster Management reported in October. Chief Planner Greg Adams said this week that government is currently assessing the territory’s progress by matching up those numbers to the repairs that have been made, and statistics should be available in about a month.

In August, Petrona Davies, permanent secretary in the Ministry of Health and Social Development, confirmed that 17 people were still living in emergency shelters in Tortola and Virgin Gorda.

That figure has dropped from the 21 reported in April, when inhabitants of the Multi-purpose Sports Complex were moved to a shelter at the Long Trench Community Centre. Additionally, on Jost Van Dyke, seven people were still living in ShelterBox tents, which were distributed by Rotary clubs soon after the storm, according to an official there who declined to be identified. That was down from around 25 in November.

“They are either uninsured or underinsured; you can’t get material or contractors and there’s no money,” she said. “That’s causing a lot of stress for people.”

Even for those who have insurance, she said, premiums have climbed so high that some may worry about how to pay them. The elderly are particularly vulnerable.

“A lot of people who lost their roofs are in old houses,” she said. “They paid off their home, so they didn’t keep up with their insurance; they had no means of paying [to rebuild]. It’s going to be difficult for them to even get loans.”

Meanwhile, the economic toll of the storm continues to reverberate.

“Some people are out of work,” she said. “Hotels are still closed. So that’s a problem.”

Nevertheless, she is cautiously optimistic that the situation will improve in the future.

“But with this level of damage I don’t think that we’re going to have a quick fix, so it’s going to be a process,” she explained. “I didn’t expect that we were going to be able to [completely] rebuild after a year.”

While Mr. Malley suffers from too little water in Sea Cows Bay, others dread receiving too much.

Last Thursday, as rainwater rushed through the ghut that separated his property in Johnsons Ghut from the former Rite Way car park, Gustavo Benson put on some music while his daughter smoked a hookah with her friends on the porch.

They were ankle-deep in puddles. Part of his roof has been covered with a tarp since Irma, and he’s in constant danger of being flooded out while living with his wife and two children in another part of the house. There’s no fix in sight — at least not until he finds some work.

He used to work construction, but hasn’t had much luck finding a job, he said, and nobody else in his family works. His refrigerator and freezer are broken and he can’t afford to replace them. He said he is lucky he lives next to Rite Way.
“I go procure food for today, supermarket tomorrow,” he said. “I have to go to the supermarket every day.”

Some residents aren’t worried about money, but just need more time. On a weekday afternoon in August, Wendell Parsons was seated in a wooden chair on his front porch in Huntums Ghut, listening to the sounds of hammering and drilling going on up and down the road as homes were repaired. But not his.

Mr. Parsons, a retired boat captain who received the BVI Badge of Honour last year for his services to the government, said he built the house himself in 1957, making it, as near as he can determine, the oldest house in the immediate area. He lives there with his two adult sons.

“There was nothing here before,” he said, pointing to the houses that had sprung up across the road in the half-century since. “There was a man over there who kept cattle. There was no road down here, no lights.”

After his roof blew off in Irma, he was chosen by Rotary to receive a roof replacement at no charge. Although the work has started, he said there’s no end date in site. The workers weren’t coming the next day, and he didn’t know when they would be back.

“They need to tell me some more, like when the roof is going to be finished and when they’re going to put the gutter in,” he said.
He doesn’t have electricity to the upstairs portion of his house even though he’s paying for the meter. But he did report some improvement. At least, for example, the house isn’t being flooded regularly because there’s enough galvanised metal there now to block the water.

“Before, there was no roof, so all the water went [through], but it’s not leaking now, so it’s much better,” he said.

Like many in the territory, he was blindsided by the strength of the storm, having seen nothing like it before in his lifetime. However, having lived in his house most of his life, he had faith that it would hold together.

“Nothing happened downstairs,”he said proudly, pointing to the wooden windows and doors that had survived the storm.

On Anegada, Spouge McGoff hasn’t moved far since Sept. 6. On the day of Irma, he and his dog took shelter at a friend’s concrete home and returned to find his own wooden dwelling a shambles.

“My house was completely destroyed,” he said.

For most of the next year, he lived with a tarpaulin covering the friend’s house, sleeping on a folding cot in the kitchen or in a covered area outside.

It wasn’t until August that the two resi- dents finally managed to put on a makeshift roof.

“We’ve got one, two, three cisterns that were full after the hurricanes,”he said.“We’ve never been con- nected up to the town water. I bathe by a friend’s house. They have a nice hot shower and they do my washing; they have a washing machine.”

For now, he’s grateful just to have any hot water at all.Being British-born, “I drink tea all day,”he said.

For Mr. Malley and his neighbours in Sea Cows Bay, the problems keep piling up. On Aug. 20, he said they had had no water for three out of the past seven days.

“Not a drop,” he said. “Not a drop. No an- nouncement on the radio or nothing about water. Maybe tomorrow it’ll be gone again. Nobody knows when it’s gonna be gone.”

He added that he knew the reason for the lack of water.

“This thing is a political thing,” he said.

Last month in the House of Assembly, Communications and Works Minister Mark Vanterpool and Third District Representative Julian Fraser pointed fingers at each other for the problem. Mr. Vanterpool blamed Mr. Fraser, the previous minister, for his 2010 de- cision to locate the Biwater plant in Paraquita Bay, which he claimed is too far away for the water to travel efficiently.

“It is difficult because of the system which was created, not by me, by [Mr. Fraser],” he said.

But Mr. Fraser accused the minister of making excuses, saying the distance between the two lo- cales is just 12 miles.

“For years now I’ve been coming asking the minister about water in the Third District and for years he has been giving me these answers: He is going to put in pumps, this and that. Now he is telling us about logistics. It seems to suggest that nothing is being done,” Mr. Fraser said.

As politicians bicker, Mr. Malley said he thinks his entire district is being shortchanged. “The last area to be cleaned up of garbage was Sea Cows Bay,” he said.

Despite all the problems with his house, he’s still paying $650 a month for rent — and said he’s happy to continue rather than try to move. “To where?” he asked. “Where are you going to find an apartment? That’s the problem.”