Local News > Back to school, at home

Back to school, at home

The public school year will open on Monday, but students won’t go back to school. Instead, they should expect to learn from home for the rest of the year as …

END_OF_DOCUMENT_TOKEN_TO_BE_REPLACED 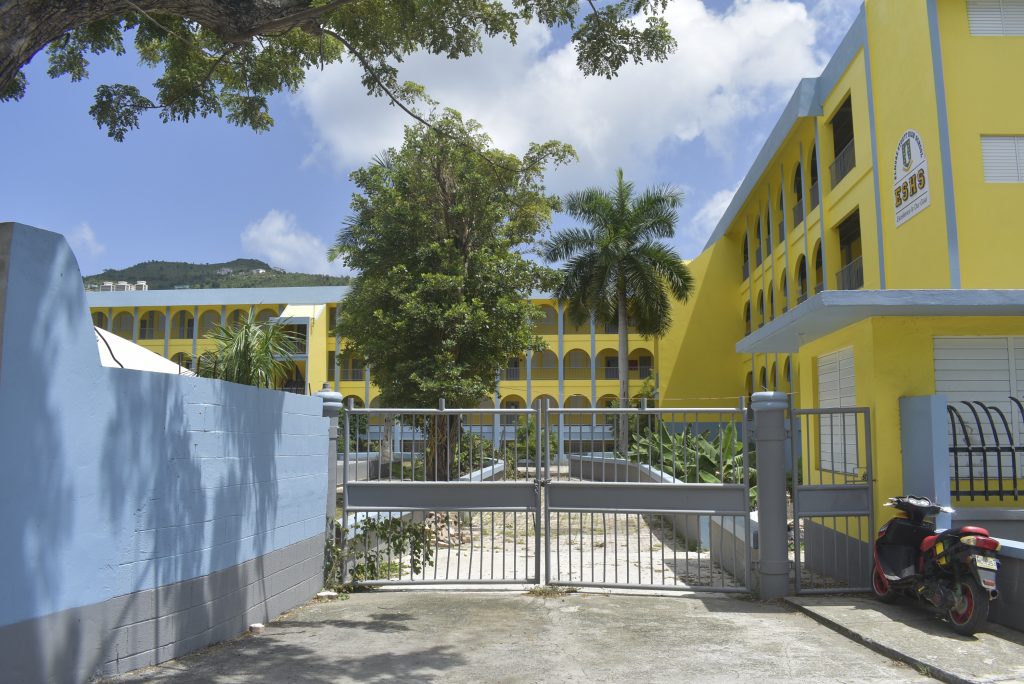 The public school year will begin on Sept. 21 with online classes, though teachers are encouraged to report to their classrooms to conduct their virtual lessons. (Photo: JOEY WALDINGER)

The public school year will open on Monday, but students won’t go back to school.

Instead, they should expect to learn from home for the rest of the year as part of the government’s ongoing measures to prevent the spread of Covid-19 in the territory, according to education officials.

For others, teachers are expected to prepare packets containing worksheets and other materials that parents will pick up from school every Friday.

The ministry is also instituting efforts to make technological resources more available, including a “loan to own” programme which allows students to make partial payments on a device until it is entirely paid off, explained Dr. Wheatley, who is also the minister of education, culture, youth affairs, fisheries and agriculture.

However, a shipment of 500 laptops for needy students — which was approved in May after Cabinet waived the tender process and awarded a $138,000 no-bid contract to Infinite Solutions — is currently delayed due to soaring demand resulting from the coronavirus pandemic, according to the minister.

While teachers can get permission to work from home if they choose, they are encouraged to conduct their lessons from the classroom and take advantage of their school’s internet service and other educational tools, he added.

Orientation for the new school year began on Monday and will end tomorrow, though parents will be notified about specific dates and are welcome to contact their child’s school for more information, Dr. Wheatley said.

“It was our greatest desire in the ministry that we would have been back on school campuses for this new school year,” he added. “However, we are beginning the school year at a time when several active cases of the dreaded coronavirus are in the territory.”

During the new school year, repairs to buildings damaged by the 2017 hurricanes will continue while the government forges ahead on plans to rebuild facilities that were destroyed completely, according to Dr. Wheatley.

At the Bregado Flax Educational Centre on Virgin Gorda, new windows and doors are being installed, while a ramp for people with disabilities and a new outdoor stairway are under construction, the minister stated.

However, as a result of the reduced ferry service and new curfew hours, some works at the BFEC have slowed, and the original project completion date of December has been scrapped, he added.

On Jost Van Dyke, education officials are zeroing in on a location for the new school building, “and the finalisation of the funding arrangements to contract an architect and engineer is at an advanced stage, so we are moving another step closer to advancing this project,” Dr. Wheatley said.

He added, “The architect for the new Eslyn Henley Richiez Learning Centre was contracted and the preliminary design was submitted.”

The school is set to be located directly behind the Althea Scatliffe Primary School pending a decision from Cabinet, he added.

Dr. Wheatley also announced that the Recovery and Development Agency has helped secure assistance from Seattle-based non-profit construction company Construction for Change in drafting a master plan for the long-awaited new Elmore Stoutt High School, though he did not provide further details.

Other new developments for the coming school year include an updated code of student conduct and discipline policy, Dr. Wheatley said.

According to the minister, these new guidelines, which were the product of a UNICEF-funded review of the previous discipline policy and code of conduct, put a greater focus on “positive and student-centred forms of discipline.”

The review “showed our strengths, … such as the great efforts we have made with ongoing professional development to improve teacher and administrator quality, growth and development in the areas of early childhood and special education, and the use of technology in the classroom,” Dr. Wheatley stated.

But it also showed that “more work has to be done to achieve the standards of 21st Century excellence that are required,” standards the minister said he hopes to hit by better accommodating “all types of learners” and “facilitating the marginalised and special needs.”

With the Virgin Islands Literacy Programme now in its second year, schools that have been able to test their students’ reading and writing capabilities generally recorded steady improvement, while “some schools exhibited outstanding results with students reading beyond their grade level,” Dr. Wheatley explained.

The programme is now being expanded to include grade four students, according to the minister. Meanwhile, the ministry is undertaking a review of the mathematics curriculum, as students still struggle noticeably in this area, Dr. Wheatley added.

To ensure that all VI students are being adequately schooled in the territory’s history and traditions, the Department of Culture this year will send out surveys and questionnaires, and conduct interviews to gain a full picture of the extent to which VI heritage is taught throughout the education system.

“It is always good to be scientific in our methods and assess the nature of a problem before implementing solutions,” Dr. Wheatley said.

As parents interested in homeschooling have to submit an educational plan to the chief education officer prior to the start of the semester, home-schooling is not open to parents who have not already been approved by the CEO, Dr. Wheatley said.

However, “the subject of homeschooling will be further fleshed out in our education communications strategy for this school year,” he added.