The online work permit system at the Department of Labour and Workforce Development has gone offline indefinitely, according to a government bulletin released on Monday. The announcement came amid an …

END_OF_DOCUMENT_TOKEN_TO_BE_REPLACED 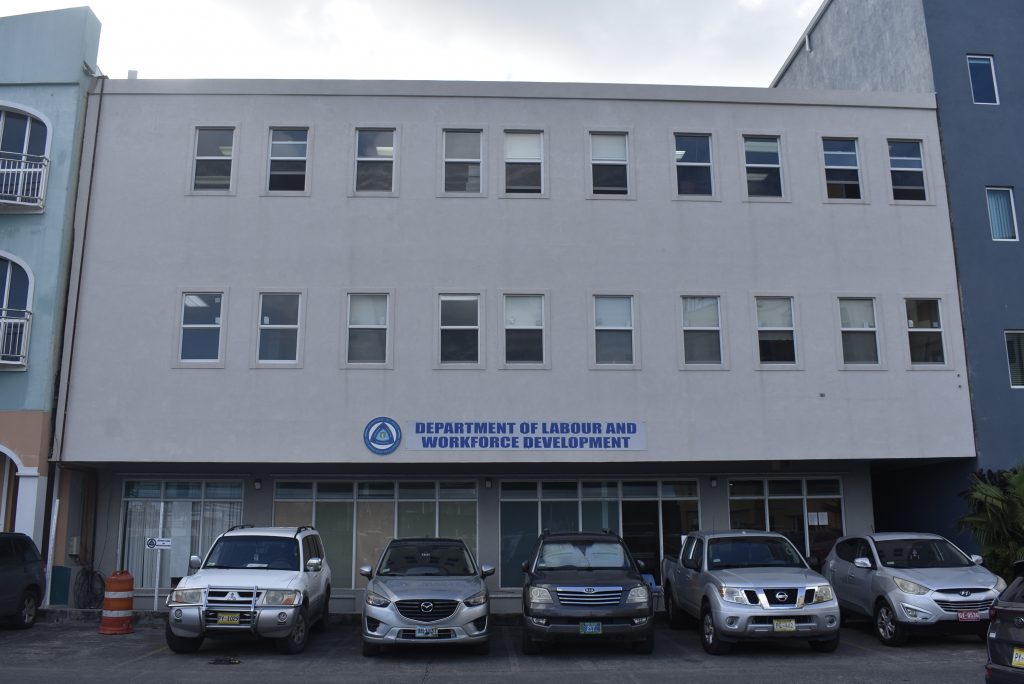 Natural Resources, Labour and Immigration Minister Vincent Wheatley said the Department of Labour and Workforce Development has halted the use of the online work permit system amid a major application backlog. He spoke during a virtual stakeholder meeting last Thursday. (Photo: JOEY WALDINGER)

The online work permit system at the Department of Labour and Workforce Development has gone offline indefinitely, according to a government bulletin released on Monday.

The announcement came amid an uproar about a backlog of more than 2,000 applications exacerbating labour shortages as the economy struggles to recover from the pandemic-related slowdown.

“Online processing of work permits is on hold,” the bulletin noted, stating that the department is only accepting hard copy applications for new applications and renewals “while the system is being rectified to ensure efficient and effective online services.”

The much-anticipated online system was finally rolled out last July and billed as the vanguard of the public sector’s digital transformation.

Initially, it accepted applications for new permits and renewals alike. However, in December, it stopped accepting renewals, requiring them to be submitted via hard copy instead.

And as of this week it is no longer accepting applications for new permits either.

At a virtual stakeholder meeting held last Thursday to address such issues, Natural Resources, Labour and Immigration Minister Vincent Wheatley foreshadowed the move, saying he was prepared to temporarily halt the use of the online system to help the backlog.

He added that it had been suggested that “maybe we should remove it altogether and get it out of the way until we get the system fully configured and properly done. I say I am prepared to take that suggestion very seriously. If that is causing the main problem of the backlog and choking off and so forth, then let us do it.”

During the meeting, Acting Labour Commissioner Michelle McLean said 5,466 applications had been received through the online system — 3,546 of which were renewals.

“Presently, we have about 2,064 renewal or new applications in the system to be processed,” she added. “In December, due to certain technical follies of the system, which cause the staff to be working harder and not smarter, the decision was made to allow only new work permit applications to be submitted via the system.”

The applications already in the system will continue to be processed, she said.

Efforts to digitise the work permit system date back at least to 2015, but they have faced repeated setbacks.

Although online applicants still had to pay in person, the system was expected to cut down the number of in-person visits to the department and free up staff.

However, according to officials, the system launched amid a major Covid-19 spike that led to staffing shortages, and problems with the system have resulted in processing times that are longer, not shorter.

As a result, the private sector is now crying out for a solution.

“When the system was launched in July, firstly, the department had been closed down for a few days and persons may have been working from home due to Covid, so therefore that creates a paper backlog,” she said.

When the system launched, she added, “technical difficulties” created a further backlog.

“Now we have asked for renewals to be submitted by paper copy, so we are now working on getting those out of the system,” she said.

Ms. McLean added that uploaded information sometimes disappears from the system and staff must physically print every paper that is submitted.

Processing times for new work permits have stretched from what she said is the standard 14 days to “over a month,” she added.

However, some stakeholders, including those in the marine and hospitality sectors, said during the meeting that they had employees who had been waiting longer than that.

Ms. McLean said the volume of applications has made processing time longer.

“We have had the marine sector ask to expedite: Sometimes it could be up to 30 work permits in one day. That created a problem because there were persons who were in the system from before,” she said.

Furthermore, in describing the process for new work permits, Ms. McLean said all must go through the Workforce Development Unit “to determine if there are any suitable qualified BVIslanders or belongers in our applicants.”

“For this reason, we have continuously advised employers to submit the job descriptions and job advertisements to the department before submitting the work permit applications, as it will also help to expedite the process,” she said.

However, even as the Covid spike subsides in the territory, the staffing issues remain ongoing at the department. During the meeting, Mr. Wheatley blamed the continued shortage in part on the Deputy Governor’s Office.

“We’ve been in constant dialogue begging, pleading and asking, ‘Please give us staff at Labour. The industry is hurting. We need staff,’” he said. “However, I cannot assign a single person to Labour. That duty of the public service and its composition is square at the governor and deputy governor’s feet. We can only beg and plead and complain.”

NRLI Ministry Permanent Secretary Joseph Smith-Abbott said during the meeting that he had “identified and brought a few individuals of various public services into Labour to provide some temporary assistance.”

He added, “We have two or three officers who are in the department that currently can render assistance to customers. I know that we have plans to augment another one.”

Additionally, she said, there’s only one labour inspector currently working on Tortola.

During the meeting, stakeholders proposed several solutions for coping with the backlog, including implementing three-year work permits and expediting permits in certain key industries, such as hospitality.

Although officials said both solutions are under consideration, they added that they come with their own drawbacks.

Putting more staff into expediting hospitality permits, for instance, will pull them away from processing permits that are already submitted and waiting, Ms. McLean said.

Regarding three-year permits, the acting commissioner said a provision in the Labour Code already exists for them. However, both she and Mr. Wheatley said they are hesitant to implement them across the board.

“Doing so would place BVIslanders/belongers at a disadvantage,” she said. “You would appoint somebody with a three-year work permit and a BVIslander/belonger may want to come home. They desire to go into another job and because of that, they are unable to.”

However, in the short term, Mr. Wheatley said, “If somebody is going to get a two-year permit or you decide a certain number gets two years, it’s going to cut down on the congestion in the office for next year.”

Stakeholder Sinclair Fleming suggested that using online resources such as Facebook to advertise jobs rather than only newspaper websites could expedite the process.

“Let me ask you: If I was to ask you to give me some information, but you said you can only give me the information in a hard-backed book, would that seem like the most efficient thing to do when Google is right at your fingertips?” he asked.

Another suggestion was issuing temporary permits to bring new workers to the territory while waiting for permanent permits.

Although Ms. McLean suggested that practice would be “circumventing the system,” Mr. Wheatley said he would take the idea under advertisement.