Though $15 million has been drawn down from the $65 million Caribbean Development Bank rehabilitation and reconstruction loan, only about $2.4 million worth of initiatives have been formally charged to …

END_OF_DOCUMENT_TOKEN_TO_BE_REPLACED 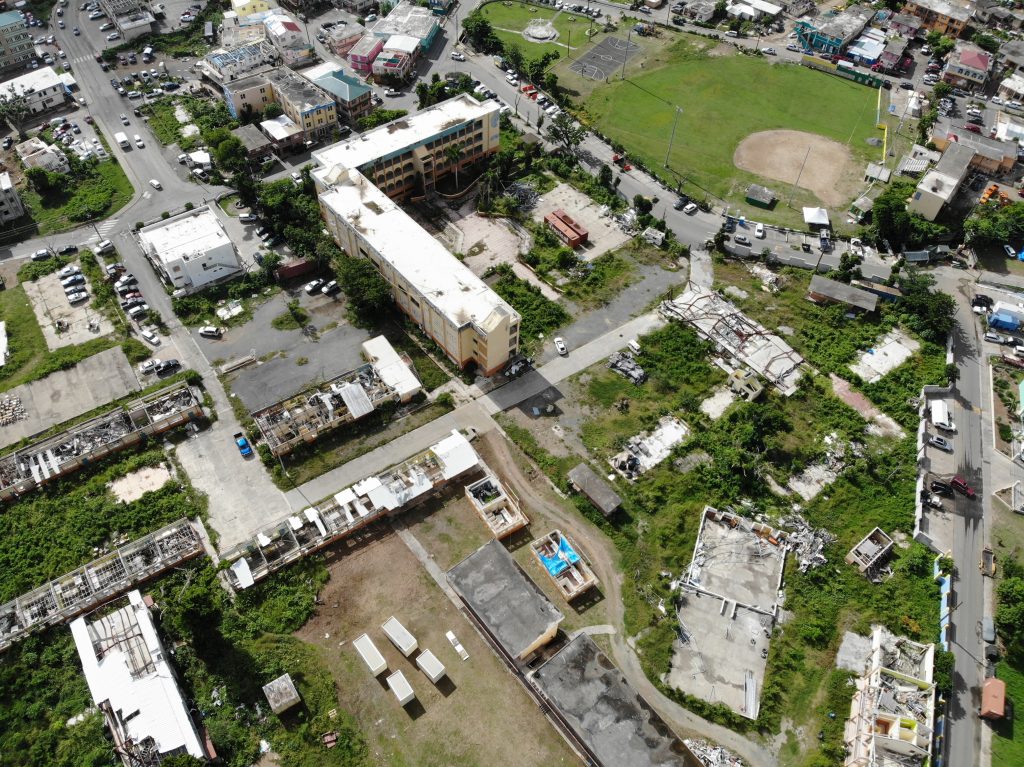 High school students have been attending classes in a shift system in a cramped building and under tents since the Elmore Stoutt High School was damaged by the storms. Dr. Rubaine said the conditions present a daily reminder that life has not returned to normal, she added.(Photo: FREEMAN ROGERS)

Though $15 million has been drawn down from the $65 million Caribbean Development Bank rehabilitation and reconstruction loan, only about $2.4 million worth of initiatives have been formally charged to the loan to date, Premier Dr. Orlando Smith disclosed during a House of Assembly sitting this month.

Meanwhile, several infrastructure projects throughout the territory have not begun or been priced. And of the six projects that Dr. Smith mentioned and provided a contract value for during the Dec. 13 HOA sitting, most were consultancies.

A $1,242,517.50 million contract was signed on April 12 for the provision of “technical assistance” from the United Nations Development Programme, the premier explained, and a $468,671.50 contract was signed on July 24 to provide architectural engineering, project management and contract administration for the new National Emergency Operations Centre.

Other consultancy projects include a $354,088 contract for the provision of psychosocial support to be delivered by the Pan American Health Organisation, and a $140,000 contract to develop the technical specifications and to undertake procurement and contract administration of a CCTV network installation, Dr. Smith said.

As for projects that involve the supply of goods, an October contract worth $99,894.60 will supply teachers with math books and workbooks for kindergarten through sixth grade, and vehicles that are to be assigned to the Department of Disaster Management cost $26,500 from Burke’s Garage Ltd. and $45,600 from Legacy Auto Sales.

Former Opposition Leader Andrew Fahie grilled the premier and other legislators on particulars of the CDB loan during last week’s sitting.

After Dr. Smith read a long list of other projects that will eventually also be charged to the $15 million worth of drawn-down CDB funds — including consultancies for information and communications technology for schools, offices and the courts; roads, slopes and coastal defence; and various government buildings — Mr. Fahie questioned how all of those projects would be funded with what’s left of the $15 million.

“Many of them, Madam Speaker, are consultancies and not the actual particular carrying out of projects, and so it would not cost as much,” the premier responded.

“So most of this money is in consultancy?” Mr. Fahie clarified, shooting a look around the room to other lawmakers. “You don’t say.”

Dr. Smith also reported that government has already paid about $464,000 in interest on the drawn-down funds.

“Is the premier of this country telling us that one year after getting a $65 million loan, taxpayers have already paid back $464,116.99 in interest [but] have not received a thing from it other than $5 million in consultants?” Mr. Fahie asked, apparently referring to the $2.4 million worth of projects that have already been charged.

The premier admitted that there have been unforeseen delays in the loan process, though originally there was “an indication” from “all sides” that government was ready to access the money and execute projects.

“However, Madam Speaker, the CDB processes are quite involved and quite prolonged and they took quite a few months — many months — before the process could be completed to have some of these monies spent,” he said. “I was not anticipating the process would take that long.”

Dr. Smith assured the House that there have been meetings held with the CDB board to discuss ways to shorten the process. Most projects are in an “advanced stage of planning,” he added.

Mr. Fahie asked if government has any kind of priority list for the many uncompleted projects that were broadly outlined by the premier.

“It cannot be that this is a spin the wheel and whichever one comes out we’re gonna go [with]. It must have some kind of order somewhere,” Mr. Fahie said.

The premier said he didn’t have the priority list with him — implying that one does exist — but that he expects the projects will be completed in a “very expedite manner.”

Later in the sitting, Mr. Fahie turned his attention to Education and Culture Minister Myron Walwyn and the current state of Elmore Stoutt High School. More than a year after Hurricane Irma, the school remains largely unoccupied and heavily damaged.

Mr. Walwyn, in turn, provided a long explanation for the school’s present condition.

Though the CDB loan was approved in December 2017, the L-shaped ESHS building wasn’t initially included in the loan’s breakdown of projects, Mr. Walwyn said. Instead, it had been his ministry’s intention to have the building repaired with local government funding that would be later recovered from the loan.

In March, the ministry sent a memorandum to Financial Secretary Glenroy Forbes, requesting that the building be included in the loan package.

Now, after having a conversation with the Project Unit in the Ministry of Finance, Mr. Walwyn said he expects that the school will be ready within the first term of the next academic year.

Despite the education minister’s rationale, Mr. Fahie said more could be done at the school.

“I understand all of that, Madam Speaker, but, minister, you recall that you gave us different dates when this Elmore Stoutt High School is gonna be ready. … That L-shaped building — while I’m not an engineer — a year and change gone. It wouldn’t take much to get something done there. We gotta get these children back off the street,” he said.

“I wouldn’t give dates on something unless I was advised. … But of course these things are not an exact science and your concern as it relates to getting the Elmore Stoutt High School — and not just ESHS but Bregado Flax Educational Centre — sorted out is a headache for me every day,” he said.

In September, government announced in a press release that it had received nine proposals for contracts involving the reconstruction of critical infrastructure that would be funded by the CDB loan. The Central Tenders Board said it had also received other proposals for various projects.

The press release did not, however, detail which businesses submitted proposals, the amount of each proposal, or a timeline for the selection of certain proposals.