Opposition calls for a Biwater  inquiry

END_OF_DOCUMENT_TOKEN_TO_BE_REPLACED 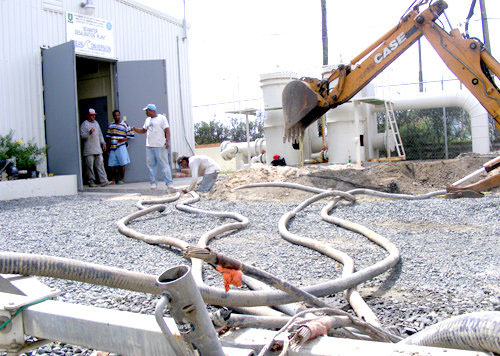 The move came one week after details surfaced of a $6 million deal to buy a generator through a Biwater affiliate months before government signed a water purchase agreement with the company in February.

“I have seen enough to say, at this point in time, that I think the time has come for an inquiry into the whole relationship of our government with this Biwater,” Dr. Pickering said. “I think there is enough now that is disconcerting, that is troubling, and, as I said, that is very weighty in its nature, that there needs to be an official inquiry.”

Details of the purchase first emerged on June 14 when a caller to the Virgin Islands Party radio programme “Let’s Talk” questioned Communications and Works Minister Julian Fraser and Premier Ralph O’Neal about the issue.

Originally, Mr. Fraser deflected questions about the new generator, but he later explained that government paid the Biwater affiliate an instalment of more than $2 million in late 2009, because the BVI Electricity Corporation “needed more capacity.”

Later in the show, the minister explained that the BVIEC’s current provider was unable to provide an engine to the corporation within the six-month window the Biwater contract required.

But on this week’s NDP radio programme, Dr. Pickering questioned the process by which government acquired the generator.

“Unless I missed it, during the recent deliberations of the Standing Finance Committee, I do not recall anywhere in the process where monies were obviously allocated for the purchase of these engines,” he said, questioning whether money was drawn from the IPOC fund. “There are further questions with the way it was done, with the way the money was ordered to be paid.”

Yesterday, the premier said he was unaware of the NDP’s call for an inquiry into the Biwater contract. Governor David Pearey said that nothing had “passed his desk” in relation to an investigation of the BVIEC or the generator deal.

If government or the opposition does move for a formal inquiry into the Biwater deal, Dr. Pickering said the auditor general would be called on to determine whether the Public Accounts Committee is the proper vehicle.

“There does seem to be a need,” he said, adding, “There are so many questions surrounding the Biwater contract that remain unanswered and need to be looked into.”

Speaking on Monday’s radio show, Dr. Smith also called on government to justify some of its recent decisions surrounding the controversial water deal.

“We all believe it was one-sided, and we were not happy with that contract going for 25 years, and we were not happy that we were giving away our water rights to foreigners, just like that, when it was not necessary, when we could have negotiated with local people who are involved in the production of water,” he said.

The opposition has sided with existing water provider Ocean Conversion-BVI, maintaining that the company, which is majority-owned by VIslanders, was not given a fair chance to compete for the water contract.

Dr. Smith added that the revelations about the new engines add to the concerns.

“We also understand that this was done before there was even a contract for Biwater to produce water for the territory,” Dr. Smith said.

Messrs. O’Neal and Fraser have strongly defended the Biwater contract in the past, insisting that it is the best solution to the territory’s ongoing water and sewerage woes, and claiming that OC-BVI has long overcharged VI residents for water.