The opposition gave a press conference on Monday in which they criticised the fact that the budget debate on Friday initially proceeded without most opposition members present, although it later …

END_OF_DOCUMENT_TOKEN_TO_BE_REPLACED 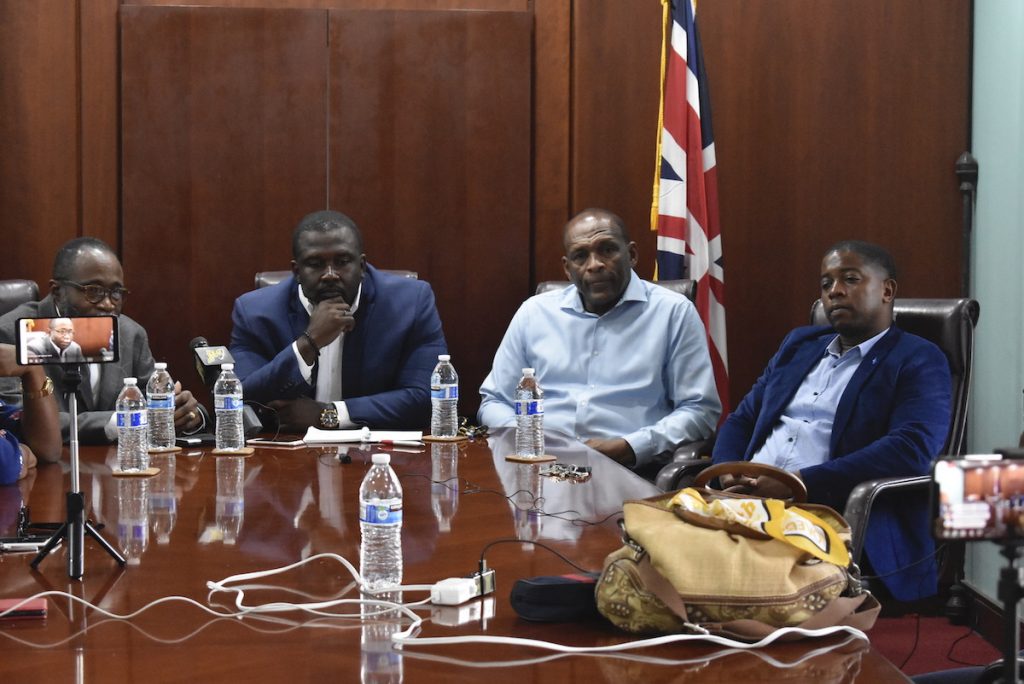 Opposition members gave a press conference in which they claimed that Speaker of the House Julian Willock deliberately tried to exclude them from the budget debate. (Photo: ZARRIN TASNIM AHMED)

The opposition gave a press conference on Monday in which they criticised the fact that the budget debate on Friday initially proceeded without most opposition members present, although it later continued as normal.

“I think there’s a perception out there that … somehow we as the opposition abdicated our responsibility to participate and participate fully in the process,” Opposition Leader Marlon Penn said.

He explained that he wanted to dispel the notion that opposition members were not living up to their duties, when in fact he said they had been as involved in the budget process as possible, including helping to ensure a quorum.

The original debate was scheduled last Thursday, when Mr. Penn said members waited for three and a half hours for the Cabinet and the speaker before deciding to hold the debate the following day at 10 a.m. because the Standing Finance Committee report would not be available until 7 p.m.

After Premier Andrew Fahie made his opening remarks in the budget debate on Friday morning, Speaker of the House Julian Willock asked if anyone would like to respond, to which no one replied, and the House moved into committee for nearly two hours.

Mr. Penn said he called Mr. Willock around 9 a.m. asking him to delay the sitting to 11 a.m. because of a medical emergency, and thus he felt the House should have moved into recess to accommodate the delay.

Mr. Penn said that when he and fellow opposition members Julian Fraser (R-D3) and Mark Vanterpool (R-D4) arrived, the House had already moved into committee, and they had a debate with Messrs. Fahie and Willock about restarting the debate process, which Mr. Willock refused to do.

Mr. Penn felt it was necessary that all five members of the opposition be represented in the budget debate.

“This was unheard of where the opposition was not given a chance to be able to have their voice heard in the process,” he said.

Mr. Penn said the fact that the process started at 10:50 a.m., just before he said he arrived at 11 a.m. “sharp” made the opposition “wary of what the intent was — if it was intended to shut us out of the budget process.”

He subsequently had a discussion with Mr. Fahie in which they decided to move forward with the debate, which is when it resumed, he said.

“It’s not only the opposition who should debate the budget. The ministers, especially in government, should explain what the budget is about as relates to their ministries. And backbenchers need to be involved also,” Mr. Penn said.

“So to open a budget debate on Friday and close it immediately without the ministers elucidating what the budget speaks to for the ministries really suggests that there was something sinister because the public would not have heard if we didn’t take the stance we took.”

Mr. Fraser also took issue with the fact that the opposition did not receive the SFC report until last Thursday evening, giving them insufficient time to prepare for the budget debate. He went on to claim that passing a budget without a debate would have made the VI look bad on the international stage.

“I think that people have to understand the gravity of our budget,” he said. “A $414 million budget, you can’t just pass that as if it was something you did by night in the cover of dark.”

Opposition member Alvera Maduro-Caines (R-D6) said that in her eight years in elected office, she had never seen a similar occurrence.

Mr. Penn called Mr. Willock’s move a “rookie mistake” and said he acted in “bad taste.” He recalled that when he spoke to him on the phone Mr. Willock said he would communicate the delay to the rest of the House, which Mr. Penn said he didn’t do.

“I believe the premier, if he knew that, he would have not allowed that to happen,” Mr. Penn said. “I have to say that, because I don’t see him being so irrational or irresponsible in the process.”

Mr. Willock declined to comment on the opposition’s complaints.