In keeping with their promise to host monthly discussions with the media and the public, opposition members hosted a press conference on Sept. 30 where they distanced themselves from Premier …

END_OF_DOCUMENT_TOKEN_TO_BE_REPLACED 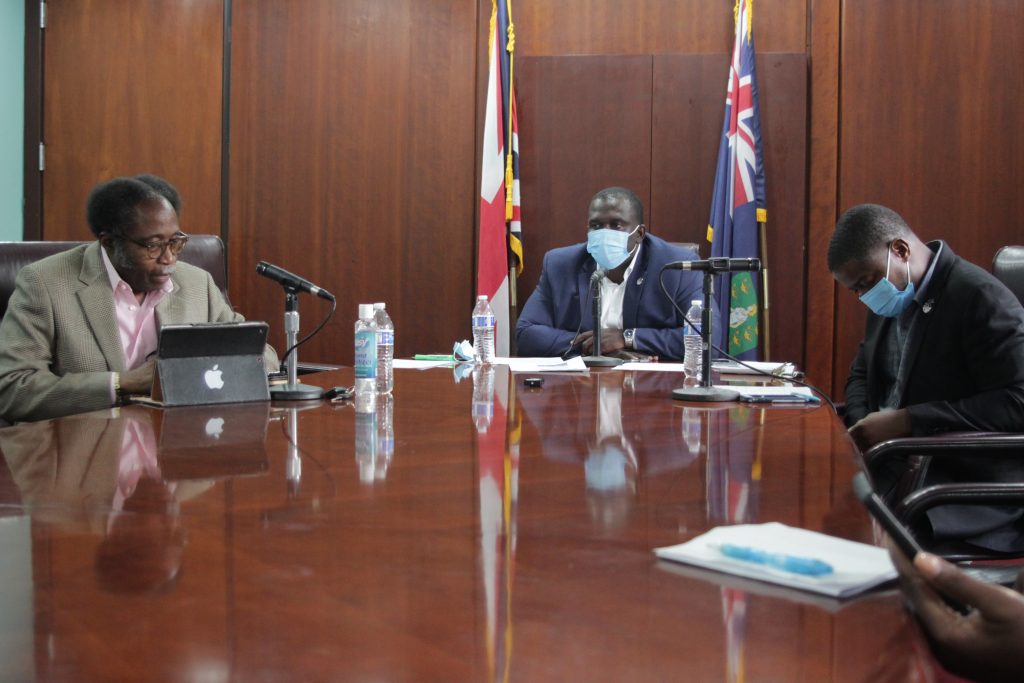 In keeping with their promise to host monthly discussions with the media and the public, opposition members hosted a press conference on Sept. 30 where they distanced themselves from Premier Andrew Fahie’s recent letter to the United Kingdom on border security, criticised ambiguity in Mr. Fahie’s latest announcement on public company registers, and urged government to create a plan for reopening the tourism sector.

“The people of the territory need to clearly understand what was the commitment made to the United Kingdom, how that impacts our industry overall, what is the overall position of the industry on this topic, how does this impact our economy in a time when financial services has seen declines in revenues as an impact of Covid-19,” he said.

Mr. Penn added that he is concerned that the premier is “using financial services” to make “unilateral” decisions without discussions from the public.

He added that strained relations between the premier and the governor have been exacerbated by Mr. Fahie’s recent letter to UK Overseas Territories Minister Baronness Liz Sugg regarding border security (see page four).

“We’ve always pushed for a comprehensive approach, a comprehensive plan for pushing the territory forward,” he said. “We did this as early as May 18, when we put out the first draft of economic recovery and stimulus plan.”

Members of the opposition began hosting press conferences regarding government’s response to Covid-19 in mid-March, when they urged government to restrict mass gatherings, close schools, and increase broadband speeds to facilitate remote work and education.

Two months later, the opposition members openly criticised government for delaying an economic stimulus package, and they proposed a plan of their own that included a reopening date for tourism on Sept. 1.

However, the premier pushed back strongly against this idea, stating that reopening the borders without proper control measures would place the territory at risk.

Last week, Mr. Penn stated that enough time had passed for government to put in place a plan for reopening tourism by now.

“We’re six to seven months removed from that initial lockdown period. We’re hearing that we have an opening date on Dec. 1,” Mr. Penn said. “I am concerned about the fact that we don’t have a plan that outlines what will happen.”

Mitch Turnbull (R-D2) spoke up for the island of Jost Van Dyke, which he represents, in demanding a layout for the reopening of the tourism industry.

“The Second and the Ninth district are the tourism hubs of the VI,” he said. “The entire island of Jost Van Dyke is tourism-driven. … Where is the plan? Where have you engaged the business community so that they can understand seven months of closing down the tourism industry?”

He asked for proof of a plan and involvement with the industry, claiming that there is “no evidence” but “constant chatter.”

“What is the vision? How are we going to receive these guests? People are wanting to book,” he said.

He added that he fears government will wait until the last moment to share a plan for tourism, not allowing enough time for businesses to prepare.

“We will not be intimidated or phased by the tactics and games being played, because if you see a game, you know it’s a game, but they’ll tell you it’s not a game,” Mr. Turnbull said.

He accused the premier of “duplicity” and saying one thing in the “public eye” while taking opposite action.

He also alleged that the premier hasn’t included businesses in discussions for re-opening the territory.

Mr. Penn agreed with Mr. Turnbull and criticised the premier’s behaviour towards him, other members of the House of Assembly, the governor, and Ms. Slugg.

“This type of schoolyard bullying type of behaviour is not becoming of the leader of government business,” he said. “Because we disagreed with his position, he called me a house slave.”

The opposition leader promised opposition members would not keep quiet, and would continue to voice the concerns of the people they were elected to represent.

Julian Fraser (R-D3) also attended the press conference, and spoke at length about the premier’s letter to Ms. Sugg.

The fourth opposition member, Mark Vanterpool (R-D4), did not attend.