The day after the government hosted a more-than-three-hour-long Covid-19 press conference last week, opposition members voiced their concerns about leaders’ recent decisions, calling on them to present a detailed plan …

END_OF_DOCUMENT_TOKEN_TO_BE_REPLACED 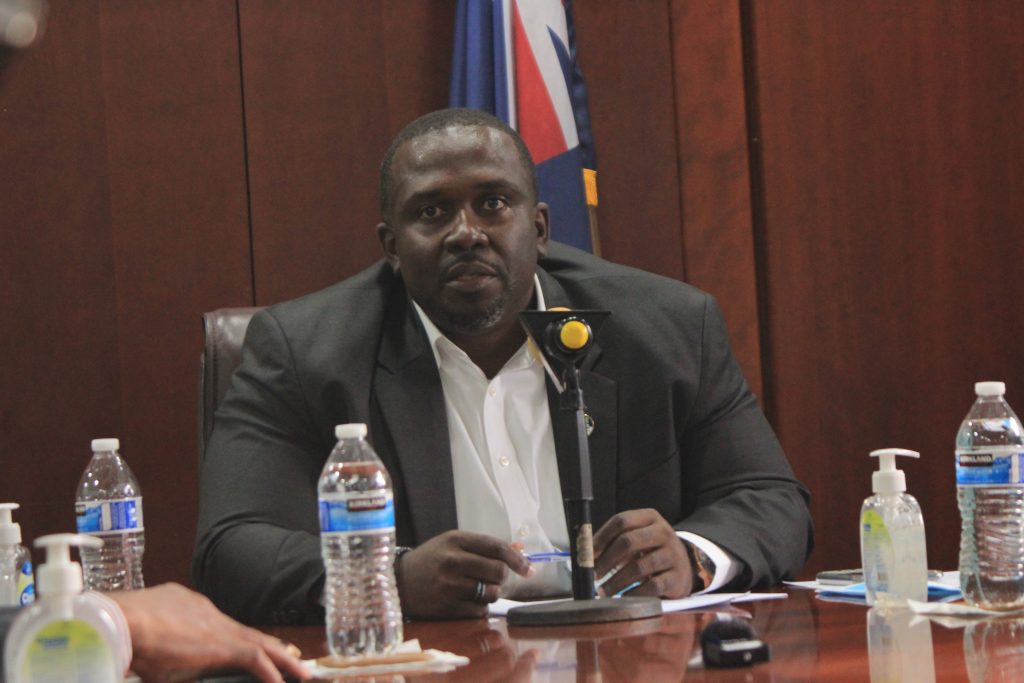 Opposition Leader Marlon Penn hosted a press conference on Aug. 26 along with Julian Fraser (R-D3) and Mitch Turnbull (R-D2) to express their concerns and opinions over government’s response to the pandemic. (Photo: ZARRIN TASNIM AHMED)

The day after the government hosted a more-than-three-hour-long Covid-19 press conference last week, opposition members voiced their concerns about leaders’ recent decisions, calling on them to present a detailed plan for handling the pandemic and its economic impacts.

“We’re still concerned that there is not a solid plan,” Opposition Leader Marlon Penn said during an Aug. 26 press conference. “We need to have a plan in place.”

Opposition members also brought up issues including financial support for the unemployed and underemployed, border security, controversial expenditures, education, and what they described as a lack of courtesy to the public.

They also said they have yet to be presented with a plan for the government’s pandemic response. One such plan — the National Action Plan Against the Covid-19 Pandemic — was made available to the Beacon in early June, but it references at least one other general pandemic plan that has not been provided in spite of multiple requests from this newspaper.

The NAPACP recommends security and health care measures the territory should take as the pandemic progresses, but it lacks details about many topics residents have asked about frequently, including lockdown protocols, border control, and comprehensive actions towards economic recovery.

Mr. Penn said opposition members have spoken to people who have lost their jobs as a result of the pandemic.

Some of them, he claimed, have been unemployed for more than six months, and many struggle to maintain their quality of life and need support in paying bills.

“It’s an important aspect of this process to get the necessary financial support to the people that need it the most. The process has failed,” he said, referring to a $62.9 million stimulus package that government announced in late May, much of which has been delayed. “We are now in August going into September and people are still waiting. We must ensure whatever plan we have going forward includes businesses and stakeholders.”

Mr. Penn added that opposition members have had only one meeting with the Health Emergency Operations Centre.

“We had conversations through the HEOC, which is the body that is responsible for the pandemic [response]. We had one meeting,” he said. “I guess we ask too many questions. We weren’t invited back.”

But the “crux” of his discussion during the press conference, he said, focused on the absence of a detailed plan.

“In the absence of a plan there is always these knee-jerk decisions,” he said.

One such decision, he claimed, was bringing in Cuban medical personnel.

Mr. Turnbull said opposition members spoke to local doctors and were told that they were “having to work twice as hard because they’re unable to communicate” with the Cubans, who he claimed don’t speak English.

“We have a problem with education,” he said. “There are those who are still left out, who still struggle, who still need that extra attention.”

He worried that those students would suffer from government’s recent decision to conduct lessons online for the remainder of the year.

“Is it okay to just do the bare minimum?” he added. “We need to develop a comprehensive plan.”

Mr. Fraser acknowledged the difficulties the government faces in dealing with the pandemic, but he also called for government officials to be held accountable for questionable actions.

“There’s no blueprint as to how to go about Covid-19, so we do expect to have some hiccups and stumbles,” he said. “The matter has become more complicated than it should be.”

As an example, he pointed out that on Aug. 24 government kept the public waiting for an 8 p.m. announcement that came at nearly midnight. Mr. Fraser also questioned why the premier wasn’t present in some of last week’s announcements, and he alleged that the information provided on a new curfew order confused the public.

Additionally, he claimed that stimulus measures haven’t helped businesses remain open and retain their employees, contrasting the United States as an example where “billions were pumped into airlines” to keep the companies open and staffed.

“It’s irresponsible for the government not to report to the public exactly what the economic situation is,” he said. “What are our plans to get the economy back up and running?”