Opposition weighs in on loan guarantee

While Premier Andrew Fahie visited London this week following a public spat with United Kingdom officials, opposition members launched a series of community meetings and pushed back against Mr. Fahie’s …

END_OF_DOCUMENT_TOKEN_TO_BE_REPLACED 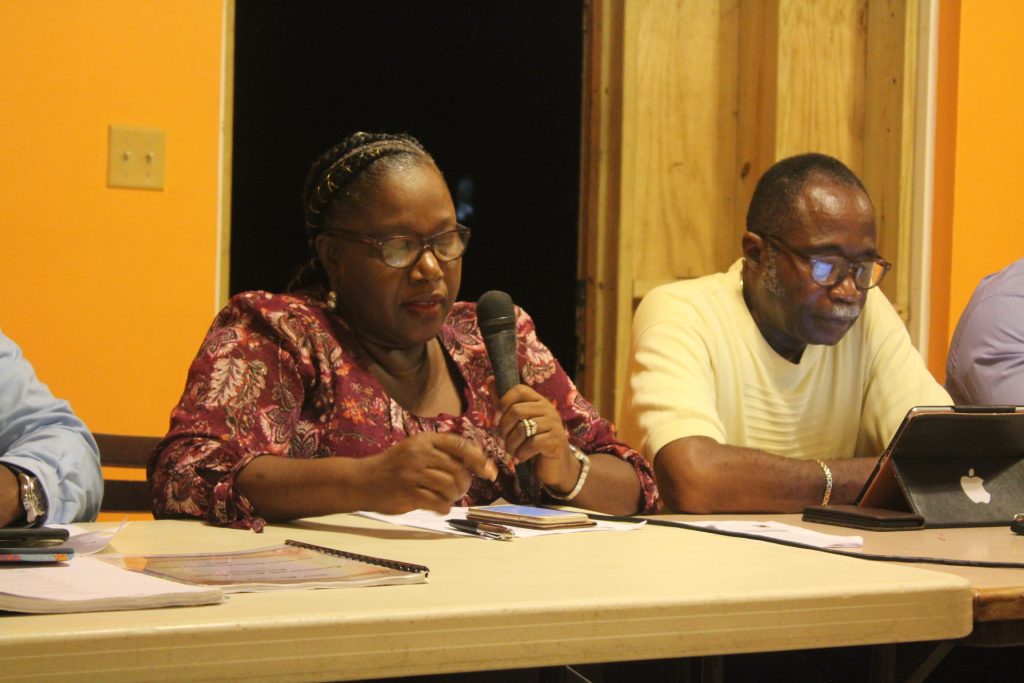 While Premier Andrew Fahie visited London this week following a public spat with United Kingdom officials, opposition members launched a series of community meetings and pushed back against Mr. Fahie’s recent criticism of the UK’s offer of a £300 recovery loan guarantee.

The first meeting was held on Tuesday night at the East End/Long Look Community Centre, where about two dozens people attended a nearly three-hour-long session with all five opposition members.

The Virgin Islands-UK relationship and the loan guarantee were the main subjects of discussion as the legislators expressed their views before opening the floor to attendees.

“Now where we are in this critical stage in our country, we must find a way forward to help develop, recover and rebuild this territory, and it can’t happen fighting a fight with the United Kingdom when we are still in fact a dependent territory,” said Second District Representative Mitch Turnbull.

Opposition Leader Marlon Penn described the territory’s political climate as having “looming clouds with the potential to cause damage to the economy.”

The premier has implied that he might turn down the loan guarantee because of the conditions attached to it, but Mr. Penn said that the territory needs money: Of the government’s $361 million budget for the 2019 fiscal year, two-thirds goes toward operating costs, he explained.

“That means we’d have $22 million for redevelopment,” he said. “Do we want to develop at the rate of, say, $15 million each year, or we have to borrow. How we do that has to be an open discussion.”

All told, the public-sector recovery cost has been estimated at $721 million.

“We need strategic partners,” Mr. Penn said, adding, “It only takes one misstep.”

He also expressed concern about the “unprecedented” back-and-forth between Mr. Fahie and Ben Merrick, the Foreign and Commonwealth Office’s director of overseas territories, who last week published his response to Mr. Fahie’s claims. In a letter to the premier, Mr. Merrick set an ultimatum for the government to decide whether to accept the loan guarantee offer and its conditions by the end of the month.

RDA ‘not a bad thing’

Also at the Tuesday meeting, opposition members countered Mr. Fahie’s recent criticisms of the Recovery and Development Agency and the VI Recovery Trust.

Mr. Fahie has complained about a section in the VI RDA Act — which the House of Assembly passed in March 2018 with his vote — that requires that all recovery funding go to the Recovery Trust and be used to fund projects administered by the RDA.

“The fund is set up in a way where politicians don’t have a hand in it,” Mr. Vanterpool said, citing examples of similar agencies set up abroad for building Olympic stadiums or for other hurricane recovery loans. “This is how it works.”

He explained that the politicians only have a say in what projects they want.

“The only thing we don’t like is that we can’t determine who gets the projects. Procurement is handled by the RDA,” he said. “The RDA is not a bad thing.”

Opposition members also acknowledged the vulnerable state of the territory as a result of concurrent major events like the 2017 storms and new requirements for the financial services industry.

Mr. Turnbull urged citizens to be aware of the implications of borrowing money at a time when financial services revenue could be in question.

On one hand, he said, the UK offer would facilitate loans at an extremely low interest rate; on the other hand, if the territory’s economy stagnates or sinks, it could have difficulties repaying any loan.

The UK guarantee, he explained, would allow the territory to borrow at two percent interest instead of the five percent or more that would otherwise be required.

He added, though, that not all of that money would be borrowed at one time: Government may decide to borrow $50 million one year and decide on what projects to complete, then borrow $25 million the next year for different projects, for example.

He also stressed the importance of transparency and openness in making decisions about the recovery. The territory is still under the jurisdiction of the UK, and that relationship must be respected, he said.

Earlier that day, Mr. Fahie issued a statement about his trip to the UK and said he was aware that the decisions made in the territory today would have “far-reaching consequences for the present and future generations of Virgin Islanders.”

“In order for our people to make the decisions that best benefit the territory, you must have all the relevant information, so that they can form informed opinions,” he stated, welcoming feedback from the community through consultation sessions that he and his party have hosted recently.

Though he did not provide specific details on his coming negotiations with the UK, he did mention some issues he planned to address.

In his statement, he stressed the importance of ownership of VI land and assured the public that the government “is taking steps to ensure that all Crown lands that are earmarked for residential use are made available to the people of the Virgin Islands.”

He added that he would use the opportunity “to discuss the granting of scholarships by the UK government for the people of the Virgin Islands in areas such as … hotel management, marine industries, medical training, and aviation.”

Though Mr. Fahie has expressed his intentions to re-negotiate the terms of the UK loan guarantee, during the discussion in East End on Tuesday opposition member Julian Fraser (R- D3) was sceptical.

Mr. Fraser read aloud sections of the VI RDA Act, and said the way Mr. Fahie hopes to change the terms will not happen. Mr. Fahie has proposed establishing a new body that would handle recovery funds and determine which amount would then be passed over to the RDA, Mr. Fraser said.