During the final days of the annual United Nations Climate Change Conference last November in Egypt, negotiators from some 200 countries forged an agreement to create a “loss-and -damage” fund …

END_OF_DOCUMENT_TOKEN_TO_BE_REPLACED 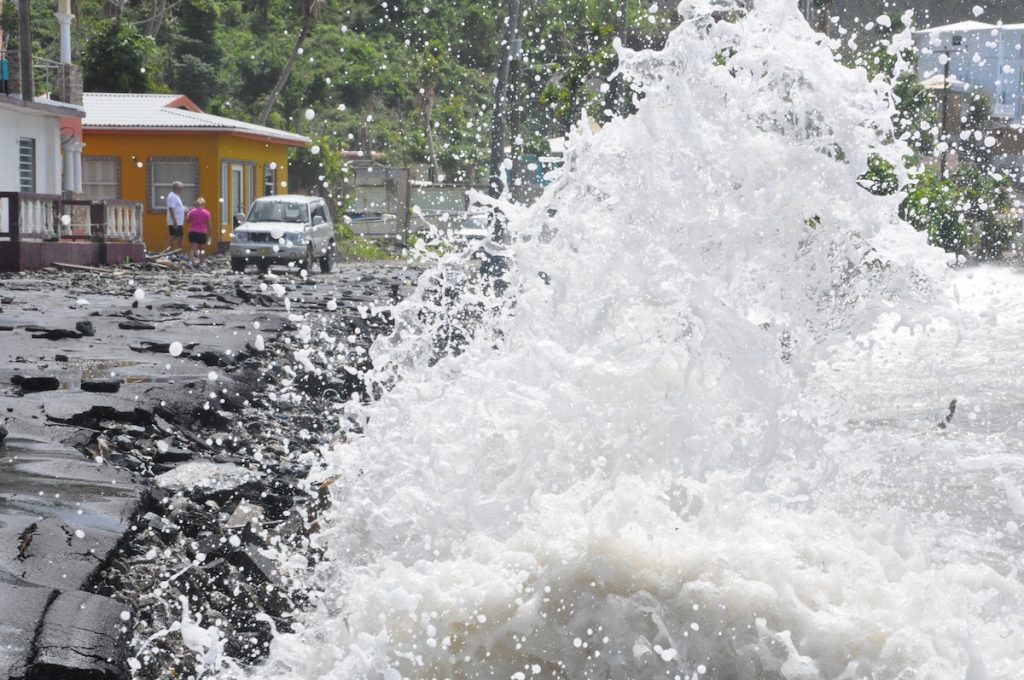 A wave batters the road in Cane Garden Bay during a major swell in March 2018. The road and shoreline have since been repaired, but rising sea levels mean that future swells are likely to come higher.(Photo: FREEMAN ROGERS)

During the final days of the annual United Nations Climate Change Conference last November in Egypt, negotiators from some 200 countries forged an agreement to create a “loss-and -damage” fund to help developing nations adapt to the adverse effects of a changing climate.

But the Virgin Islands and many other vulnerable Caribbean islands likely won’t be eligible for this aid because they are not independent countries, according to Dr. Ulric Trotz, deputy director at the Caribbean Community Climate Change Centre (CCCCC).

Instead, he suggested that the VI and other United Kingdom overseas territories should ask the UK for more financial support to address the potentially catastrophic impacts expected as the atmosphere warms and sea levels rise. “This is a matter to be pursued with the British government,” he stated, adding Brexit has exacerbated the OTs’ plight. “Now that the UK is out of Europe, climate funds that overseas territories may have accessed under the European Union umbrella are no longer available.”

Many details are still to be ironed out, but the UN has said the loss-and-damage fund will be a mechanism for developed countries to compensate developing nations for losses arising from hurricanes, droughts, floods, rising seas and other disasters associated with the atmospheric warming caused largely by the developed world’s emissions.

During the November UN conference, which was known this year as COP27, Caribbean leaders including Barbados Prime Minister Mia Mottley and Antigua and Barbuda Environment Minister Myron Joseph were among the most vocal advocates for the fund.

This advocacy was in keeping with smaller nations’ past efforts, which Dr. Trotz said have had been especially effective under the banner of the Alliance of Small Island States (AOSIS). “They have been quite effective,” he said. “Through their advocacy and insistence, there is a recognition of the need for a global 1.5 degree Centigrade warming limit in the [2015] Paris Agreement.”

He noted that the loss-and-damage agreement — which doesn’t establish the fund but sets out a roadmap for working towards it — can also be attributed in part to the “stridency and persistence of small island developing states at these international fora.”

However, non-independent states like the VI are not permitted to send negotiators to participate directly in the annual COP negotiations because they are represented instead by the UK or another home country.

Dr. Trotz noted that the UK has provided climate-change support for OTs in the past. The CCCCC, for instance, obtained funding from the UK to implement the project “Enhancing Climate Change Adaptation in the Caribbean” in certain OTs between 2007 and 2011. Through the UK’s then-Department for International Development, the project was implemented in the VI, Anguilla, the Cayman Islands, Montserrat, and the Turks and Caicos Islands.

Dr. Trotz said the project was successfully implemented, and the OTs now all have national adaptation plans and are well aware of the threats that climate change poses to their well-being and developmental aspirations.

But in the VI, the project has had mixed results after the implementation phase. Ten years ago, the effort led to the Cabinet’s 2012 adoption of the VI Climate Change Adaptation Policy, which committed the government to dozens of specific deadlines for measures that in many cases had been promised for decades. The great majority of the deadlines, however, were missed, and a five-year review scheduled for 2017 still has not taken place.

Another outcome of the OT project came in 2015, when the VI became the first in the region to adopt a legal framework for a climate change trust fund overseen by an independent board. An eco-levy followed in 2017, with officials promising that a portion of the $10 collected from each non-cruise-ship tourist would go directly to the trust fund.

This money, however, never reached the fund, and after the trust fund board was appointed in 2017 members had to donate their own money for the operational expenses needed to get to work.

Despite this effort, the members were removed without explanation by former Premier Andrew Fahie’s government in 2019. The eco-levy money, meanwhile, remains untapped for reasons that still have not been clearly explained. Following harsh criticism of such delays by the Commission of Inquiry, Natural Resources and Labour Minister Mitch Turnbull apologised to the former board members last July and invited them to return to their positions.

Dr. Trotz said measures like the adaptation plan and the trust fund are extremely important in island nations, which are especially vulnerable to a wide range of climate-change effects: changing weather patterns affecting agriculture and food security; warming seas leading to intensification of hurricanes and bleaching of coral reefs; sea level rise leading to coastal erosion and inundation of lowlying coasts; and saltwater intrusion into aquifers, among others.

“All in all, negative impacts [can be expected] on food security; health, including heat stress, respiratory ailments, dengue, malaria; water; tourism; coastal infrastructure; and the development programmes of countries in the region,” he said.

Dr. Trotz also cited the financial support developed countries have provided at short notice to support Ukraine in its war with Russia. But such urgency, he said, is not reflected in the pace at which climate finance had been “dribbling out to developing countries.”

Dr. Trotz added that climate change is the most serious threat to small islands’ aspirations for attaining the UN’s Sustainable Development Goals, a series of targets set by the UN General Assembly in 2015 for completion by 2030.

“We are in a zone that is experiencing changed weather patterns, warming atmospheric and sea surface temperatures, rising sea level — all the consequences of climate change,” he said.