With the water smooth and glassy, conditions were perfect for the 2022 Painkiller Cup, where paddle-boarders raced to win prizes on Saturday. Because of the pandemic, this year’s race was …

END_OF_DOCUMENT_TOKEN_TO_BE_REPLACED 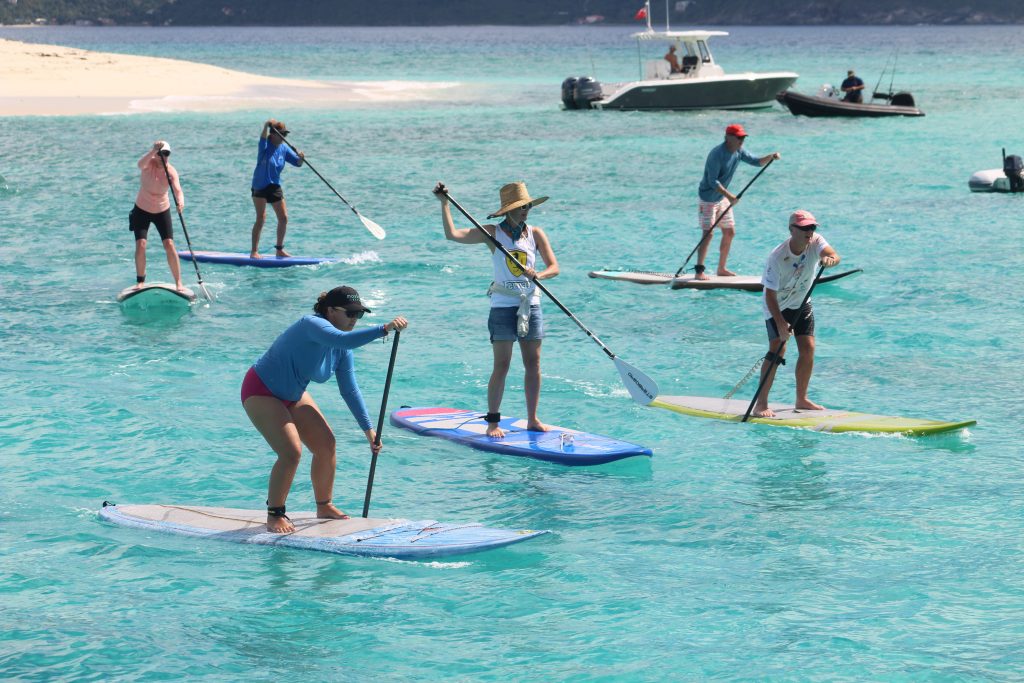 Nineteen paddlers take off from Sandy Cay and head toward Jost Van Dyke during the 2022 Painkiller Cup on Saturday. (Photo: ZARRIN TASNIM AHMED)

With the water smooth and glassy, conditions were perfect for the 2022 Painkiller Cup, where paddle-boarders raced to win prizes on Saturday.

Because of the pandemic, this year’s race was one of the smallest since the event launched 10 years ago, according to organiser Andy Morrell.

“I thought last year was the year it would be compromised by Covid, but it was worse this year,” Mr. Morrell said.“We had a lot of teams that had to withdraw.”

Still, there was plenty of competition. Five three-person teams of paddleboarders started in Trellis Bay on Saturday for a relay race to White Bay, Jost Van Dyke.

Nineteen paddlers competed in a shorter race from Sandy Cay to JVD, starting around noon and crossing the finish line about an hour later.

“It was hot,” said Mr. Morrell’s son Joshua, who took first place in the short race. “I fell into the water once and it felt good to cool off.”

Though a lack of wind made for great paddling, the racers had to contend with the hot sun on their back as they made their way toward White Bay. Joshua Morrell said a little wind came from the west when approaching White Bay, but it wasn’t enough to pose a challenge.

“When you get past the point [on JVD], you feel good,” he said. “From there, it’s the home stretch.”

Second place winner An- drew “Tubes” Thompson said that the race was well-organised and that it was a calm day to race.

“It’s fun and friendly and competitive,” he said. “It’s gotta be one of the best courses in the world.”

Organiser Mr. Morrell joined the race himself, placing fourth in the shorter race from Sandy Cay to Jost Van Dyke.

“As the organiser I never found the time to join in, but I did it last year and I did it again this year,” he said. “Me and my son [Adam] were neck and neck the whole time. Normally I’m more worried about the people in the water.”