The Palm Grove Shopping Centre, which was destined for demolition even before it was gutted by Hurricane Irma, is finally coming down, and City Manager Janis Braithwaite-Edwards said that the …

END_OF_DOCUMENT_TOKEN_TO_BE_REPLACED 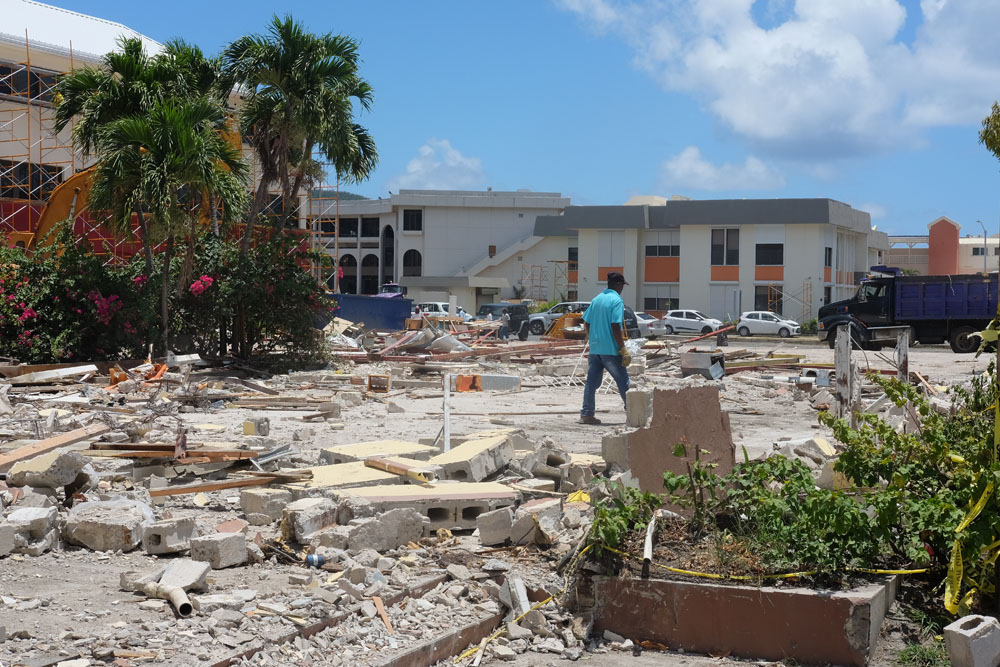 The Palm Grove Shopping Centre in Road Town was in the process of being demolished on Tuesday. (Photo: AMANDA ULRICH)

The Palm Grove Shopping Centre, which was destined for demolition even before it was gutted by Hurricane Irma, is finally coming down, and City Manager Janis Braithwaite-Edwards said that the step was a long time in coming.

“We knew it was structurally unsound for years,” she said. “It was in the middle of the city of Road Town, [and] it was deemed to be hazardous.”

Although the demolition happened quickly, Ms. Braithwaite-Edwards said the decision wasn’t made recently. “It had been made for months now,” she said. “It just happened that it came down now.”

Ms. Braithwaite-Edwards added that part of the motivation to raze the structure was that it had become a danger to the public.

“You have a situation where even despite the caution tape, people thought that they should walk through the building,” she said. “We didn’t want that kind of high traffic in the building.”

According to a report on the deliberations of the Standing Finance Committee, which met in March and April, an update on the structural integrity of the centre indicated that the building should not be rebuilt in its condition at the time.

Anthony McMaster, permanent secretary in the Ministry of Communications and Works, told the committee that the discussions were ongoing with the Wickhams Cay Development Authority, which owns the land, and the dozens of leaseholders, who had been ordered to vacate last year.

At the time of the committee meeting, the roof had already been removed, and the ministry had received a proposal from Rotarians to enclose the building, Mr. McMaster said.

Earlier this year, asbestos, a building fibre which can cause lung damage if inhaled, was found within a roof panel on the building, sparking health concerns.

However, according to Ms. Braithwaite-Edwards, an asbestos expert was called in to remove the asbestos before the current demolition began.

“We had the asbestos specialist remove what was left from the hurricane,” she said.

She added that there was no evidence that the asbestos was released into the atmosphere, “based on the fact that the panel on the roof was not disturbed [when removed].”

Thus, she said, there was no danger to the current demolition workers or the public.

As for what the future will hold for the space, Ms. Braithwaite-Edwards explained that no plans have been finalised.

However, she added that the leaseholders will still have their leases honoured. According to the SFC report, all of the Wickhams Cay lands have a 99-year lease arrangement.

“The government will have to provide space,” she said. “It will happen.”