Hundreds of Virgin Islands residents took joyously to the streets on Friday afternoon to welcome home 2018 Commonwealth Games gold medallist Kyron McMaster and his fellow athletes, who waved from …

END_OF_DOCUMENT_TOKEN_TO_BE_REPLACED 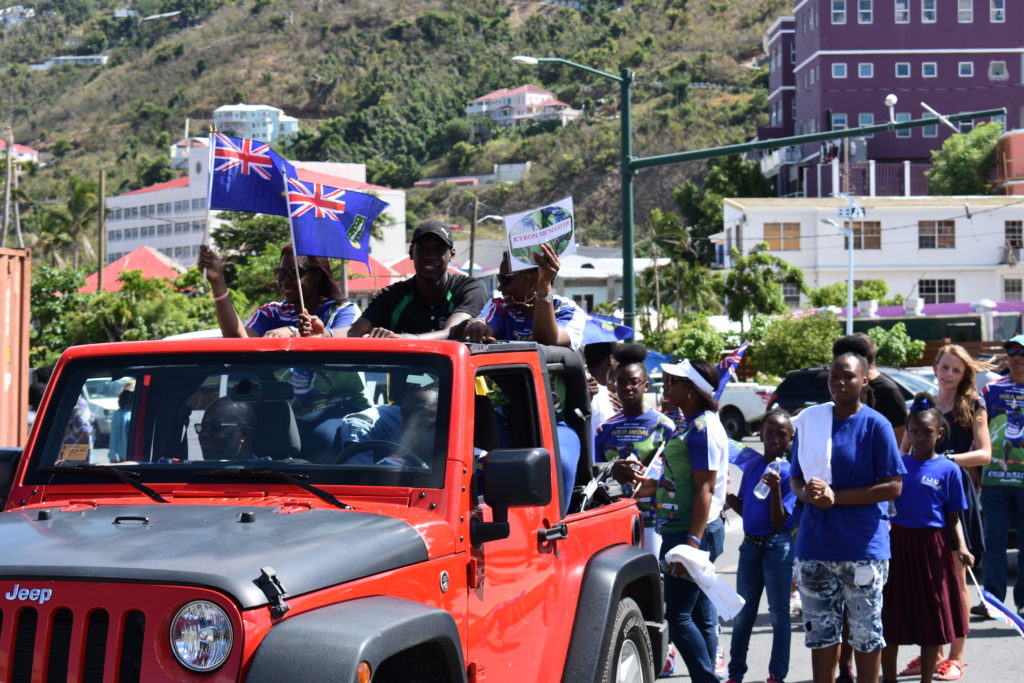 Kyron McMaster, gold medallist in the 2018 Commonwealth Games, rides through Road Town in the back of a jeep during a parade held Friday in honour of him and his fellow athletes. (Photo: CLAIRE SHEFCHIK)

Hundreds of Virgin Islands residents took joyously to the streets on Friday afternoon to welcome home 2018 Commonwealth Games gold medallist Kyron McMaster and his fellow athletes, who waved from the backs of jeeps as they rode from the A.O. Shirley Recreation Grounds to the Tortola Pier Park.

They were joined by flag-waving public figures, drummers and cheerleaders from Elmore Stoutt High School, and other spectators.

“If any territory in the world ever needed a good day, it was this territory,” Governor Gus Jaspert said in his remarks.

“What you’ve achieved, and your participation in the games and what it signifies, is not just personal: This is an achievement for the whole territory and one that provides an inspiration for us all.”

But Mr. McMaster reminded the crowd gathered at the Tortola Pier Park that his victory was dedicated to the memory of those who died during Hurricane Irma.

Among them was Mr. McMaster’s coach, Xavier “Dag” Samuels, whose role in the hurdler’s subsequent victory became an inspirational story covered around the globe.

“Winning this medal wasn’t only about winning it for me and my personal reasons or for coach [Samuels],” said Mr. McMaster, who received a cheque for $30,000 from the government for his gold in the 400 metre hurdles, the VI’s first-ever medal in the games.

“I’m sorry for those who lost family and friends. If my winning brought a light to you, I’m happy that I could have done that for you.”

Education and Culture Minister Myron Walwyn led a moment of silence for the late coach, who was the subject of several tributes during the event.

Ms. Harrigan-Scott, who is retiring from competition this year, added that when Mr. McMaster won, “I cried, because the thought of [Mr. Samuels] not being here is something that touches me greatly … because I come home every year and I expect to see him on the track. But even though he’s not here in person, his presence is greatly felt.”

Other speakers included Rey O’Neal, founder of the BVI Athletics Association; BVI Commonwealth Games Association President Ephraim Penn; and BVIAA Vice President Steve Augustine, who described the phone call he would typically receive from Mr. Samuels after one of Mr. McMaster’s victories, and the moment he realised it wouldn’t come.

“And I felt it necessary as I stand here on this public podium to say publicly: Kyron, you have done well, and Coach Samuels would be very, very proud,” Mr. Augustine said.

Competing with the best

Acting Premier Mark Vanterpool said that 2017 was a tough year, but that “it was through our wonderful BVI athletes that we remember who we were as a people. It was our athletes who sparked a flame of hope.”

Mr. Walwyn also said that for a small territory, the VI’s sporting achievements cannot be overstated.

“And we still put licks on them. That means that we have greatness here in the territory of the Virgin Islands.”

Students from Century House Montessori School shared some of the posters and messages they had written to explain what Mr. McMaster’s achievement meant to them.

“You make us feel like we are special,” student Malia Frett said.

Her classmate Noelani Scatliffe added, “You make us believe that we can do the same thing or anything that we put our minds to.”

In her closing speech, Ms. Harrigan-Scott reminded the young people in the crowd that in sports there are many defeats along the way to the big wins like Mr. McMaster’s.

“But that’s where the hard work is done,” she said. “If you lose, guess what? Think about what you did and get back up and go at it again.”

She also urged the territory’s leaders to give athletes what they need so that they can continue to succeed.

“Don’t let the celebration end here,” she advised. “Continue to work on our athletes and continue to support them, because it is a hard road and it is something that we live.”